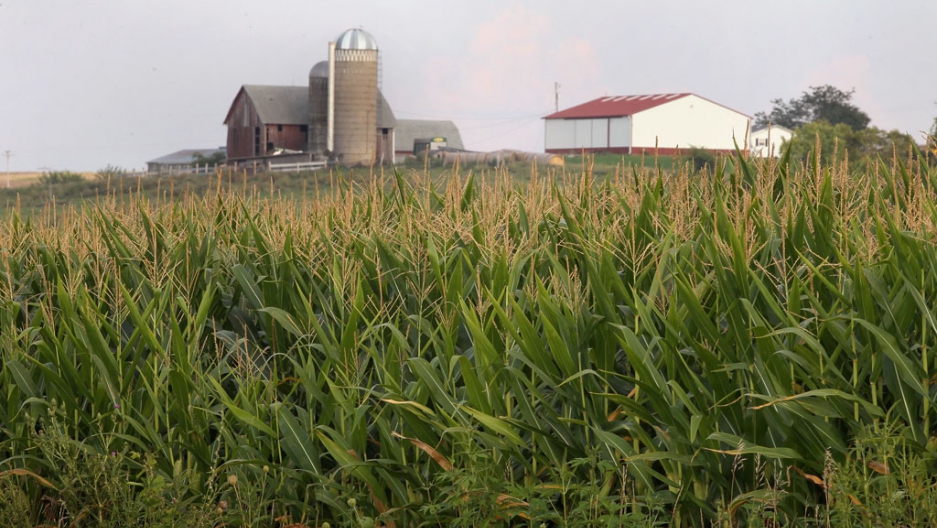 There's not much to laugh about in the ongoing drought crisis now hitting much of the United States.

The dry and hot conditions — which rival those of the Dust Bowl era — are at their worst in nearly a half-century.

The US Department of Agriculture warned yesterday that the severe drought will lead to higher prices for pork, beef, milk and especially poultry.

"The poultry category is the smallest animal category, and we expect to see more of an effect this year because they grow the fastest and will be first to be impacted by higher feed prices," Richard Volpe, a USDA economist said in the New York Times.

But when your job is to find the humor in even the darkest subjects, you must make do.

And that's what Stephen Colbert pulled off in this segment last night on The Colbert Report.

If anyone can make corn and wheat futures entertaining, it's this guy.

But Colbert went in an interesting direction: the rising cost of cheese, and what it means to him:

Here's the clip, courtesy of Comedy Central and featured here by our friends at Business Insider, who by the way, have been doing a fantastic job these past few weeks covering the drought and its market and economic implications:

Funny stuff. And much needed.

But the drought and its economic consequences, after all, is a serious topic for a lot of serious reasons.

For one the United States is a major global exporter of critical agricultural products, especially corn, wheat and soybeans.

A prolonged and serious drought could lead to crop shortages, and therefore to higher food prices not only in the US, but around the world.

Moreover, the timing of America's dry spell couldn't be worse with the US economy slowing, Europe a debt-ridden economic mess, and emerging economies worldwide — from China, to India, to Brazil and beyond — showing signs of weakness.

Food insecurity, meanwhile, can also be a key driver of political instability.

Taking all of these factors into account, GlobalPost correspondents around the world have been busy investigating the potential impact of America's drought.

We'll be launching an in-depth reporting series Thursday called The Drylands: Exporting America's Drought, that examines the impact from Asia, to the Americas, to Europe and elsewhere.

No, it won't be as funny as Stephen Colbert.

But we do wholeheartedly agree with one thing Colbert said last night: this s**t is definitely getting real.