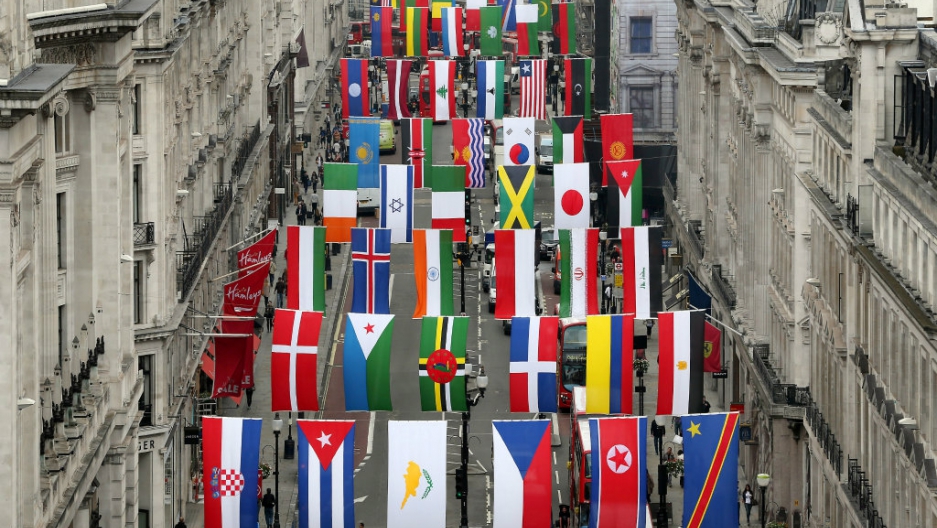 Flags of 200 nations are displayed on Regent Street in London. Crowds are expected to flock to the streets to catch a glimpse of the Olympics--for free.
Credit: Peter Macdiarmid
Share

LONDON, UK — Trying to snag a decent ticket for the 2012 London Olympics should have been made an Olympic sport in its own right.

In the UK, seats were allocated via a complicated lottery that saw many sports fans commit to spending thousands of dollars with no idea whether they would wind up trackside for the 100-meter dash, or way in the back at the Greco-Roman wrestling.

And when these were sold out — leaving many applicants empty handed — resourceful ticket hunters took to the internet, trying to snap up seats allocated to 215 other countries competing in the Games. Some with money to burn reportedly splashed up to $9,400 on the black market.

Ordinary ticket sales are now closed, although you can pick up a few blue chip seats at premium prices, or package deals involving long schleps from beige airport hotels to sports events you’ve barely heard of.

But if you’re still heading to London (or other venues around the UK) in the hope of seeing some of the world’s finest athletes without blowing an Olympic-sized wedge of cash, all is not lost.

If you know when and where to go, there are still plenty of free or budget opportunities to sample this year’s Games. But make sure you arrive early to beat the crowds. And because the UK summer is not to be trusted under any circumstances, pack an umbrella.

More from GlobalPost: London Olympics to be the most over-budget since 1996

With a route of 26.2 miles, this is by far the easiest event to see for free in the center of London. The marathon begins in the The Mall, the broad thoroughfare that leads up to Buckingham Palace. It turns onto the Embankment, running eastwards on the north bank of the Thames river, before looping around St. Paul’s Cathedral and the Tower of London. It then charges back down the Embankment to the Houses of Parliament, before returning to the Mall.
Why you should: Great chance to combine the Olympics and sightseeing in London.
Why you shouldn’t: Up to 1.5 million people are expected to show up on sidewalks with a 150,000 capacity.
Date: Women’s - August 5, Men’s - August 12

It’s hard to believe that watching distant swimmers splash up and down an ornamental pond for nearly two hours is anyone’s idea of fun, but the Serpentine lake in the bucolic surroundings of London’s Hyde Park make a great venue.
Why you should: If it’s sunny, you can combine an Olympic sport with a picnic in a royal park.
Why you shouldn’t: If it rains, it will be wretched.
Date: Women's - August 9, Men's - August 10

The triathlon was one of the first Olympic events to sell out, but with up to 90 percent of the three-stage race is held outside of ticketed areas, tens of thousands of people are expected to turn up for a free glimpse. The event begins with a 1,500 meter swim in the Hyde Park’s Serpentine lake, followed by a 40 kilometer bike ride around the city and then a 10 kilometer race through the park. Among the best vantage points will be on the cycle route as it passes Wellington Arch, Buckingham Palace, and South Carriage Drive.
Why you should: Three Olympic events for the price of none
Why you shouldn’t: Three times the crowds
Date: Women's - August 4, Men's - August 7

Athletes waddling at low speeds would seem to have more comedy than sporting appeal, but this surely raises the chances of getting a good view. The race walk route loops up and down the ticket-only Mall area, around the Queen Victoria monument that stands in front of Buckingham Palace, then up and down Constitution Hill (a hill in name only), where viewing is free.
Why you should: Olympic athletes will pass you every five minutes for nearly four hours.
Why you shouldn’t: Four hours of walking! That’s not exactly Usain Bolt.
Date: Men's 20km - 4 August, Men's 50km - August 11, Women's 20km - August 11

With a route of 250 kilometers most of which are wide-open to the public, the cycle road race has to be the best opportunity for free Olympic access — albeit one that may take some logistical planning. Much of the race runs along winding lanes that will be hard to reach when roads are closed to traffic. The best trick may be to choose a far-flung railway station, such as Gomshall, and be prepared for a long walk. It’s worth noting that the British cycling team has become hugely popular at home after scoring big at the Beijing Games in 2008. Fans will be out in their legions to see Tour de France sprint champion Mark Cavendish race for gold.
Why you should: A great excuse to see the English countryside
Why you shouldn’t: It’ll be full of English people
Dates: Men's - July 28, Women's - July 29, Time trials - August 1

Other budget venues
If none of the above appeal, there is always the option of watching the Olympics on one of the big screens that will be dotted about the capital. These will be ticket-only access, and details of how obtain these have not yet been made known.

There may also be tickets available for the Olympic park itself after the Games get underway. Once inside, visitors may be able to buy access to seats vacated by people heading home for the day.

If all else fails, and you have no aversion to traveling 100 miles out of London to the post-industrial city of Coventry, tickets to watch Belarus take on New Zealand at soccer are still in plentiful supply.