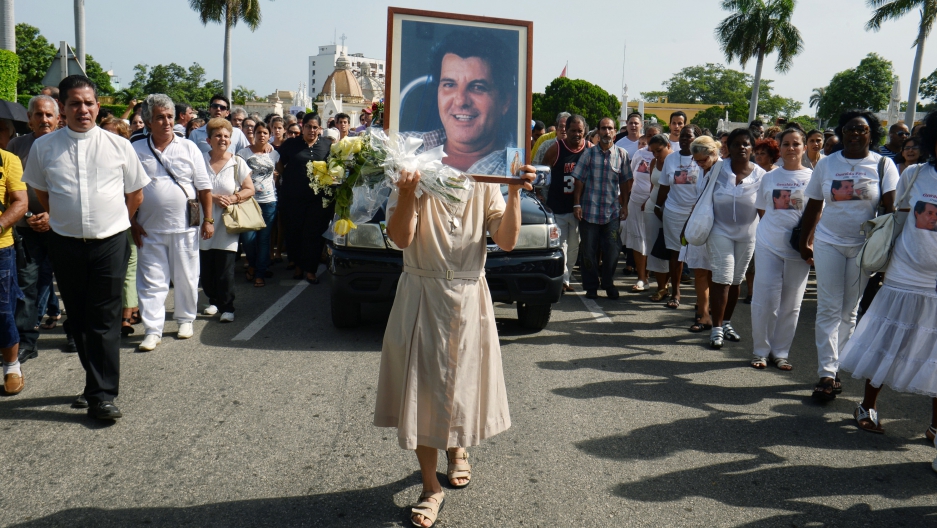 Whether he could have launched a Velvet Revolution like his late Czech friend Vaclav Havel did will remain forever a mystery. But even in death, Oswaldo Paya, the prominent Cuban dissident who died in a questionable car crash Sunday, still appears to be rattling the island.

Paya was “more than a dissident,” reads an op-ed by Spanish newspaper El Pais. His death “means a major setback for the future of democracy in Cuba,” it said.

As 60-year-old Paya was buried Tuesday, Cuban police reportedly beat and arrested at least 40 of his supporters who shouted “Libertad!” (freedom) at the funeral ceremony.

Among them was another leading dissident Guillermo Farinas, reported French wire AFP. Farinas is a winner of the European Parliament’s Sakharov Prize for Freedom of Thought — just like Paya was.

The BBC reports that most of those detainees, including Farinas, have since been freed.

But not without a word from Washington, first.

Here’s a statement issued Wednesday by the White House:

“We condemn the arrest of nearly 50 pro-democracy activists by the Cuban government during funeral ceremonies for Oswaldo Paya this week. Some of those arrested were reportedly beaten at the time of their detention. The fact that this occurred while hundreds of people gathered peacefully to commemorate the life of one of Cuba’s foremost human rights advocates only underscores the importance of Paya’s struggle on behalf of the Cuban people. Unfortunately, these arrests provide a stark demonstration of the climate of repression in Cuba, as demonstrated by the June 9 arrest of Jorge Luis Garcia Perez following his testimony to a US Senate Subcommittee regarding rights abuses in Cuba, and by hundreds of other arbitrary detentions in recent months.

We call on the Cuban government to respect internationally recognized fundamental freedoms, including freedom of speech, rather than arresting their citizens for peacefully exercising these universal rights that are protected and promoted by governments throughout the world. We look forward to the day when the Cuban people can live in the free society Oswaldo Paya worked so hard to bring about throughout his lifetime.”

President Barack Obama reportedly called the Paya family to offer condolences, telling them Oswaldo Paya had been "a tireless champion for greater civic and human rights in Cuba."

Paya’s family has been vocal about challenging the official version of what Cuba's Granma newspaper called “an unfortunate traffic accident.”

“According to witnesses at the scene, the incident occurred when the driver of a rented car lost control and hit a tree.”

The crash also killed another passenger, Harold Cepero, and injured a Spaniard and a Swede traveling with them.

Paya’s daughter and son have told reporters the activist had been receiving threats and that his car was more likely forced off the road by other motorists out to kill him.

Cuban police said they are investigating the circumstances of the crash.

“Why would the Cuban government regard Paya as enough of a threat to want him killed?" asked Carl Gershman, president of the National Endowment for Democracy, in this Washington Post op-ed. Apparently, Paya’s resume for activism was formidable. Gershman sums it up:

“He was one of the most prominent opponents of the Cuban dictatorship, a Catholic activist who founded the Christian Liberation Movement in 1988. He is best known for the Varela Project, a petition drive he launched in 2002 that called for free elections and other rights. That angered the Cuban government, which responded by forcing through the National Assembly a constitutional amendment making the communist system in Cuba irrevocable. It followed that with the 2003 'Black Spring,' arresting 75 of the most prominent Cuban activists that March.”

The article adds that Vaclav Havel, the late Czech playwright and dissident-turned-president, campaigned hard for Paya to win a Nobel Peace Prize, to no avail.

Now what's needed are detailed testimonies from the survivors: Jans Aron Modig and Angel Carromero, who was driving. That would help clear up this mystery. Until then, many seem to hold Paya's enemies — namely the Cuban government — accountable. The growing temptation to deem Paya a martyr will be too great to resist.