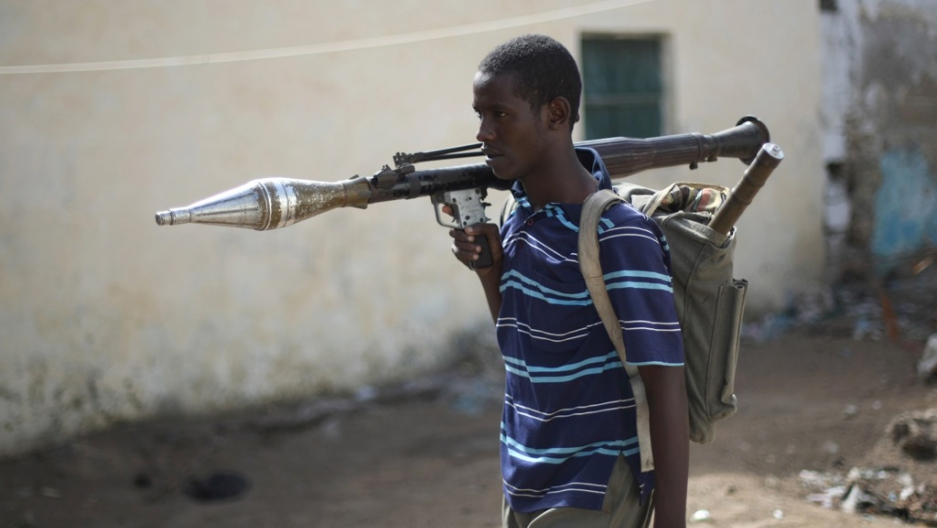 RAS KAMBONI, Somalia — The port town of Kismayo on Somalia’s southern coast must be among the worst places on the planet to live right now.

Not only is it governed by the fanatical Al Qaeda cousin Al Shabaab, it is also a battleground where a regional coalition of African armies is attempting to fight the extremist group.

While African Union officials claim that Al Shabaab will be defeated by next month, residents aren’t taking any chances. They are fleeing the city by the thousands.

Many of them land here, in the town of Ras Kamboni, about 300 kilometers to the south. And their testimony is providing a rare insight into what it’s like to live under Al Qaeda's rule.

More from GlobalPost: Peace, but little esle in rural Somalia

For Jama Jibril, a wage laborer, the public flogging he received for possessing a cigarette was the final straw.

For a time, Jibril tolerated the gangs of men patrolling the town, armed with scissors, who would chop inches off ankle length trousers in a bid to make residents follow what they said was the Prophet Mohamed’s dress code.

He learned to keep his hair closely cropped, for the scissor-wielding gangs monitored that as well. He suffered the discomfort of growing a full beard, giving up his neatly trimmed goatee. And always made sure his fingernails were short.

One day, as he walked home from work, Al Shabaab’s morality police stopped him. They searched his bag of groceries and found what Jibril said was a single cigarette. He had bought the contraband in the market using a code word known to the city’s smokers, he said.

He had planned to lock himself in his house, close the shutters and enjoy a smoke, one of the few pleasures left in a city where the traditional Somali past time of chewing khat, a mild stimulant, is banned.

But Jibril was caught. He was arrested on the spot, interrogated and urged to name his conspirators. Not wanting to give up his friends, he was locked up for two days.

“Us smokers are colleagues. We stick together. We smoke together,” he said.

After his release he was taken before a Shariah court, which sentenced him to a public flogging. It was carried out at once.

Jibril — who smoked as he retold this story from the safety of Ras Kamboni — was indignant because his punisher, he said, whipped him 11 times instead of 10.

More from GlobalPost: Sudan: Will riots bring down Omar al-Bashir

In recent years, Al Shabaab has made Kismayo its base of operations, earning as much as $50 million in annual revenues from the busy port. It has established training camps in the nearby forests, and allows pirate groups to use the secluded beaches, islands and mangrove swamps as way-stations.

Al Shabaab says it wants to place Somalia (and beyond) under the yolk of a draconian form of Shariah law, styled after the Taliban's rule. In February, the group declared itself the latest member of Al Qaeda’s global corporation.

While Al Shabaab is on the defensive in other parts of the region, and has been driven out of Mogadishu, Somalia’s capital, it still very much runs the show in Kismayo.

Former residents said the militants have created a police state, where everyone is under the watch of Al Shabaab spies.

Using a cell phone, listening to the radio, drinking one cup of tea too many, chewing khat, or skipping prayers, could all trigger a visit from the masked gunmen who stay in military camps encircling the town.

“You always fear when you see them,” said one resident who, like most GlobalPost spoke to, did not want to be named. “Whether innocent or not, you fear. You don’t know when they might come.”

At prayer time, residents said, pickup trucks mounted with loudspeakers drive through the streets beaconing everyone to the mosques. One resident recalled how, in the past, Al Shabaab militants would hold Quranic recitals where youngsters competed to win hand grenades, rifles and ammunition.

Residents who had been forced to watch public executions said that convicted murderers were shot by firing squad while adulterers were stoned to death. Asked what happened to thieves, one man, made a circle around his wrist with a thumb and index finger to indicate amputation.

And so, as Al Shabaab’s rule becomes increasingly intolerable, and as the long-threatened African Union offensive looms, many are choosing to run.

“People are leaving because they are afraid the fighting will catch up with them,” said another former resident.