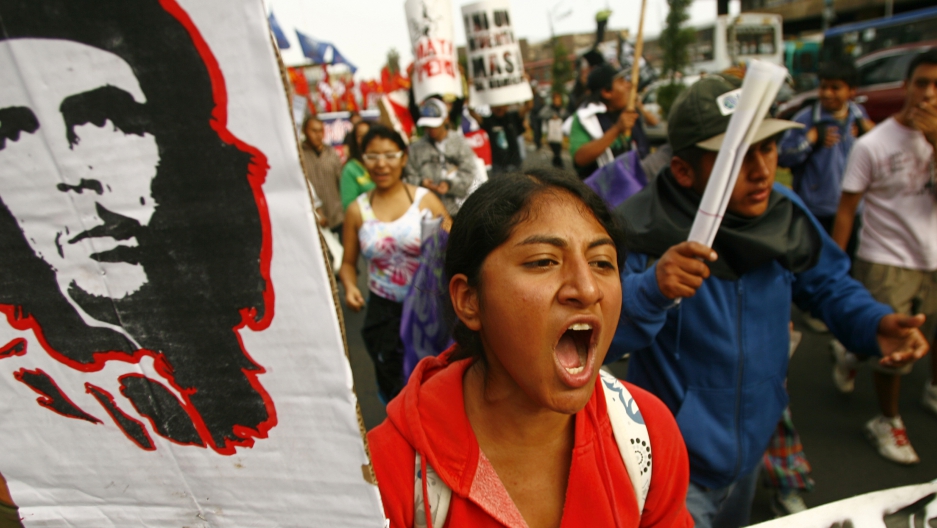 A woman holding a banner with the portrait of Argentine-born revolurtionary leader Ernesto 'Che' Guevara, shouts slogans as she takes part in a protest against the Conga mining project of US corporation Newmont, in Lima on July 12, 2012.
Credit: GERALDO CASO
Share

Juan Jiménez, a human rights lawyer, has been named as Peru's new Prime Minister, with Prensa Latina citing sources close to the presidential palace as saying that President Ollanta Humala was scheduled to swear Jiménez in within hours.

The appointment of Jiménez, the country's Justice Minister, comes in the wake of the retirement of Oscar Valdes, criticized over his handling of social issues and ongoing protests against foreign-owned mining projects in the country.

According to Reuters, Valdes — a former army officer — led a deadly crackdown on protesters opposed to Newmont Mining's $5 billion Conga gold mining project in the northern region of Cajamarca.

Locals fear that the project — Peru's biggest investment, according to Mining News Today, whose majority owner is the Colorado-based Newmont Mining Co. — will contaminate their water supply.

Five people have been killed in the protests, which earlier this month led Jiménez to declare a state of emergency, and suspend civil liberties, in three of Peru’s northern provinces.

Three people were killed, two of them reportedly shot to death, after several thousand protesters attacked a provincial town hall and battled police and soldiers in the town of Celendin, Latin America News Dispatch reported.

Jiménez was then commissioned by Humala to arrange mediation with protesters in what the press interpreted as a move to replace Valdes with Jiménez, Prensa Latina wrote.

Valdes, meantime, reportedly announced via Twitter that he was stepping down:

"Dear friends, I wanted to share with you the end of my turn as the head of the Cabinet, thanking you for your support and constructive criticism," he tweeted, Reuters wrote.

According to Reuters, Peru's Constitution requires all ministers to offer their resignations whenever a prime minister quits, and more changes are likely as Peruvian leaders often shuffle their Cabinets on July 28, Peruvian Independence Day.

However, despite the ongoing protests, Mines and Energy Minister Jorge Merino will stay in his post.

Humala — whose own approval rating has fallen to a low of 40 percent — will likely also reappoint Finance Minister Luis Miguel Castilla, a favorite of investors.