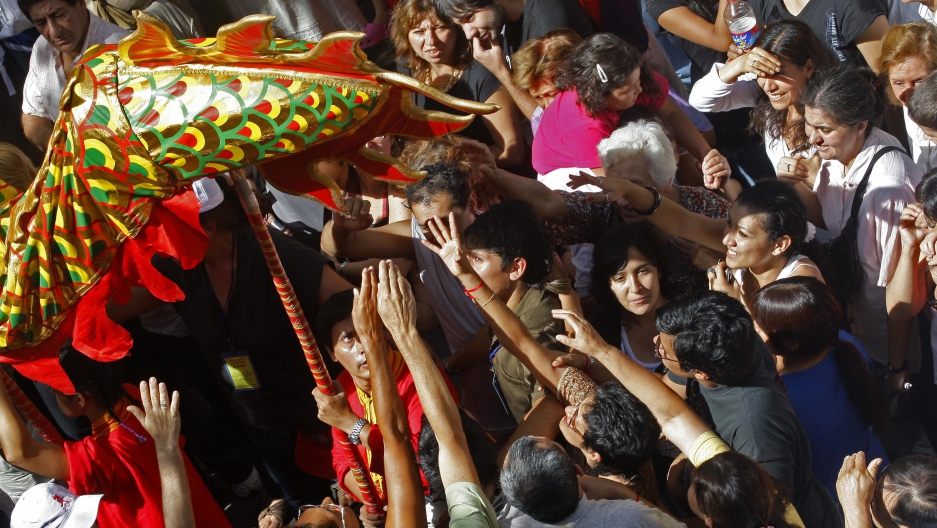 LIMA, Peru — The global economic malaise may finally be about to hit Latin America’s booming economies as the motor of their growth, Chinese demand, starts to rev down.

From Mexico to Argentina, most nations in the region have been growing admirably, even as the euro zone teeters on the brink of disaster and the US economy appears stuck in second gear.

In the first quarter of this year, Peru’s GDP grew at an annualized rate of 6 percent, Argentina’s at 5.2 percent, Chile’s at 5.6 percent, Colombia’s at 4.7 percent, and Mexico’s at 4.6 percent, according to investment consultancy Trading Economics.

Almost the only blot in the region’s copy book was Brazil, which expanded at a meager 0.8 percent, with the government caught between slaying inflation and stimulating the economy.

With the exception of Brazil’s relatively poor performance, government officials in most developed nations would kill for those kinds of numbers.

Yet much of that exceptional growth has been driven by China’s apparently insatiable hunger for Latin American goods, above all, raw materials.

Since China opened up to the global economy by joining the World Trade Organization in 2001, Latin American exports to the Asian giant have grown by more than 1,000 percent.

But in recent months a range of domestic problems, from labor unrest to a housing bubble, married to the uncertainty in Europe and sluggish US consumption, have seen the Asian powerhouse’s astonishing growth cool.

On July 16, the International Monetary Fund (IMF) came out with a sobering message: China, now the world’s second largest economy, could be in for a “hard landing.”

In the short term, the agency also slashed China’s anticipated 2012 growth from 8 percent to 7.8 percent.

That might seem like a downgrade from “brilliant” to merely “outstanding,” but the knock-on effect for Latin America is a more dramatic decline in forecast regional growth for the year, from 3.7 percent to 3.4 percent.

The IMF's report came after second-quarter data put China's economic growth at 7.6 percent. This quarter, a Chinese central bank adviser has said growth may slide further to 7.4 percent. News like that tends to cause Latin American stocks to tumble.

In its breakneck quest to join the developed world, China’s economy gobbles up vast quantities of Latin America’s principal exports, including metals, oil, gas and timber, as it upgrades basic infrastructure across the country.

From the Suite Spot: When the BRICS crumble

For example, China currently accounts for 40 percent of the global copper consumption of 19 million tons per year, most of which comes from Latin America. The metal, used in electronics and cabling, is Chile’s top export and Peru’s third.

Alvaro Merino, head of research for Chile’s National Mining Society (SONAMI by its Spanish initials), told GlobalPost that the short-term prospects for copper sales to China would be characterized by “high volatility.”

“The uncertainty is very extended in world markets right now, due to the complex situation experienced by the European economy and deceleration in China,” he added.

With mining providing the lion’s share of taxes to public coffers in both Peru and Chile, that represents a major headache for economic planning in both countries.

It will particularly hurt Peru where the government of President Ollanta Humala depends on mining to finance its social programs aimed at lifting millions of Peruvians out of abject poverty.

According to one poll of business leaders here this week, 57 percent now expect the global downturn to finally hit the country.

Meanwhile, Colombia, Latin America’s fourth largest economy, saw its trade surplus shrink dramatically, to $20 million in May, compared to $457 million for the same month in 2011, on total exports of just over $5 billion. Analysts blamed falling prices for crude oil and coal, two of Colombia’s chief exports.

Yet there is one bright spot for Latin America; thanks to the drought in the US, soy prices have rocketed.

Some 40 percent of global soy exports head to China, the world’s biggest soy consumer, yet demand for this staple remains relatively unaffected there. The combination of those two factors saw soy set a new record price last week on world markets.

That is excellent news for Brazil, Argentina and Paraguay, the second, third and sixth top producers of soy. Their aggregate annual production is just over 84 million tons, now dwarfing that of the US, the world’s largest source of the bean.

And according to Merino, of Chile’s SONAMI, the long-term prospects for Latin America to continue selling large quantities of minerals to China remain excellent, with demand even likely to outstrip supply.

“You have to remember that the last five-year plan of the Chinese government is aimed at strengthening internal demand and that naturally favors the use of metals, especially copper, due to the works of infrastructure, construction and telecommunications,” he added.

If that is correct, then despite the current blip, China will continue to displace the US as the main driver of economic growth south of the Rio Grande.

More from GlobalPost: Costa Rica wants to be China's springboard to America