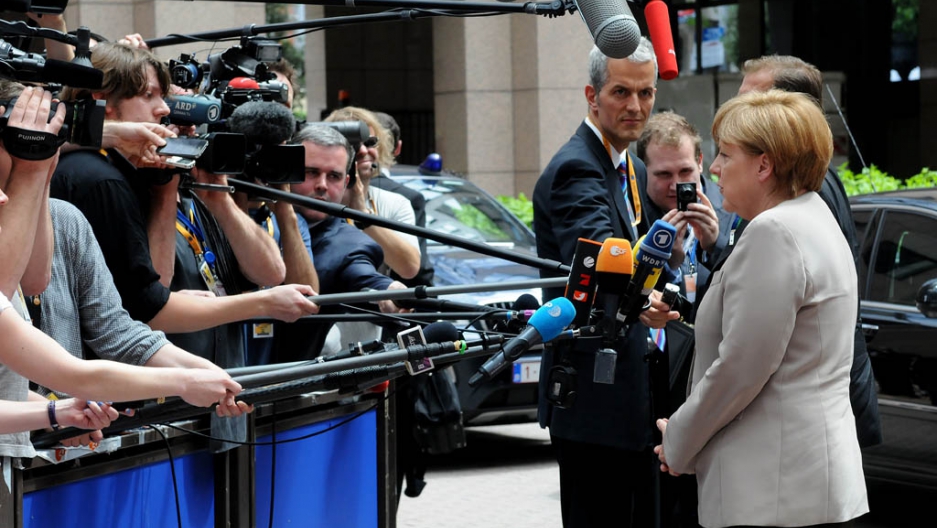 German Chancellor Angela Merkel talks to media prior to a meeting of European Union leaders in Brussels on June 28, 2012. Germany's finance ministry says it will remain a "safe haven" for Europe after Moody's slashed its AAA credit rating to negative.
Credit: THIERRY CHARLIER
Share

Germany is defending its credit worthiness after Moody's changed its outlook on the country's AAA rating from "stable" to "negative," the first step to an official downgrade.

According to Bloomberg, Chancellor Angela Merkel’s government said Germany will remain a stable force for Europe in the face of rising fears over debt levels in Italy, Spain and Greece. The largest economy in the eurozone is under pressure to contain the fallout from rising borrowing costs and budget cuts.

“Germany will, through solid economic and financial policy, defend its ‘safe haven’ status and continue to responsibly maintain its anchor role in the euro zone,” the German finance ministry said in an e-mailed statement, published by Bloomberg. “Together with its partners, it will do everything to overcome the sovereign debt crisis as rapidly as possible.”

The Berlin-based ministry said the country remains “in a very sound economic and financial situation” and that the current threat is “not new.”

Moody’s cited the increased likelihood of Greece exiting the euro area and the impact that would have on other eurozone members, including Italy and Spain, as reasons for dimming the ratings outlook of Germany, the Netherlands and Luxemburg.

The Financial Times is reporting that European Commission President Jose Manuel Barroso will travel to Athens this week to meet with Greek prime minister Antonis Samaras to discuss Greece’s progress toward meeting the demands of their 174 billion euro bailout.