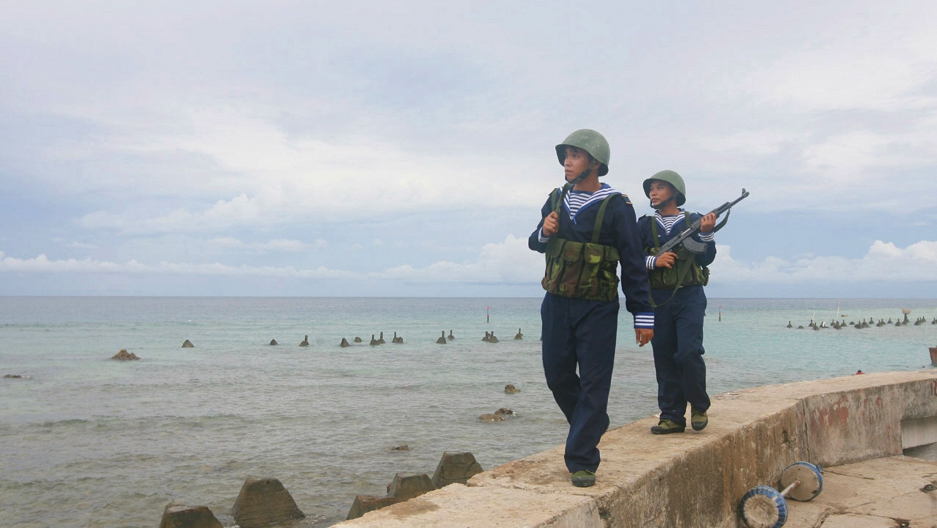 This picture taken by Vietnam News Agency and released on June 14, 2011 shows Vietnamese sailors patrolling on Phan Vinh Island in the Spratly archipelago. Vietnam put on a show of military strength in the tense South China Sea on June 13, risking the ire of Beijing in the face of a deepening maritime rift with its powerful neighbor.
Credit: Vietnam News Agency
Share

Perhaps China, in the end, will have asserted its dominance over the South China Sea one cruise ship, military outpost and hastily assembled city at a time.

Armed skirmishes are appearing increasingly unlikely in the oil-rich oceanic zone. Varied parts of the region are defiantly claimed by Vietnam, the Philippines, Taiwan and others. Almost all of it is claimed by China.

In lieu of heavy conflict, China is patiently channeling its abundant resources into building a presence on these unpopulated specks of land bit by bit.

First, we have China announcing plans this week to erect a (likely small) military garrison in an island chain known as the Paracels that is largely claimed by Vietnam, the BBC reports. This outpost will defend a "city" called Sansha that, until last month, didn't even exist.

Today, the Philippine Star reports that China will construct an air strip on an island in the Subi Reef claimed by the Philippines. The island is already home to several Chinese-built structures and a large radar, the paper reports.

The Chinese are also indulging in a bit of surf-and-sand statecraft. In the government-owned outlet Xinhua, officials are playing up the disputed Xisha Islands as equal in beauty Thailand's beaches and promising to bring in cruise ships. Chinese holidaymakers will have to sleep on the boat, however, as the islands are almost totally barren.

Make no mistake: in an all-out battle, China's navy would almost certainly crush the Vietnamese or Philippine navies.

But why waste men, torpedoes and national reputation on humiliating weaker enemies through force?

The government is content to use its comparative economic might to gradually build a presence on these South China Sea islands.

Eventually, the Philippines and Vietnam may be in the undesirable position of claiming islands filled with Chinese troops, Chinese buildings and Chinese resorts are, somehow, not Chinese.