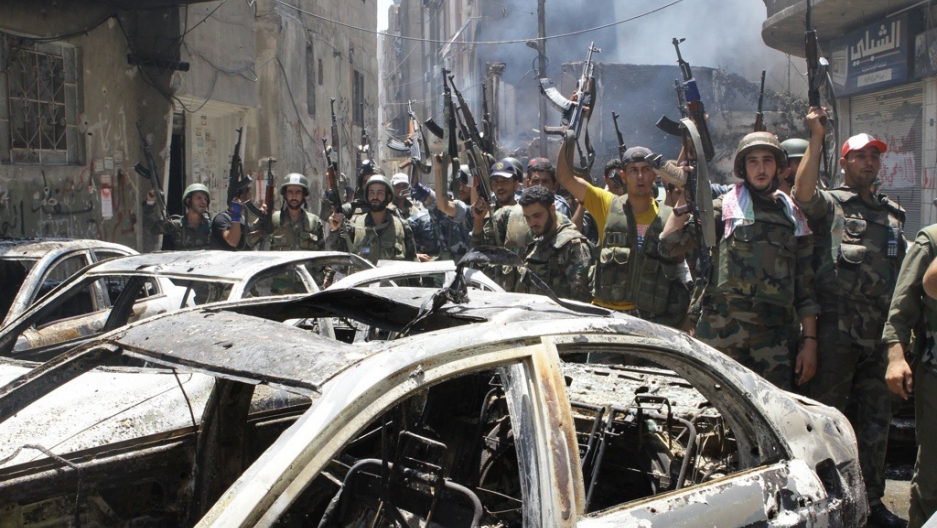 Syrian soldiers celebrate in the Midan area of Damascus on July 20, 2012. Syrian regime forces routed rebel fighters from the Damascus neighborhood, causing many residents to flee for the countryside.
Credit: Louai Beshara
Share

DAMASCUS, Syria — On the first day of the feast time, Abu Omar and his family found themselves surrounded by olives.

“It’s so dangerous to spend nights in the open fields with little children, but what else can we do? We were forced out of our house,” he said.

Instead of relaxing at home — enjoying the Mediterranean’s favorite fruit to break the day-long Ramadan fast — Omar was taking shelter among the silver-leafed olive trees, having fled the battles in Syria’s capital for the relative safety of its surrounding countryside.

Fighting between Republican Guard soldiers and Syrian rebels reached new extremes in the capital over the weekend, as Syrian President Bashar al-Assad attempted to restore control after last week’s stunning assassination of four of his security chiefs.

The battles have forced many Syrians living in Damascus, including Omar and his wife and three children, to flee.

More from GlobalPost: Syria: Inside the battle for Damascus

Driven from Midan, an ancient neighborhood for Sunni Damascene traders that's now been laid to waste by regime forces, the rebels have retreated to the run-down slums of Hajjar al-Aswad and the Yarmouk Palestinian refugee camp, where they stormed the local police station, setting it ablaze and looting weapons.

Like tens of thousands displaced from the capital, Abu Omar's family has been uprooted at one of the most trying times of the year. It is the Islamic holy month of fasting, during which observant Muslims do not eat or drink during daylight hours. With the setting of the sun, families traditionally gather to break the fast with lavish feasts, often spending more on food during Ramadan than in a normal month.

With today’s prices, however, they’ll likely be getting less, however much they spend.

Commodity prices in Damascus, a city of some five million people already burdened by inflation and shortages, have soared over the past week.

Abu Ghassem, a truck driver from Daraa, one of Syria’s main farming regions and the birthplace of the rebellion, told GlobalPost that he had not been able to enter Damascus for five days due to the running battles across many of the city’s southern suburbs. The inability to deliver food has sent the price of bread and other food skyrocketing.

“In Syria the rich can buy what they need, even if prices double, but the poor cannot do this,” said Abu Yasser, a 30-year-old from the devastated satellite town of Duma, about 10 miles northeast of Damascus. Almost all of Duma's 500,000 residents have fled amid intense bombardment by the regime.

In May, Yasser moved with his wife, two children, and elderly parents from Duma to Midan, hoping to escape the regime’s wrath. But last week he was uprooted again, as rebels briefly held the opposition stronghold before tanks and elite troops rained fire down on the ancient quarter. Yasser found a single room to rent in the relative quiet of Bab Touma, a Christian neighborhood on the edge of Old Damascus.

But even with money, Yasser said he struggled to find treatment for his 60-year-old mother who has a heart condition. Three state-run hospitals turned them away over the weekend, he said, either for lack of space or because hospital staff had simply not come in to work. Their routes, they said, were blocked by ongoing military attacks, the absence of public transport and the lack of affordable fuel for their cars. Yasser eventually paid triple the normal fee at a private clinic.

“We live as refugees but we are not angry,” said Abu Ammar, whose family fled to the countryside when regime troops attacked. “We are spending hard times, but we can manage our life. But we cannot live with a killer regime.”

Last night, Abu Omar managed to find a new shelter for his family, moving from the olive groves into a school opened by sympathetic local officials in nearby Sahnaya. Breaking their fast, the family ate a simple meal of fried eggplant with potato and some salad. Fresh, cold water — much in demand after a thirsty day in the summer sun — came from the local mosque, the school having no supply itself.

By late Monday, regime forces appeared to have taken back control of several rebellious neighborhoods in and around the capital, including Qaboun, Midan, Zahara, Tadamun and Nahr Aysha.

But clashes continued between rebels and regime forces in almost as many other areas, including Barza, Qaddam, Meze, Kafar Sousah and Hajar al-Aswad. In Qaboun, particularly, residents have paid a heavy price for their defiance. Bombarded by tanks and helicopters for several days, their electricity and water cut off for a week, the neighborhood in northeast Damascus has been largely abandoned.

“I just arrived back here to my house. Everything is broken,” Abu Mohammed, a state employee told GlobalPost in Qaboun on Monday.

“The army stole 30,000 Syrian Pounds ($429) that was in a box in our bedroom. All the food in the fridge is ruined, so I’m picking up the tinned food and some clothes to take back to my brother’s house, where we are now five families living in just three rooms.”

In its efforts to convince supporters of a decisive victory in the wake of the week-long fighting, state media over the weekend paraded the now familiar horror show of burned and mangled bodies, foreign passports and handcuffed prisoners, evidence, it said, of the “terrorists” plotting to take over the country.

“The security situation will be under control in one or two days,” pledged Foreign Ministry spokesman Jihad Makdissi on Monday, the first official comment in the five days since the assassination of the security chiefs.

Apparently attempting to allay fears in the West over Syria’s huge stockpile of chemical weapons, which the regime has been moving to consolidate, Makdissi pledged the state would “never” use the WMDs on its own people, “unless Syria faces external aggression.”

How that promise plays out within the regime’s own dogged doctrine that it has long been under attack from “foreign-backed terrorists” is a threat few either inside or outside Syria dare to predict.

More certain, among the many displaced by the burgeoning urban warfare gripping Damascus, is that the regime’s latest timetable for stability is unlikely to be met.

“The regime keeps saying two days, or two weeks to finish this or that, but we have been living in this crisis for a year and half,” said Amid, a 25-year-old from Midan. “The regime couldn’t solve the bread and fuel crisis in two months, so how is it going to finish the armed opposition in just two days?”

By GlobalPost reporter contributed to this story from Damascus. Hugh Macleod and Annasofie Flamand contributed from Beirut, Lebanon.