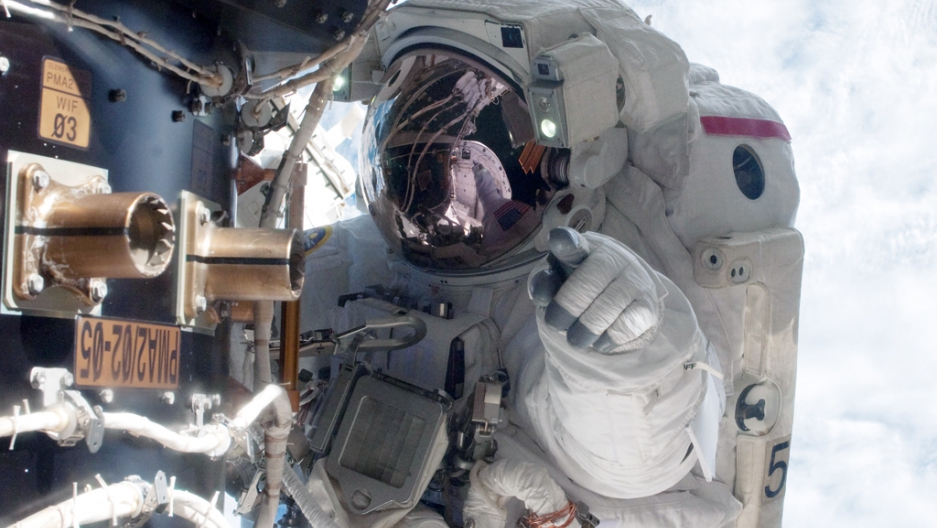 In this handout image provided by NASA, an astronaut waits at the International Space Station docked to the space shuttle Atlantis. Researchers are seeking volunteers to simulate a trip to Mars, by wearing space suits and eating food cooked with limited ingredients.
Credit: NASA
Share

Astronauts coming back from spacewalks have some surprising descriptions of what space smells like.

According to The Atlantic, some say the smell reminds them of seared steak, or maybe something metallic. Some describe it as sweet, like raspberries or rum.

Not that they can smell anything from inside their suits while bobbing around in space. Life's Little Mysteries reported that the odor clings to their suits, helmets, gloves and tools, and can only be smelled when the astronauts step back into the space station. NASA chemist Steven Pearce, who was hired to recreate the space odor on Earth for astronaut training purposes, said the metallic aspect of the scent could come from high-energy vibrations of ions.

According to Discover Magazine, what the astronauts probably smell are polycyclic aromatic hydrocarbons, which form during combustion during the death of a star. These compounds can also be found in earth-bound materials, like bacon, and are considered carcinogenic.

Discover Magazine also reported that knowing the chemistry of space could lead to the prediction of all kinds of smells in its corners. Three years ago, Sagittarius B2, a dust cloud in the middle of the Milky Way, was found to include the ethyl formate molecule, which is a compound that helps give raspberries their flavor and rum its scent.

Take it from an expert. Astronaut Don Pettit put it like this, 10 years ago:

"Each time, when I repressed the airlock, opened the hatch and welcomed two tired workers inside, a peculiar odor tickled my olfactory senses. At first I couldn't quite place it. It must have come from the air ducts that re-pressed the compartment. Then I noticed that this smell was on their suit, helmet, gloves, and tools. It was more pronounced on fabrics than on metal or plastic surfaces. It is hard to describe this smell; it is definitely not the olfactory equivalent to describing the palette sensations of some new food as 'tastes like chicken.' The best description I can come up with is metallic; a rather pleasant sweet metallic sensation. It reminded me of my college summers where I labored for many hours with an arc welding torch repairing heavy equipment for a small logging outfit. It reminded me of pleasant sweet smelling welding fumes. That is the smell of space."