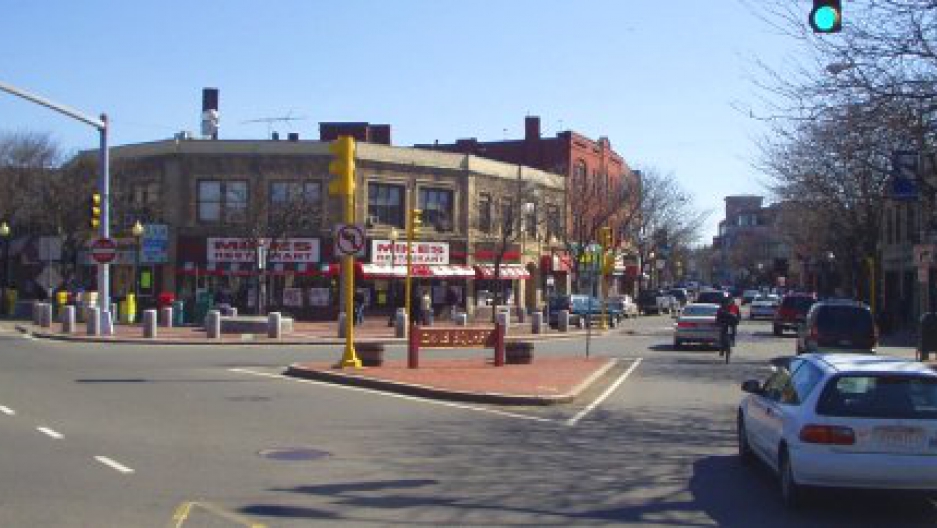 Davis Square in Somerville, Mass., is home to an increasingly popular farmers market. (Photo by Brian Corr via Wikimedia Commons.)

Using grants from the federal Centers for Disease Control and Prevention and The Robert Wood Johnson Foundation, the city of Somerville, Mass., has embarked on an ambitious plan to fight childhood obesity.

School lunches are healthier, city streets are safer and, so far at least, there are concret signs the initiative is working.

So what's the city's secret? Are there actions other cities can emulate in their own efforts to cut down on obesity and the diseases it can cause.

Mayor Joseph Curtatone spoke with Here & Now’s Robin Young. Questions and answers have been edited for clarity and brevity, where appropriate.

Young: You started “Shape Up Somerville” ten years ago to fight child obesity. How bad was it?

Curtatone: When I took office in 2004, Tufts University showed me data of our first and third graders, and it showed that more than 40 percent of our children were either obese or at risk of being obese — worse than the national trend. That raised a question for me about how we approach the systems of a community —  the environmental policy, the public safety policy, the built environment, the recreation, your food policies.

Young: We know you now consider that everything that happens in Somerville — from sidewalks to programs — has to take children’s health into consideration. So give us an example.

Curtatone: For instance, before “Shape Up Somerville,” almost all, or at least the majority, of school food was already pre-processed. So you either opened it, heated it in a microwave or it was frozen. Now, the majority is prepared on-site. More whole grains, fresh fruits and vegetables all day long.

We also focused on aspects of the built environment, making Somerville appropriate for active living. Making our streets more walkable, focusing on the most dangerous intersections and putting in place pedestrian safety and traffic mitigation measures, revamping our recreation program. And we’ve taken the “Shape Up Somerville” approach and applied it to every program and policy in the city because this is not about losing weight, this is about how we live.

Young: So more bike lanes, more bike corrals for parking bicycles. But what else? Lets say you’re building a bridge, what do you do? Make sure it has a sidewalk?

Curtatone: Anytime we build a major roadway, we look to incorporate the aspects of smart-streets — bike lanes, share-roads, bump-outs. We’re looking long-range to bring in more light rail with the green line expansion. We’ve built, or are in the process of building or designing, almost 30 new parks, playgrounds, recreation spaces and community gardens. We’re making access to good and wholesome affordable food easier.

Curtatone: The farmers markets have been increasingly popular. We’ve always had one in Davis Square, but we have a new farmers market in Union Square, and we also have the state’s first-ever winter farmers market at the armory.

Also, we have our first mobile farmers market, bringing produce into communities that can’t access traditional markets. We found parts of our community that were under served, where people work two jobs to support their families, don’t have the transportation. Those people weren’t going to those markets, so we’re bringing mobile markets to our senior centers and to our housing developments. They’re increasingly popular.

Young: Two-thirds of the kids in your schools come from poor families that are on food stamps or they receive free or reduced-price school lunches. And now food stamps are accepted at farmers markets and $1 gets you $2 worth of food vouchers. Are you seeing more low-income residents go to the farmers markets because of that?

Curtatone: We are seeing more go to farmers markets, also our mobile market has exceeded all expectations.

Young: We understand that parking spots were converted from parallel parking to angled parking so that car doors wouldn’t open in bike lanes. Can you give me some more specific examples of how the city has improved its streets?

Curtatone: We use a different type of paint on crosswalks that is more reflective and visible to make it safer to cross the street. How we police our streets is really changing as well. If our streets are safe, people will want to let their children out running around the streets and being more active.

Young: What are you seeing in results? We understand that after three years, Tufts tested eight-year-olds, and they found that they had, on average, a pound less in weight gain than kids in other communities. But since then it’s been hard to measure results because the studies are ongoing. Do you have a sense that you’re getting something for the money you’ve invested in this?

Curtatone: Absolutely. We’ve seen from our heath surveys that more people, our teens especially, are choosing healthier lifestyles and activities — more physical activities. We’re getting great reviews on our food policies in our schools.

We learned from our mistakes in the past, from 40-50 year ago. I always say this — and I believe in the greatness of the American city — you can bring a community or city down overnight, but it’ll take a generation or more to bring it back. We’re well on our way.