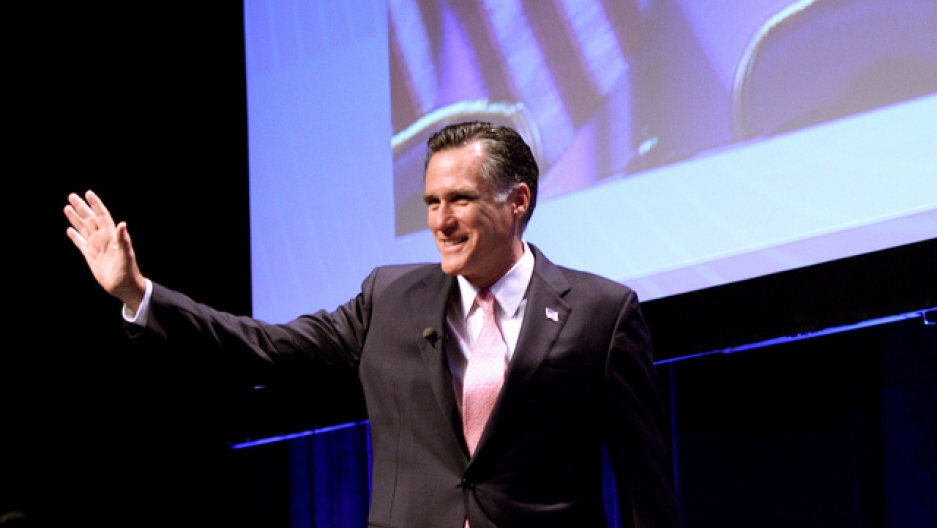 Share
When the London Summer Olympics get under way on Friday, Mitt Romney plans to be there. The presumptive Republican presidential nominee expects to attend the opening ceremonies. It's the first stop in a three-country tour designed to beef up his foreign policy credentials. The World's Jason Margolis has more. Four years ago, Republican presidential nominee John McCain was criticizing his Democratic opponent for lacking foreign policy experience. So, Senator Obama took a trip. He visited Afghanistan, Iraq, Jordan and Israel. He also went to Paris, London, and Berlin. There, an estimated 200,000 people turned up to hear him speak. hat speech and trip showed candidate Obama looking presidential on a world stage. Mitt Romney could also benefit from an overseas trip like that, says Daniel Drezner with The Fletcher School at Tufts University DANIEL DREZNER: "Romney as the challenger needs to at least meet some sort of credible bar of foreign policy gravitas. And the problem with Romney is that he doesn't have any official foreign policy experience. He has a few things that he can point to, to highlight the fact that he has at least thought about world affairs. But it's sort of a nice way that he can get a visual of meeting with officials or what have you. And the visuals look good." And you can be certain, Romney's campaign staff have carefully selected the locations for those visuals. ELLIOTT ABRAMS: "The timing of this trip is built around the Olympics." That's Elliott Abrams with the Council on Foreign Relations. He served in the Reagan and George W. Bush Administrations. ELLIOTT ABRAMS: "It's a reminder to people that he once ran the Olympics. He saved the Salt Lake City Olympics, as he likes to put it, and I think is fair." After London, Romney heads to Israel. That stop also makes sense to Daniel Drezner at Tufts. DANIEL DREZNER: "Because it's an open secret that Barack Obama and Benjamin Netanyahu do not get along. The Obama administration's initiatives with respect to peace between Palestine and Israel have failed badly. This is going to be an area where Romney can honestly criticize the Obama Administration." Romney has faulted the president for pressing Israel to make concessions to the Palestinians. Romney's campaign web site says the president has "diminished US authority and painted both Israel and ourselves into a corner." Romney has said that if elected, Israel would be his first foreign trip as president. Obama hasn't yet made a presidential visit to Israel, and he's gotten a lot of flack for it. Never mind that Ronald Reagan and George H.W. Bush also didn't visit Israel when they were president. And George W. Bush didn't visit until the eighth year of his presidency. But Mitt Romney has a personal friendship with Israeli Prime Minister Benjamin Netanyahu that dates back to the 1970's when both men worked for a US consulting group. And when Romney repeats his line that he'll be a better friend to Israel than Barack Obama, he'll soon have the visuals to support that statement. TERRI BIMES: "It matters in sort of symbolic terms." That's political scientist Terri Bimes at UC Berkeley. Beyond the image though, how might American policies toward Israel differ under a President Romney? Not much. TERRI BIMES: "It's not like Obama has not been supportive of Israel." For example, American foreign aid to Israel has increased considerably under President Obama. The next stop for Mitt Romney's overseas tour will be another close friend for the US. DANIEL DREZNER: "He's going on to Poland… Again, Daniel Drezner. DANIEL DREZNER: "…where he can highlight what he feels has been the Obama Administration's betrayal of Eastern European Allies by pursuing a "reset" with Russia." Poles were also stung when the Obama Administration scrapped a Bush Administration plan to build missile defenses in Poland. Romney was also scheduled to visit Germany on his trip, but his campaign recently cancelled that stop. Again, this is where Barack Obama whipped Europeans into a frenzy four years ago. I asked Elliott Abrams if Romney risked looking foolish, or unpopular, if he didn't get a similar reception. ELLIOTT ABRAMS: "I'm not so sure because the popularity of President Obama all over Europe is significantly lower than it was four years ago, and it does enable the Romney campaign to make that argument, that no, he's not a rock star, he's a serious and solid guy." That issue also came up four years ago. Shortly after Obama's Berlin speech, the McCain campaign ran this advertisement comparing Barack Obama with Britney Spears and Paris Hilton. But this upcoming trip isn't about Barack Obama. It's about the Romney campaign trying to get that perfect visual of their candidate looking perfectly presidential on a world stage. And if the trip isn't a roaring success… it probably won't matter all that much, says Terri Bimes at UC Berkeley. TERRI BIMES: "If you look at the 2008 election, Obama was not hurt by his lack of foreign policy experience, and I don't think Romney will be hurt by it either in 2012."