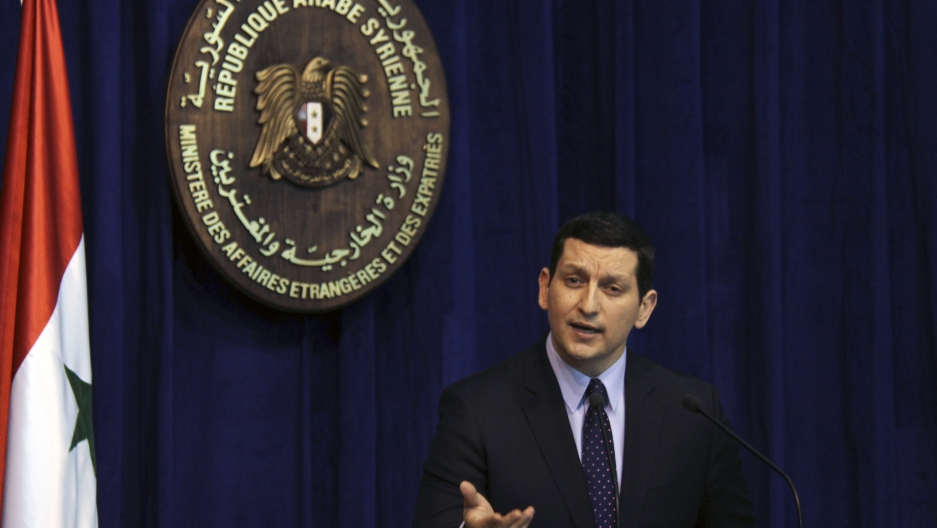 Syrian Foreign Ministry Spokesman Jihad Makdissi speaks during a news conference in Damascus July 23, 2012, where he admitted the country has weapons of mass destruction, but pledged not to use them on its citizens. (Photo by Reuters.)

Clashes continued across Syria over the weekend, with violence reported from Aleppo to Damascus.

Monday morning, the Syrian government for the first time admitted it has a stockpile of chemical weapons, though it insisted it would use them only in the event of a foreign invasion, and not on its own citizens.

As the conflict drags on, the war's toll has increasingly been paid by Syria’s youngest citizens.

In a new report out Monday, the United Kingdom-based human rights advocacy group War Child says it believes as many as 1,300 children have been killed in the conflict.

"Unfortunately, I had to witness one of my friends passing away, in front of my eyes," said Rhonda, a Syrian child, 12, not even a teenager, now safe in Lebanon. "We were sitting in a circle and the bullet came through her neck and went out the back."

A bomb hit Rhonda's house, hitting her mother, father and brother. The three survived, but that in combination with the friend's death was enough to send the whole family fleeing to Lebanon.

Rhonda's goal in life is to be an attorney, so she could help members of her family who are put in jail. It's not just idle concerns. Two of her older siblings were already jailed in Syria.

When they were released, they could no longer walk, she said.

Kate Adams, a policy and advocacy officer at War Child, said the danger is huge for children in Syria. In her organization's report, they documented six concrete examples of violations of United Nations regulations, by both the Syrian government and rebel forces.

Among them: recruitment of child soldiers, denial of access to aid and attacks on schools and hospitals, as well as abductions.

"It's increasing even since we've written this report. Over the weekend, we've seen tightening violence around Damascus and Aleppo, which are both very densely populated," Adams said. "So the risk to children is increasing."

She added that the Free Syrian Army has recruited child soldiers and the Syrian government has been known to use children as young as 8.

The long-term impact on these children will have a devastating impact for years to come, Adams said.

"The impacts are inter-generational and they're huge. And they're inherited by the next generation, unless there's really careful help that's given in between," she said.

Adams cited similar circumstances that have plagued Lebanon for years as the trajectory Syria could have. War Child staff in Lebanon have reported increased violence there as well, she added.