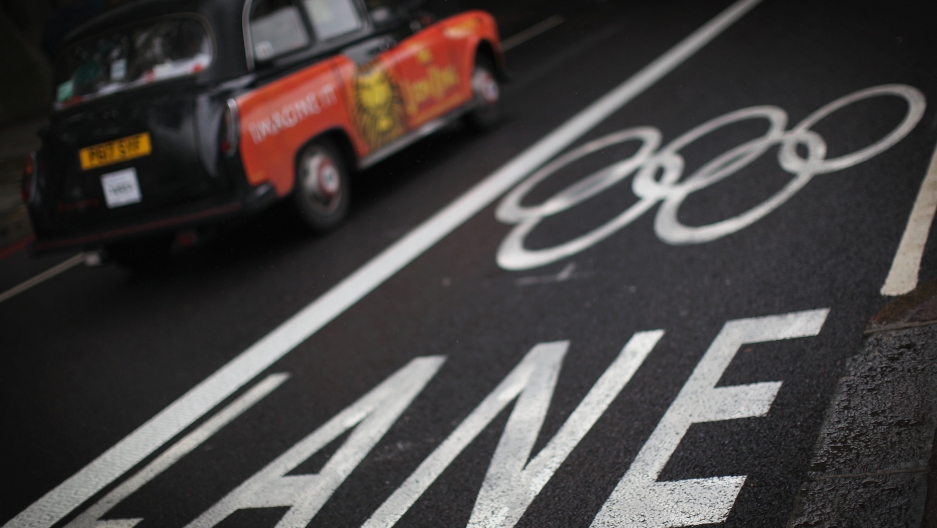 “They’ve had seven years to plan for this,” he fumes, “and they’ve messed it up completely!”

A glance at a London street map should be enough to impress how much trouble hosting such a major event presents under the best of circumstances. Most of the tangled spider’s web of city roads was laid out more than three centuries ago. It’s been gridlocked ever since.

Organizers have designated nearly 30 miles of roads for exclusive use by athletes and Olympics officials to enable them to reach their destinations in time for sporting events. In theory at least, traffic-free corridors will enable speedy travel between key venues.

The authorities have also designated a wider, 109-mile “Olympic route network” along which traffic lights will give priority to Olympic vehicles and roads will open and close to the public according to a perplexing timetable.

Commuters have been warned to expect delays. A campaign by Transport for London — which runs rail and bus services — has urged residents to adapt by changing working hours, staggering commutes and bicycling or walking to work.

Londoners have grumbled about the general inconvenience, but the decision to exclude most of the population from the dedicated traffic lanes under threat of a $200 fine has proved especially controversial.

Critics say the measure will create misery for millions in a city whose rail and road systems already struggle to meet peak demands, and worry the special routes will be abused.

“Transport is going to be a nightmare,” said Conservative lawmaker John Whittingdale, who chairs a parliamentary committee on sport. “There is a real risk of people sitting there stationary in their cars and then some black BMW goes whizzing past in a near-empty lane.”

Some have complained about privileges granted to corporate sponsors. They say fast access to the Olympic stadium, located in an unglamorous area of east London, will make it especially easy for VIPs to lodge in upscale hotels in the city center.

The unhappiness has reinforced the nickname “Zil lanes,” for the tracks set aside for Zil limousines that once ferried Communist Party officials across Soviet-era Moscow.

As public anger grows, some believe the lanes are posing organizers bigger trouble than any potential transport-related Olympic delays.

Taxi drivers are particularly upset about being excluded. They expect profits to decline because many of the ordinary Londoners who are their main customers are expected to avoid the roads.

Protests by cabbies have brought central London to a standstill, and they are threatening to stage more.

Taxi driver McNamara, who is general secretary of London’s Licensed Taxi Drivers Association, dismisses government predictions the Olympics will be “wonderful” for cabbies. “People who know the business don’t agree,” he said. “It’s going to hit our revenues greatly.”

Cyclists are also outraged. Despite official encouragement for them to hit the road during the games, bicycles will also be barred from most Olympic routes.

Transport for London has defended its measures by saying the special routes will handle 1,300 Olympic vehicles every hour. “It’s not going to be one VIP every 20 minutes,” a spokesman said.

Although the city’s creaking underground rail network will relieve some of the strain, the Tube’s capacity is already stretched to its limit. Many major lines with infrastructure dating back more than a century suffer frequent breakdowns.

Hundreds of thousands of low-income workers will be unable to alter their working hours to avoid peak congestion. Among them, Joanna Bem, a waitress who commutes from East London to her job in the city center, says she finds the thought of even more people using the metro “scary.”

“It’s normally crowded anyway and nothing works properly,” she said. “If the trains break down in the next few weeks, it’s going to be terrible.”

More from GlobalPost: Knock knock. Who's there? A tax cheat

Although London may still pull off the games without a major hitch, the signs haven’t been good.

Even with special lanes at their disposal, bus drivers ferrying athletes from London’s Heathrow airport to the Olympic village across town have managed to lose their way and wind up stuck in the very traffic jams the routes were supposed to avoid.

Among the first arrivals, US track and field athlete Kerron Clement offered his verdict via Twitter. “Um, so we’ve been lost on the road for 4hrs. Not a good first impression London.”