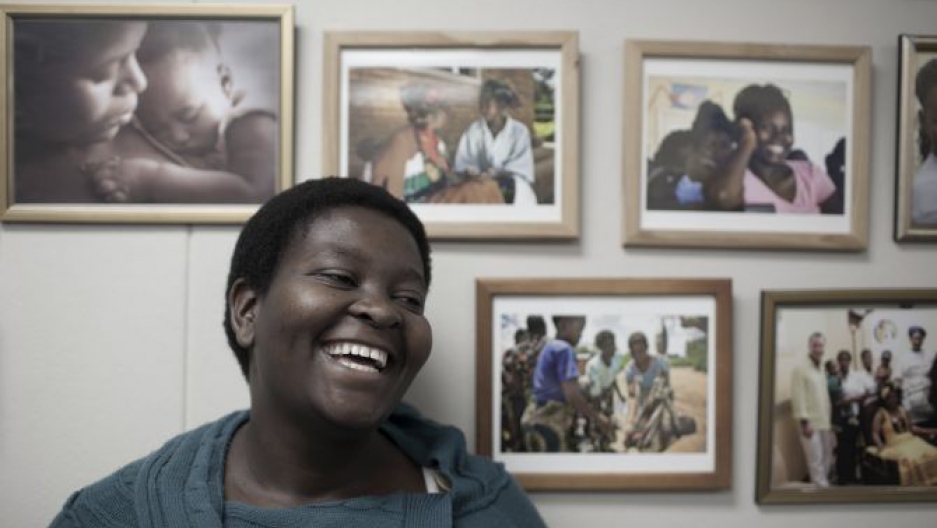 CAPE TOWN, South Africa — There are tens of thousands of stories about the rapid expansion of community health workers across the world. Here are two of them, one in Africa and one in America.

When Nozi Samela arrived one day recently in the Cape Town mothers2mothers office, she walked with purpose through the hallways.

She had only recently become a communications associate for the organization, which works with HIV-positive mothers and sets up programs to prevent transmission from mother to child.

Samela was stylish in her black flats and salmon-colored trench coat, with tote bag in hand. Late for a visit outside the office, she walked outside and apologized to her driver with a coy, soft-eyed smile — one that surely has gotten her out of many a situation in her lifetime.

“Something is different about you,” the driver said.

“Perhaps it’s my hair,” she responded with a straight face.

“No, you’re glowing,” he says. He was not going to let her get off of the hook that easily. “Are you with child?”

Moments later, that same gentle smile swept across her face. “How did you know?” she asked.

“I know a pregnant woman when I see one,” he replied.

They both laughed and made their way to the hospital.

Samela was not always the same hardworking businesswoman and glowing mother-to-be she is now.

Born in the Eastern Cape to a single mother, Samela was orphaned at age seven and left to fend for herself with her older and younger brother. The three young children relocated to Cape Town where they grew up moving between the townships of Khayelitsha and Philippi. Their aunt and uncle struggled to care for the young children.

The first in her family to graduate high school, Samela had plans to attend university. When it came time to enroll, she found out that her aunt had spent the money she had saved for enrollment. Instead of telling her other family members what happened, she lied, telling them that she had not gotten in. She took a job as a gas station attendant to make ends meet and help contribute to the family income.

When she was 20, Samela became pregnant; that is when she found out that she was HIV-positive and when she first discovered mothers2mothers.

At the mothers2mothers office in her local clinic, Samela began visiting support groups and was able to build up the confidence, with encouragement of her mentor mother, to disclose her positive status to her aunt and cousins.

“If there was anything mean that people were saying, they never said it to my face,” she remembered after disclosing. “Sometimes they would gather and chat behind my back, but if you don’t have the courage to say things to my face, then it is not me worth worrying about it.”

Nine months later, while continuing to attend support groups and educational sessions at the mothers2mothers clinic, Samela gave birth to a healthy, HIV-negative baby boy. Shortly after that, she became a mothers2mothers mentor mother in the same clinic that once helped her.

Samela only worked one day a week, but was determined to gain more hours.

“I told myself my son is never going to go hungry or go through what I went through,” she said.

Soon enough, Samela was working four days a week and with guidance from the organization opened her first bank account and was able to buy a shack in Khayelitsha to call her own.

At home, Samela began using the skills she gained by working with mothers2mothers to help care for her cousin who was slowly dying from AIDS. She nursed her until her death and helped care for her children.

Being a mentor mother was something Samela embraced. She even became an ambassador for the organization and traveled to the United States to speak out about her own story as an HIV-positive mother.

One cold Saturday morning, things changed. Samela and her three-year-old son, Khanya, were watching the film Toy Story. That afternoon, Khanya asked to go outside and play with a friend. He never returned. After 30 minutes, Samela began to look for her son. Unable to find him, she recruited help from her family to search the township. Four hours later, Khanya was still nowhere to be found.

“A boy who had been outside said to me that there had been a young boy wearing dark clothes who had been hit by a car near the garage,” she remembered.

Samela went to the nearest hospital, which happened to be the one where she worked.

“Nobody would talk to me and tell me what happened.” she said. “Finally, they said ‘sit down.’ I knew what that meant.”

Khanya had been dead upon arrival.

“A few weeks later I hated the organization,” Samela said. “It was called mothers2mothers and I was no longer a mother.”

She stopped showing up for work, and thought that she would be fired. Instead, Samela received more support from her mothers2mothers colleagues, who would come visit her more often than her own family. Many of her co-workers could relate to her loss.

Samela returned to work, mentoring mothers in Khayelitsha, but noticeably was not as committed as she had once been. “I had to make myself get up every morning and go even though I wanted to quit,” she said.

A few months later, a young mother came to Samela’s clinic; she had just lost her child. “She was crying and I don’t like to see people cry,” Samela said. She decided to share her own story with the patient. This moment reminded Samela what her work meant not only to herself but also to others. Within two years, she was promoted to communications associate in the central Cape Town office.

More from GlobalPost: A Daughter's Journey: Seeking answers on HIV/AIDS

“I don’t know what would have happened to me if there hadn’t been a mothers2mothers in that clinic in Khayelitsha,” she said, shaking her head.

Last year, Samela began dating again and said she knew that “it is time for me to be a mother again. Maybe my son would have wanted a little brother or sister.”

She became pregnant again. In the mothers2mothers support groups, she shared feelings of wanting her child to be normal and healthy. She has sorted out a perinatal treatment plan to lower the risk to almost zero that her child will not be born with HIV.

Samela’s baby girl is due at the end of October, which seems far away, but it is hard for Samela to contain her excitement.

“If I do say so, I am a good mother,” she said, flashing that smile once more.

Halfway across the world, Susan Rodriguez is making the same efforts as Samela — making connections in their own communities while finding a way to serve their own needs as HIV-positive women.

In 1995, Rodriguez was diagnosed with HIV, and shortly after she was widowed with three children, one of whom was also positive. Rodriguez contracted the disease from her late husband, who died from AIDS. She was shocked.

“I knew I needed to get information to live,” she said. She knew other women needed information, too.

To meet these need, Rodriguez founded SMART University to serve women and youth infected with, or affected by, HIV. Rodriguez’s goal was to create a safe space for women and youth to receive the education they needed concerning health and prevention, while receiving support and empowerment from others like them.

While many of the employees at SMART have backgrounds in social work, some, like Rodriguez’s 21-year-old daughter who runs the SMART youth program, do not. And like mothers2mothers, SMART started because HIV-positive people needed services. The idea was that those who also were HIV-positive could help improve their health. They understood the needs of the patients.

The organization, Rodriguez said, addresses general issues that apply to women and their health as well as addressing the structural issues that the women may be facing in their community, such as barriers of access to healthy foods and education.

“SMART serves as a bridge between doctors, patients and experts.” Rodriguez said.

These programs are extremely important in poor neighborhoods, she said, which is why she feels that SMART serves a niche market in the underserved East Harlem community.

At meetings about healthy living, Rodriguez shows up to work early to cut fruit and put food out so that members can have a snack when they arrive. And after a cooking lesson, attendees take home leftovers and extra ingredients supplied by SMART, which serves as a food pantry on these occasions.

“We want people to practice what we preach, so we do the work and ask later where we are going to get the money to do it,” Rodriguez said. “We break down the information in a pragmatic way to give our women the tools they need to incorporate healthy choices into their lives.”

But the program has a huge challenge: funding. Unfortunately, according to Rodriguez, federal funding often overlooks grassroots programs like hers. This is bewildering to her, as she believes that people working for SMART and other community health programs often have the most impact on people’s lives.

“These women go through a transition and renew themselves, which leads to finding their own voices and becoming community advocates themselves,” Rodriguez said.

SMART University relies on public and private foundations for funding. In the tough economy, however, the money for the organization is dwindling and Rodriguez says that while supporting a frontline organization like hers is important, she is unsure how long their doors will be open.

But despite hard financial times, Rodriguez will not give up: “This is a very sensitive issue for women and one of us knows that we represent thousands of women. There is no quick fix.”