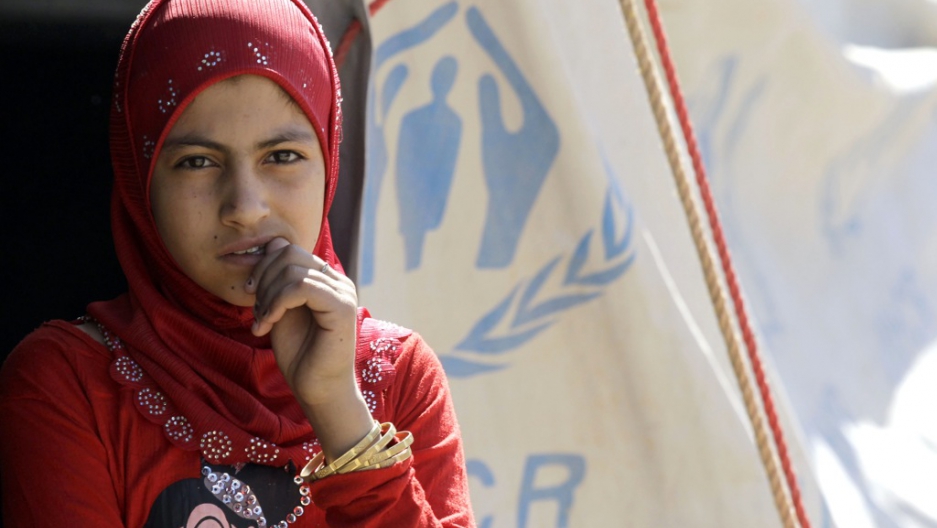 A Syrian refugee girl, who fled the violence in he country, stands outside a refugee camp close to the Syrian border, on July 17, 2012. According to the UNHCR, the number of refugees has tripled since April, reaching 110,000 at camps in Turkey, Lebanon, Iraq and Jordan.
Credit: Khalil Mazraawi
Share

YAYLADAG, Turkey — The border was less than an hour’s walk from their villages, but they slowly crawled for two days in the broiling heat across the steep mountains.

They said they feared for their lives all the way.

Terrified by widespread bombing unleashed by government forces, Syrian Turkmen from several villages picked up and fled several days ago. They formed a long weary line of more than 2,500 souls.

“They arrived hungry and sick. They didn’t have food or medicine or clothes or even water,” said Dr. Mohammed Sheik Ibrahim, a Syrian Turkmen who fled to Turkey eight months ago. “They are like people who are a little dead.”

As the tide of Syrian refugees has swollen, Turkish officials have scrambled to find places for them, and Syrian expatriate medical experts, who have rushed here to help, have become increasingly worried about a largely civilian population suffering from the wounds of an all-out war.

With 43,000 Syrian refugees in camps spread across southeastern Turkey, a 75 percent increase in only a few months, Turkish officials said they are rushing to open two more camps that can house another 10,000 in each. Until this week, they had talked about opening only one more camp.

They said the extra camps are needed because about 1,000 Syrians a day are showing up at their border. Many more are nearby but can’t travel because they fear encountering the Syrian army.

Across the region, the United Nations High Commission for Refugees (UNHCR) said this week that the number of refugees has tripled since April, reaching 110,000 at camps in Turkey, Lebanon, Iraq and Jordan. It added that the actual count is likely to be “significantly higher,” since many refugees do not register with the UN or different governments agencies.

UNHCR officials said their appeal for international support, which would go toward UN agencies and nongovernmental groups serving the Syrians, has received only 26 percent of the money sought. Such a low response, UNHCR officials said in a news release, is causing a “profound impact on the humanitarian support.”

Turkish officials likewise say the response to their appeal for international support has been “negligible.”

Until two months ago, Turkey had said it would bear nearly all the costs of caring for the refugees. It has also relied on the UN for tents and other basic equipment.

“We are doing our best and we will continue to do our best. If we don’t get help from others, we will continue to use our national budget,” said Suphi Atan, a spokesman for the Turkish Foreign Ministry. Turkey has spent $200 million on the refugees so far, he added.

Once registered as refugees, the Syrian get full access to Turkish hospitals. But many have wounds that stretch the capabilities of the government hospitals.

That’s where Syrian expatriate physicians have stepped in.

They have set up special clinics, brought in costly medicines or transferred the wounded to private hospitals for more specialized care at their expense.

At one special clinic set up in Antakya by the Syrians, Dr. Hasan Najjar, an elderly Syrian physician who lives in Germany, recalled his surprise at the level of injuries suffered by the refugees.

“I’ve been a doctor for 55 years and in all of my life I’ve never seen these kinds of injuries. Some bones are so shattered they can’t be replaced. We have to buy bones and it costs $10,000 for 10 grams of bone,” he said.

More from GlobalPost: Not everyone hates Syrian President Bashar al-Assad

Equally difficult, he said, is treating victims who suffer extensive phosphorous burns that they apparently suffered in bombings.

Among the Syrian physicians, the only psychiatrist is Moustafa, who asked that his last name not be used. He arrived here only a few days ago from the UK and has since rushed from camp to camp counseling refugees.

“There is almost no psychiatric support,” he said taking a break between long trips to the refugee camps sprawled across southeastern Turkey. “There’s only me,” he added.

“They suffer all degrees of problems from panic attacks to depression to post traumatic shock,” he said.

Indeed, he worries about the long-lasting emotional problems. “Often these are the kinds of problems that don’t respond well to treatment.”

In one camp he briefly counseled a man who was fleeing with his 7-month pregnant wife when Syrian gunfire hit their car, killing his wife and the driver. In another he met with a 15-year-old who was shot in both legs by Syrian forces as they left his home after searching it.

“What really strikes me is the randomness of the killing,” he said. “I ask them, ‘Were you actually fighting?’ and most of them said ‘No.’"

When the Turkmen villagers arrived at the border, the Turks opened a brand new camp for them here in Yayladag, a small town that looks up at Syrian towns surrounding them. The Turks had no choice. There was no room in the other camps closer to the border.

“They are mostly old people and women and children. The young men stayed behind to fight,” said Cihan Mullah Ahmet, the head of the local Turkmen association here. “The children cry all the time about the bombs and the old people just cry.”

The Pulitzer Center for Crisis Reporting supported the reporting for this story.