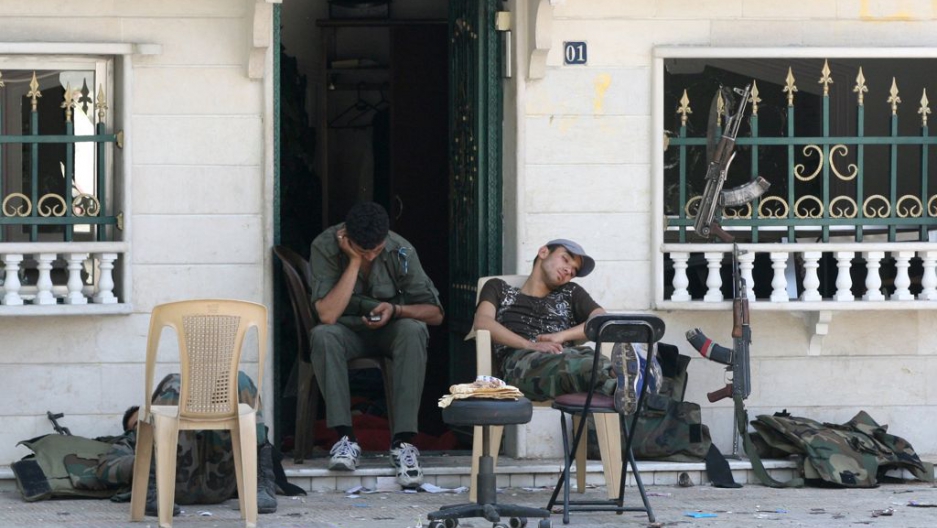 DAMASCUS, Syria, and BEIRUT, Lebanon — From the Tomb of the Unknown soldier high on Qassioun Mountain, those burying the security chiefs who for decades had tortured and killed to maintain the Assad family's grip on power would have heard the explosions, seen and smelt the fires, as control turned to chaos in the capital below and guns sounded the potential death knell of the dictatorship.

Lorries, vans, taxies and cars were streaming out of Damascus yesterday as Syria's dictator did what no leader of one of the world's most ancient cities had ever done before: turn his own guns on the capital.

As artillery fired indiscriminately from the mountain down onto the rebellious neighborhoods that now ring the center of power, helicopter gunships thudded overhead, firing on crowds trying to bury their dead. Tanks trundled down highways, smashing into communities where rebel fighters find support and sanctuary.

Few images could be more fitting of the drastic situation now engulfing Syria than the coffin of the country’s once most feared military hardman, Assef Shakwat, being honored amid the sounds of a civil war he helped trigger and from which few believe the regime he served so loyally can ever recover.

More from GlobalPost: Syria: Is the regime crumbling?

The brother-in-law he fought and ultimately died for did not attend the funeral. President Bashar al-Assad, whose sister was married to Shawkat, did not emerge from his "People's Palace," just a few hundred meters from the military parade ground on Qassioun. Nor too did his younger brother Maher, who competed with Shawkat for title of regime’s most ruthless and once shot him in the gut over a family tiff.

"The army will finish those armed gangs in a few days and then everything will return back to how it was," said Haidar, a student and member of the same minority sect of Allawites to which the president and most ruling elites belong.

Events on the ground spoke to a very different reality. A GlobalPost reporter, a lifelong resident of Syria’s capital, summed it up in the opening sentence of his dispatch: "Damascus is different. Everything is changed."

Just a week earlier, the well-to-do had been lazing by the hotel pool, sipping cocktails and topping up their tans while a Russian dancer entertained. Suddenly the capital had been invaded by men whose tans came from working the farms and the factories, the fighters of the rural poor and the marginalized cities of the Sunnis, led by soldiers who had refused to continue firing on their countrymen.

The Free Syrian Army claimed to have dispatched more than 15,000 fighters to Damascus, joining up with existing rebel units in the capital. A senior Lebanese security source estimated the number between 7,000 and 10,000.

"Everyone knows that the battle of Damascus is the final one," said Abu Omar, clutching a black sniper rifle as he gathered his 15 fighters ready for another clash on the streets of Rukin Adeen, a run-down neighborhood in north-east Damascus, where rebels seized control for 48 hours before tanks and troops stormed in and took it back.

"We will regain this place. We are fighting urban warfare now, so it's not about holding one place. We want Bashar to live in terror that at any moment the Free Syrian Army can reach his palace," said Abu Omar.

Ominously for Assad, GlobalPost saw hundreds of fighters gathering in just one quarter of Rukin Adeen, preparing, they said, for an assault on the president’s office in the wealthy neighborhood of Muhajareen, just across Qassioun's flank.

It's not likely they'll find him working at his desk, said Ayman Abdel Nour, a former Assad advisor who left the regime in 2007 but maintains contacts with many in the upper echelons of power.

Assad is no longer living at home nor working in his office, said Abdel Nour, though diplomats said they did not believe the president had retreated to the Allawite stronghold of Lattakia port, as earlier reported.

"The presidential plane did indeed leave on the day of the blast but not with the president on it," said a Western diplomat still based in Damascus. Assad was seen on state TV swearing in his new defense minister, but not in the usual bright room of the palace reserved for such occasions, triggering speculation the ceremony had been moved underground.

Wherever the president may be, he can hardly have escaped the fact that his capital is no longer fully under his control.

In Midan, a religiously conservative neighborhood home to many of the original Sunni Damascene trading families who once flourished in this city on the spice route, the weekly Friday protests had suddenly transformed into gunfights between rebels and the Republican Guard, the praetorian troops assigned to protect the capital and commanded by Maher al-Assad.

"We are not armed gangs or terrorists, we are the people's fighters. If we did not have the support of the local people we could not fight here," said Abu Yaman, a 40-year-old rebel fighter from Midan. "Time is on our side: the regime lost many of its security officers in the bomb, while we are gaining fighters every day."

After concentrating its tanks, troops and artillery on Midan the regime wrested back control late Friday, announcing on state TV that the "terrorist mercenaries" had been "cleansed" from the area. But local journalists taken to the scene to witness the "victory" had to travel in an armored vehicle and the secret police hadn't yet had time to paint over the graffiti: "Protect the revolutionary Midan! We will not kneel!"

The cars and homes, earlier on fire, had burned out by the time the press junket arrived, but several bodies left in the streets attested to the bitter conflict just passed.

More from GlobalPost: The Damascus bombing

If Midan had given state TV a temporary news reprieve from the military propaganda playing on loop – a look increasingly akin to the television station of Hezbollah, the Assad regime's armed allies in Lebanon – the station's editors were certainly not ordering cameras down to the streets around the Carlton Hotel.

On Thursday night rebels attacked the government offices opposite the Carlton, also home to the Foreign Affairs Ministry, in the very heart of the city. From the Mezze 86 military housing compound on the edge of Damascus, troops in armored vehicles and members of the Allawite militia stormed into the area to secure the symbolically critical building. When a GlobalPost reporter visited the site on Friday, heavy clashes between rebels and Assad's troops had resumed.

Not all the regime's forces, though, were concentrating on defending the dictator.

In Qaboun, site of the city's largest anti-regime protests in the early months of the uprising and defiant under a security lockdown ever since, helicopter gunships and tanks fired into civilian homes, cut off from electricity since early in the week. Just as in Idlib, Daraa, Homs and Hama, the security forces unleashed on citizens looted all they could.

"The Assad army attacked homes and took everything. They are more interested in stealing gold and money than in fighting the Free Syrian Army," said Abu Mohammed, 50, whose family was one of only dozens who stayed in their homes under the onslaught. "We don't have anywhere else to go," he said.

Khaled, a shopkeeper in the high society neighborhood of Mezze West Villas, faced a similar predicament. As hundreds of fighters moved into the farmland just behind the luxury homes and embassies of Mezze, including the colorful-tiled embassy of Iran, Khaled was left without customers.

"The rich people drove off in their SUVs to spend calmer times in Lebanon or Jordan," he said. "They can stay in five-star hotels or rent the best villas. But I have only one house and if I leave it my family will sleep on the street. The rich people have money, but not a homeland."

At the Masnaa border crossing in the mountains of no-man's-land between Syria and Lebanon, officials wore out their keyboards as up to 30,000 Syrians streamed into Lebanon in just 48 hours. A wealthy lawyer who brought his family into Beirut on Thursday night said he had been told to evacuate by a security official who warned him the military might need to shell Mezze. The shock among these elite Damascenes, previously sheltered from the horrors of the conflict, was palpable.

"How can a dying man take his revenge? The regime is weak and confused, it is shelling neighborhoods randomly to try and turn the people against us, but it won’t be able to," said Haj Ibrahim, one of the leaders of the Freemen of Damascus, a brigade of the FSA fighting in the capital.

"The world will soon be surprised by our preparations and the number of generals who defect. Damascus will fall: even as we speak, more fighters and weapons are coming into the city, into the regime's den."

A GlobalPost reporter contributed to this report from Damascus, Syria. Hugh Macleod is in Beirut, Lebanon.