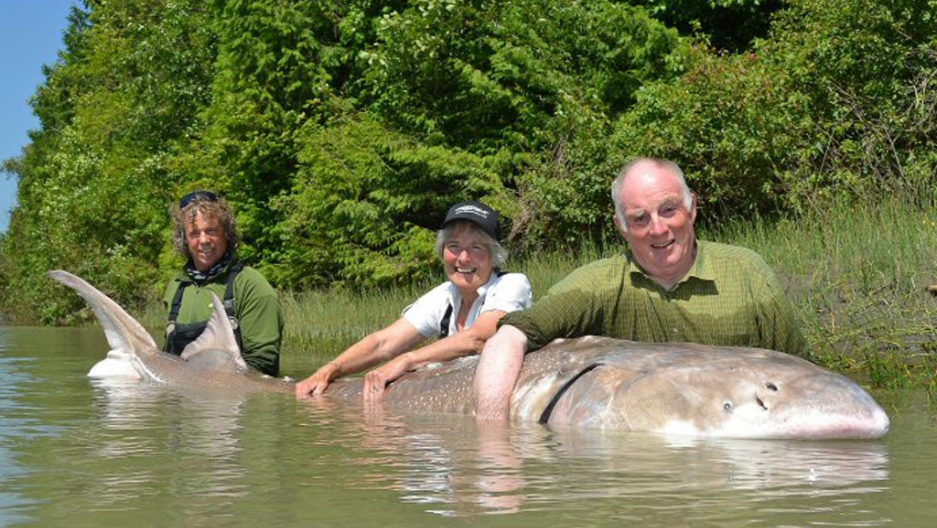 KELOWNA, BC — When Michael Snell caught his first sturgeon three years ago, he was hooked. Excuse the pun.

The 65-year-old retired Englishman vowed a return to Chilliwack, British Columbia, for another fishing trip on the Fraser River.

Little did he know the excursion would result in what an expert called one of the largest catches ever recorded in North America – a 12-foot long white sturgeon weighing 1,100 pounds.

“It is the most excitement I’ve ever had with a fish,” said Snell, whose wife Margaret helped him reel in the monster. “It all happened so quickly. When we picked her head up out of the water, it was almost three feet wide. I never knew a fish could be that large.”

The retired couple from Salisbury first flew to Canada and fished on the Fraser River for two days in 2009. They caught a five-foot sturgeon and promised a return.

They played the fish down the river where their guide maneuvered the sturgeon and the boat to shore.

A fish of this size and great strength is nearly impossible to land. A sport angler has less than a two per cent chance of everything going right like it did.

“I’ve been a professional fishing guide on the Fraser for 25 years and I’ve never seen a sturgeon this big,” guide Dean Werk said.

Once on shore, Werk was able to examine the fish. After scanning the head and dorsal fin, he realized it was an untagged white sturgeon.

Together, the group measured it and applied a tag to the left side below the fish’s head. When the fish came up next to the boat, it measured 12 feet, 4 inches, and weighed an estimated 1,100 pounds. It had a 53-inch girth measured below the pectoral fins.

The Guinness Book of World Records doesn’t have an entry for white sturgeon online; however, Fishing World Records says an angler in San Pablo Bay near San Francisco caught a 2,000-pound white sturgeon, although there is no verification of the catch.

Werk said his company has helped tag more than 47,000 white sturgeon since 1995, and scanned more than 90,000 tagged sturgeon that have been caught and released. British Columbia sturgeon are endangered, and must be released.

“This tells us this dinosaur fish hasn’t been caught in at least 18 years if ever at all. I’d bet she’s over 100 years old,” Werk said.

What comes after the catch of a lifetime? Michael and Margaret Snell still had two more hours of fishing to do. They managed to land two more fish, one over six feet, by the end day.