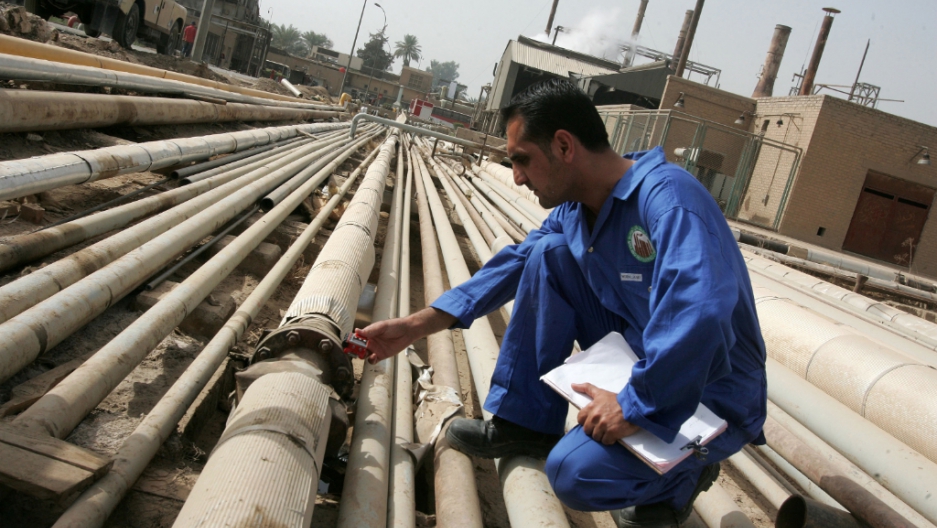 An Iraqi worker examines gas emissions from an oil pipe at a refinery in Baghdad.
Credit: Muhannad Fala'ah
Share

Iraqi Prime Minister Nouri al-Maliki claimed late Thursday to have received a message from US President Barack Obama indicating that the US sided with Baghdad in its deepening row with Kurdistan over the management of the northern region's oil resources, reported Reuters.

The message from Baghdad -- which did not quote the alleged Obama letter directly or provide any copy of it -- welcomed the "positive" US position on the matter, which it said was "in the same manner as the Iraqi government is seeking," said Reuters.

News of the reported exchange came as Chevron on Thursday went public on a landmark oil deal with Iraq's resource-rich Kurdish region, reported The Chicago Tribune, calling the deal with America's second-biggest oil company a "coup for the Kurdistan Regional Government."

Maliki's office responded by saying Baghdad "will not allow the company to implement these contracts," said Reuters.

Iraq has been at odds with its semi-autonomous Kurdish region over the oil issue for quite some time now, and was incensed by the contracts secured there by another major US company, Exxon Mobil, last fall.

Baghdad wants total control over Kurdistan's oil ventures, while Kurds argue that the constitution allows them to act unilaterally when it comes to the region's resources. Various political efforts to resolve the crisis have failed, partly because the issue serves as a proxy for a larger dispute over Kurdish calls for autonomy.

Chevron thinks Kurdistan holds "considerable promise" despite its political complications, said Reuters, while ABC observed "there is considerable incentive to work directly with the Kurds -- unlike the flat fee the central government pays for each barrel of oil extracted, the Kurds offer lucrative contracts allowing developers to claim a share in reserves and the oil produced."

The country's ambitious plans to develop its vast oil reserves -- the fourth-largest in the world -- may be hindered by poor infrastructure and political problems like the Kurdistan issue.