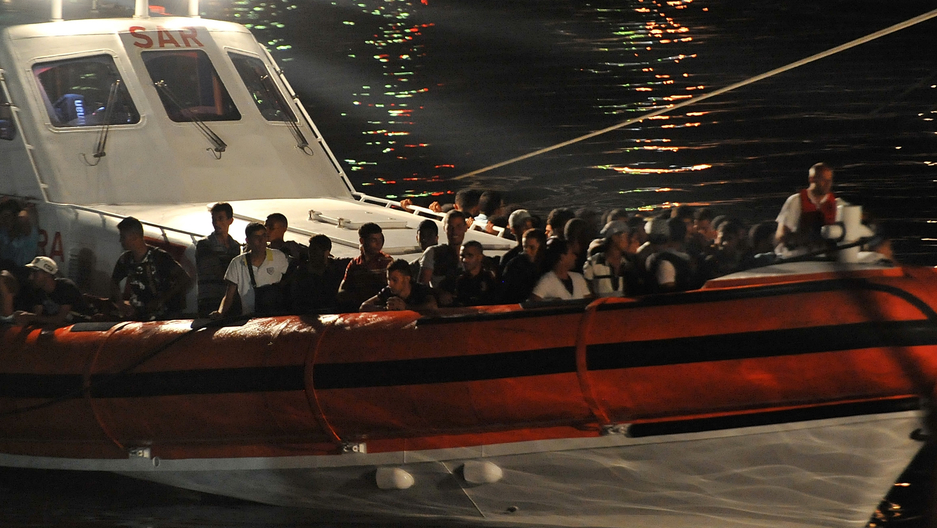 But it’s no holiday further out at sea, where migrants float crammed together in rickety boats or cling to sinking rafts, some choking on their final breaths as they and their dreams of finding a better life in Europe perish under the sparkling water.

This year, the Mediterranean is again the scene of vastly disparate stories of tourism and tragedy because the same warm waters that attract millions of vacationers also serve as perilous transit routes for refugees and economic migrants from Africa.

This year’s death toll has already reached 170. Calls for the European Union to take action to prevent further loss of life grew louder earlier this month after 54 souls, mainly Eritreans fleeing oppressive conditions at home, died when their inflatable boat sank off the Italian coast. Only one man survived to tell their harrowing tale.

But the EU’s critics say that worse than doing nothing, it is contributing to the death toll. Already taken to task for virtually condemning refugees to die at sea by discouraging their rescue, the EU is stoking new anger with its latest proposed solution: drones.

A new plan would use unmanned aerial vehicles as part of a $410 million package of surveillance measures to beef up security at Europe’s borders. The EU says it will improve chances of rescuing migrants and protecting the thousands who risk their lives in the Mediterranean.

But the proposals, known as the EUROSUR project, have raised deep suspicion among human rights and migrant-support groups that see them as an expensive tool of hard-line right-wing politicians that will undermine safety for thousands of people.

It would enable border agencies in different countries to share intelligence data among themselves and so-called third countries such as the North African states from which many are fleeing. It will also authorize the deployment of drones to scan EU territory and international waters.

European Commission officials say the drones will drastically reduce deaths at sea, although they have not specified how.

"EUROSUR will help detect and fight criminal networks' activities and be a crucial tool for saving migrants who put their lives at risk trying to reach EU shores," said Cecilia Malmström, the EU’s commissioner for home affairs.

But EUROSUR’s opponents claim the drones and other new measures will be used to criminalize migrants before they reach EU territory. They say that would not only breach international laws on the right to asylum, but also risk more deaths at sea.

“Drones are very expensive and they don’t help,” said Ska Keller, a German member of the European Parliament. “Even if a drone detects a vessel, it can’t do anything for them. You need to have actual people there, and having a drone doesn’t guarantee that.”

More from GlobalPost: China or Russia: Who's the bigger problem?

Keller, a migration spokesperson for the Green alliance of EU politicians, says the reasons given for the use of drones resemble those for why European coastguards and NATO vessels ignored a stricken boat on which 63 African migrants died last year.

A nine-month investigation by the Council of Europe — a human rights watchdog that oversees the European Court of Human Rights — said the boat was left to drift for two weeks after distress calls were logged and its position tracked. The probe blamed institutional and human failure.

Tineke Strik, who oversaw the investigation, called the incident “a dark day for Europe.” Her report cited a climate of fear that discourages ships from picking up migrants by threatening prosecution for helping them enter European territory.

Keller says EUROSUR is a product of the same attitudes. She says increasingly vocal right-wing groups want to prevent migrants from becoming a European responsibility by returning them to their point of origin before they reach European borders.

She says that would not only deny genuine asylum seekers the chance to escape persecution, but would return them into the hands of their oppressors. EUROSUR’s plan to share migrants’ personal data with third countries could also put those migrants in danger, Keller adds.

A report by the civil rights watchdog Statewatch also criticized EURSUR’s surveillance measures as counter to EU migration policy. It said a plan to create “buffer zones” to keep migrants away from European waters was “incompatible” with the EU’s position on human rights.

“We harbor strong reservations about the current trajectory of EU border control-policy and the role that increased surveillance plays in this context,” it said. The group asked why EUROSUR has yet to be fully debated in the European parliament.

EUROSUR opponents also question claims it is needed as a response to last year’s Arab Spring because the uprisings in North Africa threaten to inundate Europe with more refugees than its economies can handle.

Only 5 percent of Arab Spring refugees have ended up in Europe, but have created problems for the authorities because they have been concentrated in a very few places, mainly Greece’s Evros region, Malta and the Italian island of Lampedusa, just 180 miles from Libya.

Critics say EUROSUR represents a misallocation of funds at a time when the continent needs to save cash. Running costs are expected to raise EUROSUR’s overall cost to billions of euros.

“It’s horrendously expensive and the benefits aren’t clear,” says Keller, who believes the money should be spent on search and rescue teams. “We should save money in an economic crisis, not spend it on something with no clear benefit apart from to the defense industry.”

Set to become fully operational in 2013, EUROSUR is still awaiting final approval by the European Parliament and Council. So arguments for and against will continue long after the tourists depart the Mediterranean shore this fall.

For the migrants who continue risking their lives in precarious boats, however, the only certainty is of rough seas ahead.