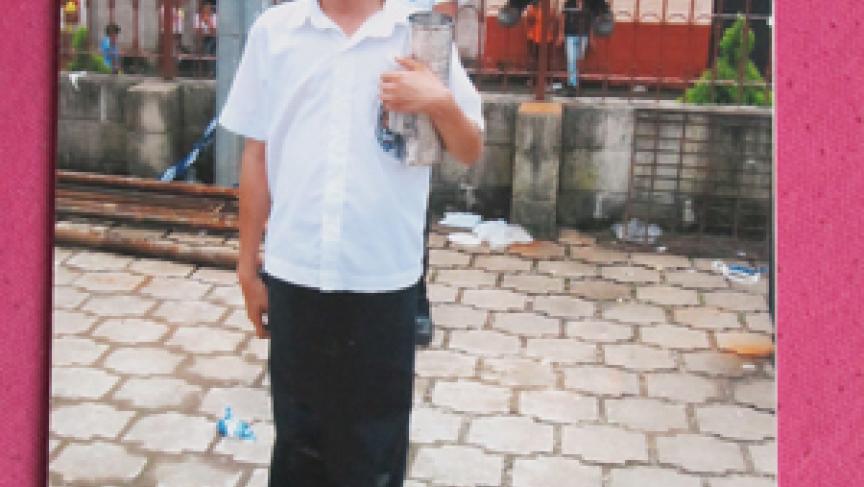 This photograph is one of many Betty Espinoza keeps of her missing son Franklin, who was 13 years old at the time he went missing. (Photo: Ambar Espinoza)

Share
El Salvador has the world's second highest murder rate — more than 4,300 murders last year alone. That's just behind Honduras, its neighbor in Central America. The United States has poured hundreds of millions into anti-gang efforts in Central America but nothing much seemed to change until just a few months ago, when the Catholic Church stepped in to broker a truce between the two gangs in El Salvador. But the culture of violence there remains. Last December I met Betty Espinoza – a relative of my mother's. She told me the story of what happened to her son, Franklin. She said one of the country's most violent gangs kidnapped the boy more than a year ago – and she hasn't seen him since. "Earlier this year, I felt this strong premonition, I felt a strong grief, and I just cried and cried. I wondered if they were doing something terrible to my son," she said. Espinoza and I drove to the place where she believes her son was kidnapped, up a mountain in Eastern El Salvador. Thirteen-year-old Franklin was working at a coffee plantation not far from this desolate road. Espinoza said witnesses told her that two men abducted him. She believes Franklin was kidnapped because he found a cell phone that belonged to a member of the Pandilla 18 gang, and the gang member was furious. "He told someone from a neighboring town, 'that boy is going to shed tears of blood,' " Espinoza said. The police launched a search, but didn't find the boy. But Espinoza said people have seen her son in a small village not far from here. "People say the gangs have already tattooed him. Everyone who's kidnapped into gangs is tattooed," she said. "I've heard my son runs drugs for the gangs, begs for money, or leaves extortion notes." This kind of story is common in El Salvador where, every year thousands of children are kidnapped and recruited into gangs. But recently the Catholic Church intervened. In March, the church brokered a truce between two of the country's most violent gangs, and the results have been dramatic – homicide rates dropped by 50 percent. Good news, said El Salvador's President Mauricio Funes at a news conference, but he said it's only a first step. "As a government, we are convinced that this truce between gang leaders does not solve the problem of delinquency in our country," Funes said. "But it does open an opportunity to attack the problem." The problem has to be battled on many fronts, says James Rose, the regional gang adviser at the US State Department in San Salvador. "It's an economic problem, it's an educational problem, it's a law enforcement problem, it's a public safety problem," Rose said. It's also a problem that crosses borders, he said. "For example, we know that there are gang members here that are directing extortion against Salvadorans in our communities in the US," he said. "Because it's becoming more and more transnational, it requires a transnational response." The international community is responding. The gangs spread criminal behavior and insecurity across borders, according to the United Nations, so the UN is providing counter-terrorism funding for police and judicial reform, border security, and economic development. The United States is behind a multi-million dollar pilot project to teach police in Central America how to do things like extract information from the cell phone SIM cards belonging to gang members. US officials say that project reduced murders by 40 percent in Lourdes Colon, one of the most violent communities in the country. In March, US Under Secretary of State Maria Otero visited Lourdes Colon and praised the program. "It is really an effort to understand how you gather intelligence, it is an effort to understand how it is that gang members are linking to others to extort, to carry out different crimes, to even kill each other," she said. But better police work, border security, economic development — even the truce between the gangs — it's not enough for the mother of Franklin Espinoza. "I'd like to find him dead or alive to know what's happening, to be sure of what's become of him," she said. "To this day, I don't know what they've done to him." Espinoza said she's given up hope of ever seeing her son alive again.