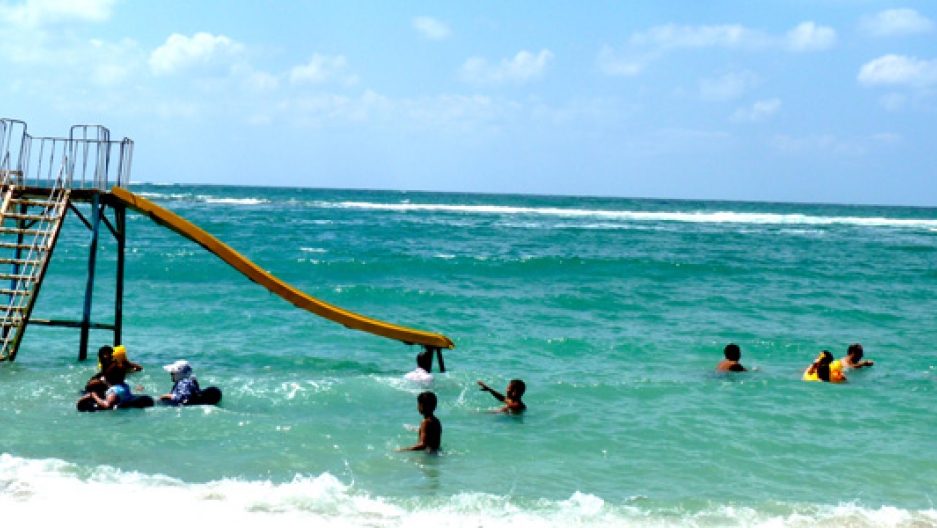 The week before Ramadan, the beaches in Alexandria are packed with Egyptian tourists. During the month-long fast, beaches are almost empty in the daytime. (Photo: Magdy Samaan)

Share
For generations, Egyptians have flocked to the coastal city of Alexandria to hit the beach. And it's especially crowded during the week before Ramadan, the Islamic holy month when Muslims abstain from food, drink, and tobacco during daylight hours. Today, on the first day of Ramadan, the beaches in Alexandria are comparatively empty, though some families make a point of heading to the beach at this particular time. Ramadan is when many Christians, who make up about 10 percent of Egypt's population, get the beaches almost entirely to themselves during daylight hours. A man sitting with family and friends, smoking a traditional Arabic-style water pipe, gave his name as Michael the Christian. He has a tattoo of Saint George on his shoulder. "It's a good day to bring our families to the beach," Michael told me. "It's mostly empty." "It's not that we don't get along with our Muslim brothers," he was quick to add. "We're all Egyptians." Another beachgoer named Rami scanned the scene today and said, "everybody here is Christian." He came to Alexandria from Cairo — about three-hours drive away — with his wife, his father, and his two-year old son. Rami said going to the beach at the start of Ramadan has been a tradition in their family for years. It has become something like a moment of freedom for a religious minority in Egypt, especially one that feels increasingly under pressure. Rami said the Islamic holy month can bring some difficulties for Christians here. "We don't fast," he said, "but it's hard to find food sometimes." He was referrring to the fact that many restaurants and markets are closed during daylight hours. Egypt is becoming more religious and conservative, Rami said. Fifteen years ago, he pointed out, "women at the beaches in Alexandria were wearing bathing suits." Now, all the women here swim in clothes that cover their arms and legs, even Christian women. Sitting a few umbrellas down the beach from Rami, wearing a polo shirt and capri pants, was Salwa Fouad Aziz. She said some of the changes in Egyptian society are unfortunate. She has been coming to the beach here in Alexandria — especially during Ramadan — her whole life. "People have changed," she said. "People used to wear whatever they want and say whatever they want." "Now, there isn't the same freedom anymore." And that goes especially for Christians, she said. Aziz brought up her two sons, who are in their late 20s. She said it's been hard for them to find work in Egypt, so one of them moved to the US five months ago. Her other son is planning to follow suit. Sometimes, Aziz said she thinks about leaving, too. "I love Egypt", she said. "No matter what happens here, I love it. I will go to visit my sons abroad. But I won't just leave."