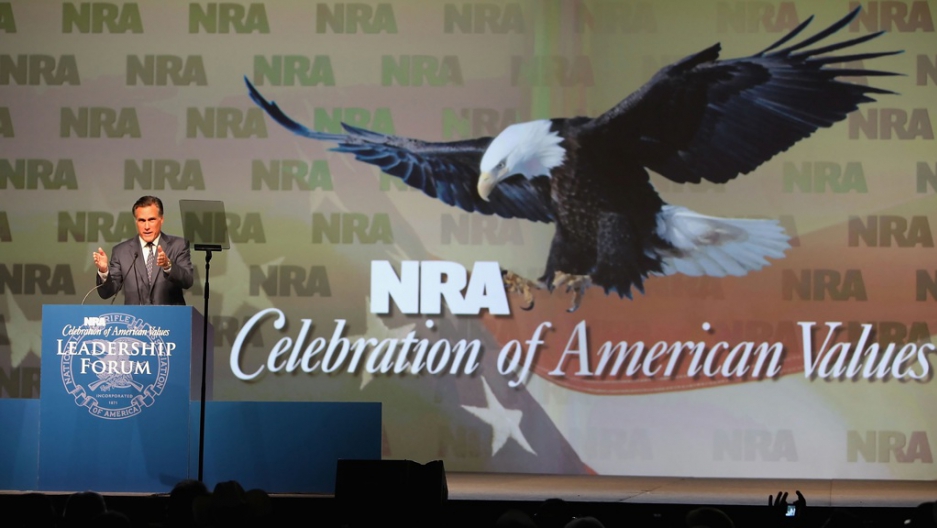 BOSTON – The tragic shooting in Colorado last night at a premiere of the Batman movie "The Dark Night Rises" will almost certainly thrust gun control front and center in the 2012 presidential campaign.

So where does Republican challenger Mitt Romney stand?

Well, it depends on which Mitt Romney you ask: The one who needed to appeal to liberal voters in Massachusetts when running for senator and governor, or the one who needs to win Virginia and Appalacian swing states in 2012.

The fact-checking site Politifact has a thorough analysis.

As governor, Romney signed what was reportedly the nation's first permanent ban on assault weapons. "These guns are not made for recreation or self-defense. They are instruments of destruction with the sole purpose of hunting down and killing people," he told the Boston Globe, according to Politifact.

But Romney's opposition to letting citizens own automatic weapons shifted as Romney began eying the White House. By 2007, prior to his failed campaign for the 2008 Republican nomination, he had joined the pro-gun National Rifle Association.

In April 2012 in a keynote speach to the NRA's National Convention in St. Louis, Romney equated the NRA's agenda with freedom. "All of you can be proud of your long and unwavering defense of our constitutional rights and liberties," he said.

Romney laid out his gun ownership position to the 2012 NRA audience as follows: "We need a president who will stand up for the rights of hunters, sportsmen, and those seeking to protect their homes and their families. President Obama has not; I will. And if we are going to safeguard our Second Amendment, it is time to elect a president who will defend the rights President Obama ignores or minimizes. I will."

He is even more succinct on his campaign website, stating that America's current gun laws are restrictive enough. Here are some key statements:

Like the majority of Americans, Mitt does not believe that the United States needs additional laws that restrict the Second Amendment right to keep and bear arms.

Mitt will enforce the laws already on the books and punish, to the fullest extent of the law, criminals who misuse firearms to commit crimes. But he does not support adding more laws and regulations that do nothing more than burden law-abiding citizens while being ignored by criminals.

Mitt was proud to support legislation that expanded the rights of gun owners. He worked hard to advance the ability of law-abiding citizens to purchase and own firearms, while opposing liberal desires to create bureaucracy intended to burden gun owners and sportsmen. As governor, he also designated May 7th as “The Right to Bear Arms Day” in Massachusetts to honor law-abiding citizens and their right to “use firearms in defense of their families, persons, and property for all lawful purposes, including common defense.”

Nowhere does the "gun rights" page on MittRomney.com mention the assault rifle ban, nor his more restrictive, previous stance on the matter.

Politifacts concludes that Romney attempts to straddle both the pro- and ant-gun control camps. In their words:

During his campaigns for statewide Massachusetts office, Romney openly spoke of his support for -- to use his words from 2002 -- "tough gun laws." As recently as the 2008 Republican primary, Romney said "I don't line up 100 percent with the NRA." But since then, his pro-gun rhetoric has become sharper and virtually all nuance was erased. He even touted the bill he signed in Massachusetts by scrubbing any reference to the provisions banning assault weapons.

Still, while Romney’s rhetoric has moved distinctly in the NRA’s direction, it’s not clear that his policy positions have changed. This is partly because Romney, even in the 1994 campaign didn’t take a full-blown, pro-gun-control stand. And even now, as his rhetoric has become more pro-gun, Romney has never gone so far as to specifically renounce his prior positions, such as his signing of the 2004 Massachusetts law, which at the time was billed as a compromise measure. So Romney’s shift has been more on the rhetorical level than substantive.

Has Romney flip-flopped on the matter? According to Politifact, "He earns the rating of Half Flip."

Here is Romney's response to the shooting: