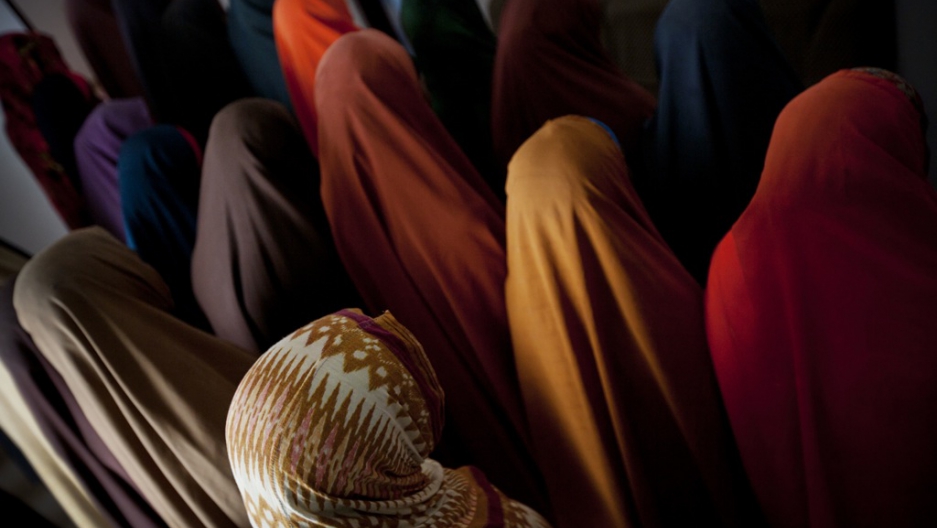 A group of women, all of whom survived some form of sexual or violent attack pose for a photograph at a shelter for women in Mogadishu.
Credit: Kate Holt/UNICEF
Share

MOGADISHU, Somalia — When a drought became famine here last year, hundreds of thousands of people bundled together what few belongings they had and began to walk, either across the border or toward Mogadishu, searching for food.

Makeshift camps multiplied and spread throughout the capital, until it seemed the tangles of dome-shaped stick and rag huts occupied every empty patch of land in the city.

The good news it that although hunger remains, the famine has abated. The bad news is that for the women and girls still living in the refugee camps, another horror has taken hold: rape.

More from GlobalPost: Peace, but little else in rural Somalia

In a series of interviews conducted in the camps, in a safe house and in another secret location, women and girls described to GlobalPost a life of constant fear and brutal sexual violence, where pre-pubescent girls, teenagers and older women are all fair game to gangs of armed men who act with impunity.

A bone-thin 37-year old mother described the night a gang of gunmen entered her hut looking for her teenaged daughter, who they had seen collecting water and firewood.

“They didn’t come for me, it was my daughter they wanted,” she said.

The mother fought the men off as her daughter, who is 17, fled into the night. One of men managed a blow to her head, knocking out several teeth.

After the attackers realized their intended victim had escaped, they sprayed the hut with bullets. The mother’s other daughter, 12, was killed instantly. The men then raped the mother on the dirt floor of the hut. When they were finished, they stabbed her in the ribs and left her to die.

After the attack, the woman’s terrified neighbors emerged from their own shacks, just inches away, to help. They took her to a hospital and from there she came to Mogadishu’s only safe house for survivors of sexual violence, established by the Elman Peace and Human Rights Center, a Somali-run organization.

Sitting cross-legged on a grass mat at another one of the camps, which are an increasingly permanent feature of Mogadishu’s fractured urban landscape, a mother said she feared for her eldest daughter, who is 9-years old.

“I hide her at night to keep her safe. Even if you are not attacked that night you worry: when will they come? Sometimes I don’t sleep,” she said. “I tell her not to wear pretty clothes so that she won’t be noticed by the gangs.”

More from GlobalPost: Sudan: Will riots bring down Omar al-Bashir?

UNICEF is one of a handful of organizations working to support the city’s rape survivors.

“In Somalia sexual violence against women and girls is one of the worst and most prevalent consequences of the ongoing conflict,” said Sheema Sen Gupta, head of UNICEF’s child protection program in Somalia

Half of the cases so far referred to UNICEF this year have been victims of sexual violence. The majority of those attacks have occurred in the city’s famine camps. Fatherless families endure the worst of the violence and abuse.

At the height of the famine, mothers and children often trekked alone to the capital. Their husbands and fathers either stayed behind to look after the family’s property or were already gone, killed or missing after years of civil war.

More than two decades of conflict have broken Somalia’s state institutions. There is little in the way of law and order, let alone justice. The war has also nurtured a generation of men who know nothing but fighting, and a culture where a gun gives its bearer the right to take whatever he wants.

Making matters worse, the stigma attached to rape and sexual violence remains powerful. Few Somalis are willing to speak. And those that dare are too afraid to be identified.

“There are a lot of terrible issues inside the camps but no one can talk about it. If we do there will be trouble,” said a 24-year-old mother of four who was abandoned by her husband. “There’s a lot of violence, a lot of rape. But most people hide. The government doesn’t do anything to protect people.”

“We are at risk every single minute of every single day,” said another mother of three daughters, all under 12-years old.