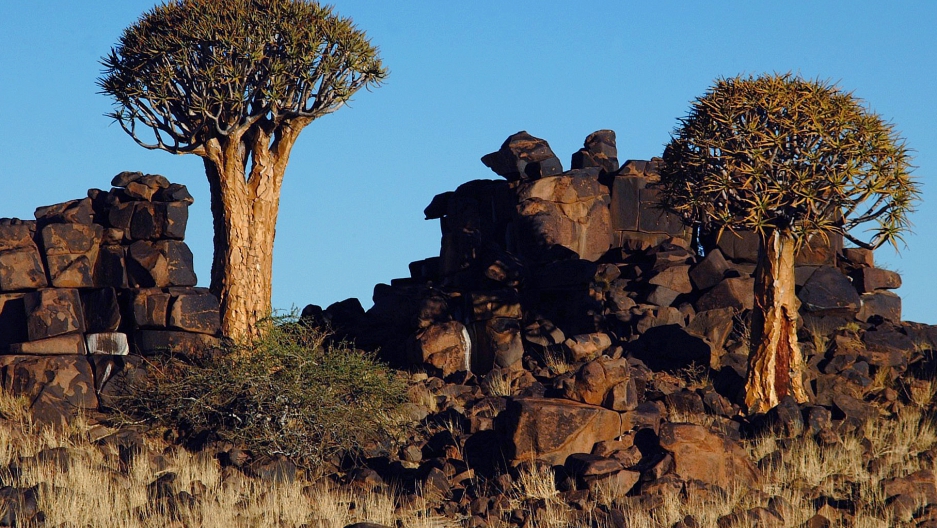 A picture taken on June 2009 in the province of Karas southeast of Windhoek, showing Quiver trees (Aloe dichotoma), which grow in arid regions of Namibia and South Africa.
Credit: BRIGITTE WEIDLICH
Share

Scientists have found a massive underground water source in Namibia, one of Africa's driest countries in Africa, which could supply the country for 400 years.

The fresh-water aquifer was found 300 meters below the arid sub-Saharan landscape, flowing under the boundary between Angola and Namibia, the BBC reported, and containing roughly 5 billion cubic meters of water.

On the Namibian side of the border the aquifer covers an area of about 43 miles by 25 miles, or 1,075 square miles, according to the International Business Times.

"The amount of stored water would equal the current supply of this area in northern Namibia for 400 years, which has about 40 percent of the nation's population," Martin Quinger from the German federal institute for geoscience and natural resources, which has been helping the Namibia government in its search for sustainable water supplies, told the BBC.

The aquifer has been named the Ohangwena II, and its initial discovery was reported by Namibian papers last week.

According to the Smithsonian Magazine, an aquifer consists of a rocky or gravel layer in the Earth’s surface where water can collect in the holes between rocks.

It cited the Namibian paper Allgemeine Zeitung as reporting that the aquifer was slowly replenished from water entering the soil in the Angolan mountains to the north.

The Namibian find is great news for a drought-prone country whose Prime Minister just approved a $4 million in drought-relief aid to the Kunene Region.

According to the International Business Times wrote, Namibia has more land than France but fewer people than Chicago, 50 percent of whom live below the poverty line despite the country being the fourth-largest producer of uranium.

Meanwhile, Quinger warned that the fresh groundwater of Ohangwena II had a smaller aquifer of salt water sitting right on top of it, and urged caution in any attempt to extracting the water.

"If people don't comply with our technical recommendations, they might create a hydraulic shortcut between the two aquifers, which might lead to the salty water from the upper one contaminating the deep one or vice versa," Quinger said.