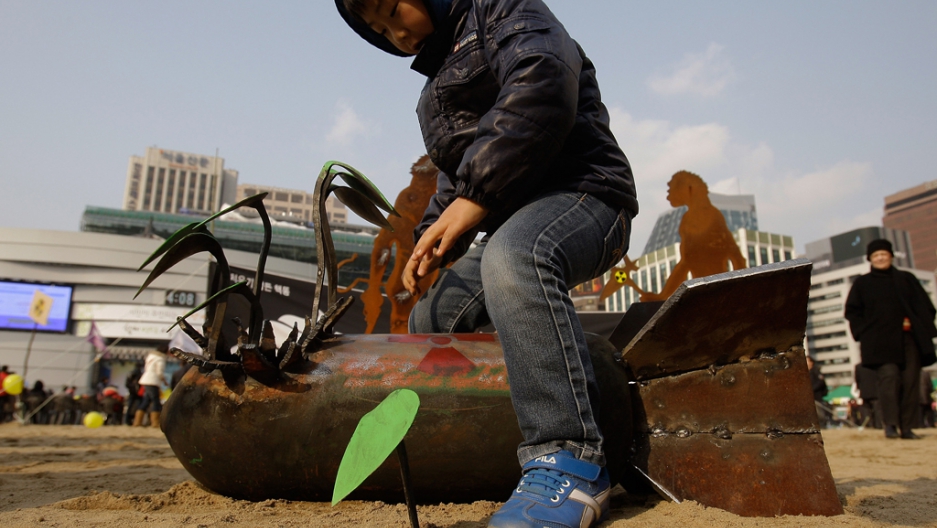 A South Korean boy plays with nuclear bomb is exhibits during a rally held to commemorate the Fukushima nuclear disaster on the eve of the one year anniversary of Japan's earthquake and tsunami on March 10, 2012 in Seoul, South Korea.
Credit: Chung Sung-Jun
Share

According to the Telegraph, the answer could be yes: the UK paper reported that 36 percent of Fukushima Prefecture children have abnormal growths on their thyroid.

The sixth report of the Fukushima Prefecture Health Management Survey, which was released in April, first revealed the disturbing figures to world audiences, after the survey examined 38,114 local children.

Authorities who administered the test advised caution about the results to Telegraph reporters:

"Yes, 35.8 percent of children in the study have lumps or cysts, but this is not the same as cancer," Naomi Takagi, associate professor at Fukushima University Medical school, told the Telegraph.

More from GlobalPost: Japan to give radiation meters to children living near Fukushima plant

It's well-known that radiation releases can have a particularly adverse effect on the human thyroid.

The ATA reports adds that thyroid cancer "seems to be the only cancer whose incidence rises after a radioactive iodine release."

The ATA also reports that babies and children at highest risk.