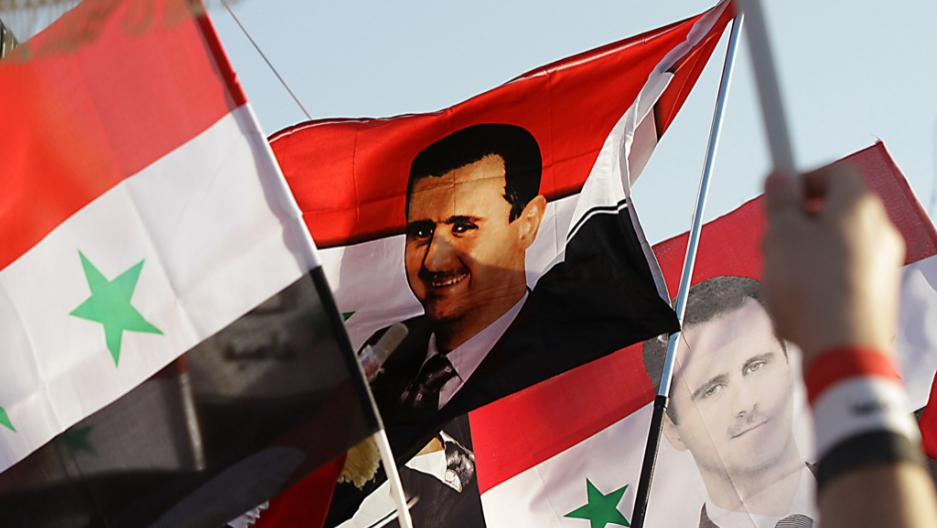 A depiction of Syrian President Bashar al-Assad on the country's national flag. A bomb struck at the heart of Syria's senior command in Damascus Wednesday, killing at least three of Assad's top brass in an attack claimed by rebels who warned of more carnage to come.
Credit: LOUAI BESHARA
Share

BEIRUT, Lebanon – In the hours after the biggest security breach in the history of the Assad family’s four-decade dictatorship, the Syrian regime took to the airwaves in a desperate quest to reassure supporters.

“You have to have full confidence, beyond any doubt, that the morale of your military is higher than ever before, and the morale of our people is the highest ever,” said Information Minister Omran Zuabi on Syria TV.

The morale-boosting measure in question?

A bomb that had exploded inside the National Security building during a meeting of the police state’s top security chiefs. The explosion killed the defense minister and the head of Assad’s crisis management group. It badly injured the interior minister and national security chief – whose status remains unknown. Critically, it also killed President Bashar al-Assad’s powerful brother-in-law, Assef Shawkat, the long-time military intelligence chief, often referred to as “Syria’s second president.”

Almost immediately, Assad appointed a new defense minister, General Fahd Jassem al-Freij — the military chief of staff whom Human Rights Watch namedas one of 74 officials who should be investigated for crimes against humanity over the crackdown on protesters. On TV, the general vowed that the military would “cut off every hand that harms the security of the homeland and citizens.”

But among regime insiders and supporters, the officials’ confident proclamations rang increasingly hollow.

“Many things have changed now. Bashar has lost the support of the Baath Party,” said a senior member of the party. Bashar’s father, Hafez Al-Assad seized power for Baath in a 1963 coup, and the party held a constitutionally mandated majority in parliament until this year.

More from GlobalPost: Complete Coverage of the Damascus Bombings

In a rare candid interview, on condition of anonymity, the Baath official said the movement — established under the banner of socialism and rights for the rural poor — had been transformed under Hafez al-Assad into “a security organization and a militia to defend a family.”

Under Bashar, he said, the party had lost touch with its roots in regional communities, leading to its failure to address early protests that broke out in [[Sunni-dominated]] Daraa, in southern Syria.

“When the unrest began in Daraa, Bashar was shocked and gathered all the senior security officials from Daraa and asked them why Daraa was against him. No one could answer him because all those officials belong to Daraa in name only. They live in Damascus and don’t know anything about the situation on the ground. No one could say, ‘Your cousins are dealing with the people of Daraa as slaves.’”

More from GlobalPost: Syria: How it all began

The Baath official alleged that protests in Daraa are now being organized by members of the ruling party itself.

In further evidence of the Sunni-Allawite tension, Syria’s Vice President Farouk al-Sharaa, the most senior Sunni civilian official, has been under virtual house arrest for much of the past month, according to a cousin.

“Some relatives have tried to pay him social calls recently, but the guards at the house always deny them entry. I can say that since the beginning of July, Farouk has not been in his office,” said the cousin, Mohammed al-Sharaa, interviewed by GlobalPost in Damascus.

Sharaa’s sidelining coincided with discussions by Syria policy makers of a Yemeni-style transition of power, whereby President Assad would be required to hand over to his vice president as happened with Yemen’s former dictator, Ali Abdullah Saleh.

The vice president also came under fire for speaking out on the crackdown in Daraa, his hometown, according to his cousin. “After the massacres in Daraa, Farouk expressed his anger to Bashar on a number of occasions, I’m told, and was warned by Maher al-Assad not to open his mouth again.”

Ayman Abdel Nour, a former advisor to Assad who defected in 2007, said Manaf Tlass, the most senior Sunni general to defect so far, had been similarly appalled by the regime’s onslaught on his hometown of Rastan, between Homs and Hama.

“Manaf tried to mediate on behalf of the people of Rastan but this was not appreciated by Bashar, and Manaf had been confined to his home since the beginning of the year,” said Abdel Nour, who was friend’s with Manaf when both lived in Damascus.

Travelling to Paris, Manaf joined his father, Mustafa Tlass who served as Hafez al-Assad’s defense minister for 30 years. The defection of most senior members of the Tlass family – Abdel Rizk Tlass, Manaf’s cousin, heads the powerful Farouk Brigade of the FSA, which led the fighting against the regime in Homs - signaled that the Sunni elites on which the regime built its credibility are abandoning it.

"I cannot but express my anger and pain at seeing the army pushed to carry out a fight that is against its principles, a fight directed by security forces and in which the people, including the soldiers, are the victims," said Tlass, a general in the elite Republican Guard charged with protecting the regime and a childhood friend of the president.

Syrian military aircraft now drop fliers near the Turkish border warning the ever-increasing numbers of defecting soldiers that “this is the last chance to save yourself. You are helpless in front of the Syrian Arab Army.”

No one knows exactly how many soldiers have now defected from the 300,000-member army, the majority of whom are Sunni conscripts. Observers believe the figure to be in the tens of thousands.

The army is also suffering a recruitment crisis. Many conscripts reportedly fail to turn up for duty. Already mistrustful of Sunni soldiers, the Allawite-dominated security establishment is relying ever more on militias, paid and armed, and comprising not just Allawites, but Sunnis, Christians and Druze.

These “popular committees” or shabiha operate as local neighborhood watch, said a young member known as Basil, who patrols Damascus’ Mezze 86, a military housing area of the capital.

“All loyalist youth want to protect their neighborhood from those strangers who come and protest against President Assad. We got a green light and clear orders from senior security officials to create this group,” said Basil.

Armed in the early weeks of the uprising only with wooden sticks to beat protesters, members of Basil’s group have now been issued AK47s, official cards, pistols and a truck, he said.

“I will be frank and say some members did big mistakes, Allawite members of the group killing Sunni youth, which pushed many people to be against us,” Basil said.

The regime’s “spawning of militias” as one analyst put it, has also driven a wedge between Assad and members of his army, with increasing numbers of officers not only defecting but speaking out against the shabiha, the regime’s loyalist militias.

“There is clear, mutual hatred between the soldiers and shabiha,” an army officer told Reuters in a recent interview. “All those things you see in the media have nothing to do with us – the random killings, stealing … Inside their neighborhoods, the shabiha are in charge.”

More from GlobalPost: Brutally violent militia members tells it like it is

Even among the most loyal Allawites, Assad’s policies are now being seen by some as an existential threat to their sect.

“This civil war will destroy everything and Allawites will pay a big price,” said a former member of a shabiha militia loyal to the Assad family, speaking from a village near Lattakia. “What’s the point of running the country for 40 years if we return to hard times for hundreds of years to come?”

The man, who asked to be known only as Abu Haidar, told a GlobalPost reporter he had refused to re-join the shabiha when friends demanded, saying he would not shoot at Sunni protesters.

Many Allawite residents now dread the militias that dominate their streets as much as they fear retribution from enraged Sunni neighbors.

“We are between a rock and a hard place. After all the killings I am against the Assad regime, but I must live among my community to get protection,” Haidar, a 40-year-old lawyer told a GlobalPost reporter in an Allawite neighborhood of Homs recently. “I think the Allawite have no future in Homs if Assad goes. The Sunnis will not forget what the shabiha did, killing their sons and women.”