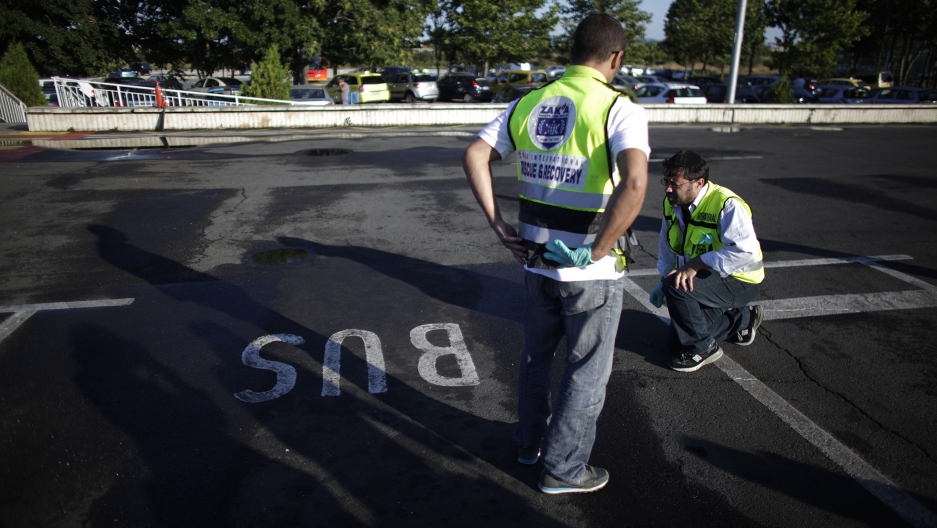 Members of an Israeli Rescue and Recovery team work at the site of the Wednesday bomb blast at the parking lot of Burgas Airport, July 19, 2012. (Photo by Stoyan Nenov/Reuters.)

Israeli officials are blaming Hezbollah and Iran for the deadly suicide bombing of a bus carrying Israeli tourists outside of Burgas Airport in Bulgaria.

Bulgaria is a popular tourist destination for Israelis.

Israeli Prime Minister Benjamin Netanyahu has promised a "firm response" to the suicide bomb that killed seven people, including five Israelis, a Bulgarian driver and the bomber himself, and injured at least 34 more people.

According to The New York Times, Israeli, American and Bulgarian officials were quickly moving to find concrete evidence linking the bomber, who was believed to have falsely presented himself as a Michigan man, with Hezbollah and Iran. On Thursday, Bulgarian officials released a short video clip, showing the man, believed to be in his 30s, walking nervously around the airport terminal, hanging near the group of Israelis.

"It is his oddly bulky, oversized backpack that, in terrible hindsight, stands out the most. This bag, investigators believe, contained the bomb that the man is suspected of detonating next to a bus outside the airport," the Times wrote.

ABC News obtained a copy of the Michigan driver's license he was believed to have used, which listed the name Jacque Felipe Martin. His address, fake, is actually a Baton Rouge, La., casino called the Belle of Baton Rouge, ABC News said.

Iranian officials, responding to Netanyahu's comments, rejected any responsibility for the attack.

"Terrorism endangers the lives of innocents,” an Iranian spokesman said, according to the Times.

According to the BBC, Wednesday's attack comes on the 18th anniversary of an attack against a Jewish community center in Argentina. Israel blamed Iran for that attack as well; Iran rejects any responsibility.