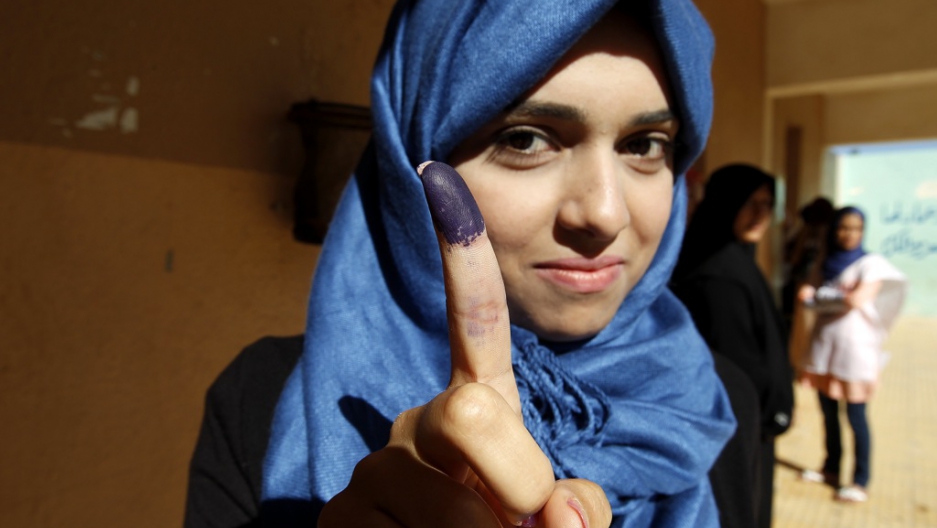 A Libyan woman shows her ink-stained finger after casting her vote to elect Libya's the General National Congress at a polling station in the eastern city of Benghazi on July 7, 2012.
Credit: Mohammed Abed
Share

TRIPOLI, Libya — Defying regional trends, Libyans didn't vote for the Islamists during their first ever free election earlier this month.

But they didn't exactly vote for the secularists either.

The results, which were finally released this week after a 10-day delay, shocked leaders of the Muslim Brotherhood, the Islamist organization that in the last year swept to easy victories in both Egypt and Tunisia.

In Libya, the Brotherhood won just 17 seats in the 200-seat National Assembly, which will be tasked with forming a new government.

The majority of the seats, about 120, were instead won by independents. And the race is now on among all sides to form alliances and a potential majority.

To that end, the attacks have begun against the election’s most successful coalition — the nominally secular National Forces Alliance, which won about 40 seats and is led by Mahmoud Jibril, the former chief of the transitional government.

While Jibril successfully led the country through a tenuous transition, he was not present inside the country during much of the fighting and has connections to both the United States, where he was educated, and the former regime of Muammar Gaddafi.

“Even in the streets of Tripoli there have been protests against these results,” said Ahmed al-Seid, a former rebel leader from Misrata. “I can’t say no one voted for him, but I can say most of Libya does not want him.”

Al-Seid criticized Jibril for his close ties to Gaddafi’s son Saif and for his role as an economic planner under the old regime.

“He is a good speaker and if I didn’t know his background I would probably give him my vote. But we believe he has support from outside — maybe from USA or maybe from Israel — and we are sure the Gaddafi loyalists are with him,” he added.

Such fears that Gaddafi supporters influenced the election increasingly prominent here. Jamal Bennor, the coordinator of justice for the transitional government, said he worried that large numbers of Gaddafi loyalists had participated in the election, especially in former strongholds like Sirte, Bani Walid and towns in southern Libya.

“We spent eight months fighting these cities. Now, to have our democracy, we must deal with them as equals. I tell you, it is not an easy thing,” he said, adding that he questioned Jibril’s true loyalties.

According to the electoral committee, about 67 percent of eligible voters participated in the election. Around 40 percent of those were women.

Ibrahim Abdulaziz Sahad, who is secretary general of the National Front for the Salvation and who won an independent seat, said too much was being made of this first election.

The assembly is tasked with forming a new government, but another round of elections next month will decide who writes the new constitution. And parliamentary elections won’t be held until 2013.

“We have been competing for votes but now we must come together for the higher interest of Libya,” he said. “This coalition will be vibrant. Everybody needs to be onboard for the next challenge of forming a constitutional assembly and the criteria for forming the new government.”

Sahad said it was disturbing how the media treated Jibril as the winner. Jibril himself was not on the ballot, according to rules blocking members of the transitional government from running.

“Mr. Jibril by law could not run in this election. It is the coalition party that led the running,” he said.

But for Sahad, some hiccups in these early stages of democracy were to be expected.

“We are just beginning in the first grade of democracy,” he said.