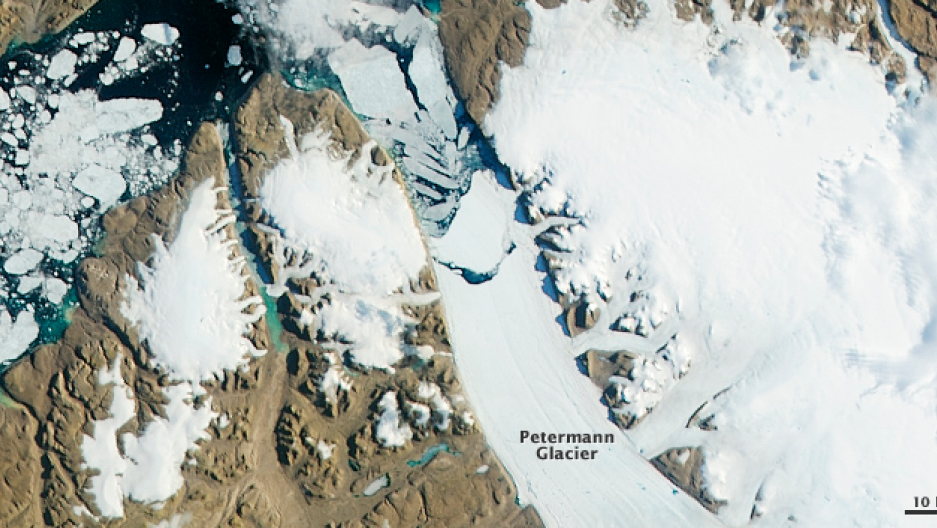 The Petermann Glacier, shown from space shortly after the new iceberg broke off. (Photo courtesy of NASA.)

A sheet of ice, twice the size of Manhattan, broke off a glacier in Greenland this week.

The new iceberg measures 46 square miles. In 2010, the Petermann Glacier shed a chunk of ice measuring 96 square miles. The loss of glacier mass in Greenland, which has seen warming temperatures, has scientists concerned.

Andreas Muenchow, a professor at the School of Marine Science and Policy at the University of Delaware, has been studying the Petermann Glacier for years.

Muenchow said it's hard to attribute any one glacial calving incident to global warming. There's no glacier that truly serves as an indicator of global warming.

"However, what we see all around Greenland are changes to the ice sheet that are rapid over the last 10 or 20 years," he added. "In this sense, the Petermann Glacier is one of many events, indicators, that suggest to me and others that the Greenland ice sheet is changing at a rate that's really fast."

Greenland is losing mass, he said, because much more ice is going out to sea than forms from the snow the island receives. With this particular incident, the Petermann Glacier has now retreated further than it ever has been since the start of the Industrial Revolution.

And while Greenland's temperature is rapidly rising, some 4 degrees in the last 30 years — five times the global rate — it's actually rising water temperatures that put the glaciers at risk.

"Most of the melting of this glacier, still, is taking place by the ocean below," Muenchow said. "The critical point, which suggests how stable this glacier is — will it collapse, will accelerate, will it grow back to its normal size — all of these questions depend on one critical location: where the bedrock of Greenland meets the ice sheet of Greenland, which meets the ocean of Greenland."

That is some 30 miles upstream from where the current break occurred, some 2,000 feet below the surface. The depth makes it hard to get a good evaluation of just how precarious the glacier's current position is.

The Petermann Glacier is already a major source of ice loss in Greenland, some 6 percent of the island's total. This particular iceberg, as large as it is, contains enough fresh water to supply every American with water for cooking, bathing, drinking, some 69 gallons per day per person, for almost six months.

"It slowly breaks apart and as it breaks away it drifts slowly southward along eastern Canada. The first pieces of the 2010 event arrived last summer off the coast of Newfoundland, where they provided a fantastic display," Muenchow said.