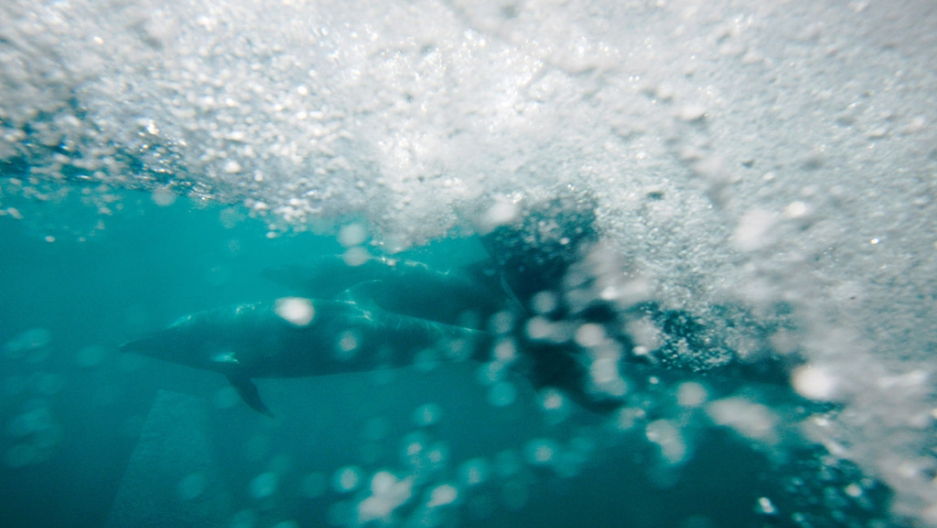 Bottlenose dolphins swim ahead of the bow of a boat off the southern California coast on January 30, 2012 near DRY 30: ana Point, California.
Credit: David McNew
Share

Math-challenged, beware: dolphins may be better at complex nonlinear mathematics than you are, reported Discovery News.

We've always known that dolphins are unnervingly intelligent. Now, a study has revealed that dolphins may be using complex mathematics when using their built-in sonar to hunt for food.

A paper published in the Royal Society of A Journal concluded that dolphin's sonar abilities may be bolstered by the animal's ability to benefit from nonlinear mathematics. These functions include addition, subtraction, multiplication and the calculation of ratios, says Discovery News.

Lead author Timothy Leighton of the University of Southampton's Institute of Sound and Vibration Research was inspired to carry out the study after watching an episode of Discovery's Blue Planet documentary, Discovery News reported, where he realized even the best man-made sonar couldn't operate correctly in the bubble nets dolphins create to confound prey.

"These dolphins were either 'blinding' their most spectacular sensory apparatus when hunting -- which would be odd, though they still have sight to reply on -- or they have a sonar that can do what human sonar cannot…Perhaps they have something amazing," Leighton told Discovery News.

The answer to Leighton's conundrum? Math - and not particularly simple math. The dolphins send out pulses that vary in amplitude, Discovery News reported, and the animals must perform a variety of calculations - including ratios and multiplication - so that they can "see" prey.

Although further tests need to be carried out before dolphin math skills can be fully confirmed, Discovery says, the study provides interesting insight in the possibilities of animal intelligence.

The research may also have implications for human-manufactured sonar systems, reported DailyTech in 2010. Leighton and his team studied dolphins sonar techniques to create shallow-water sonar technology that isn't confounded by bubbly conditions.

DailyTech reports that "TWIPS' design consists of trains of twinned pairs of sound pulses where the first pulse of each pair has a waveform that is an inverted duplicate of that of its twin," duplicating the complex techniques dolphins use to overcome bubble obstacles.

TWIPS could be of great use in identifying marine sediments, in manufacturing, and in harbor protection, DailyTech has said.