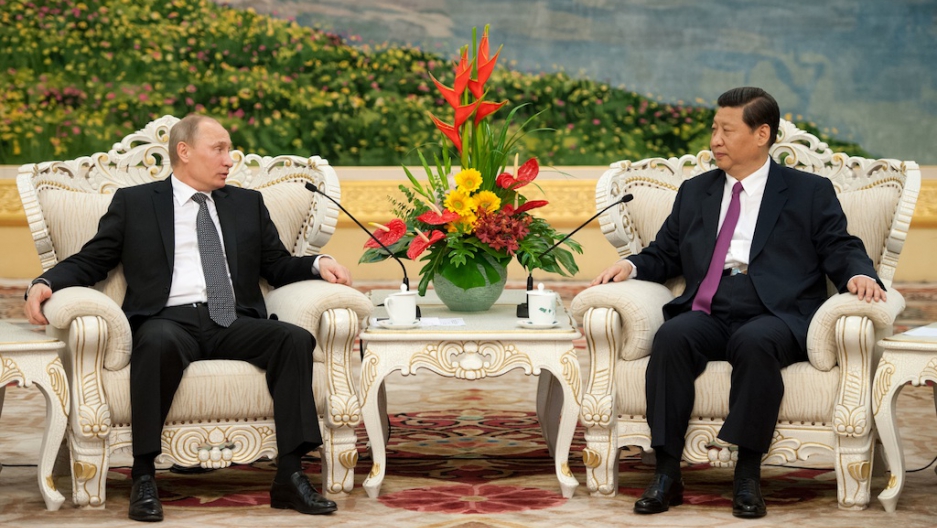 Russia's President Vladimir Putin (L) attends a meeting with China's Vice President Xi Jinping (R) prior to a meeting at the Shanghai Cooperation Organisation (SCO) summit at the Great Hall of the People on June 6, 2012 in Beijing, China. Today is the second day of President Vladimir Putin's three day visit to China, during which discussions will focus on approaches to Syria, Iran and the influence held by the United States in Asia.
Credit: Ed Jones
Share

For the third time on Thursday, Russia and China vetoed a Western-backed UN Security Council resolution threatening sanctions against Syria. And it isn't the first time this dynamic duo has acted to stop the possibility of foreign intervention against regimes killing innocent civilians.

The two countries blocked the Security Council from demanding an end to political repression and human rights violations in military-ruled Myanmar in 2007 and voted against a resolution against Robert Mugabe’s Zimbabwe in 2008.

Although Russia and China share some reasons for their decisions, other motives differ. GlobalPost’s Emily Lodish and Gregory Feifer debate Thursday's vote, and each country's role.

Although both countries say they stand against the violation of national sovereignty, Russia has taken the lead on the recent votes and therefore bears the lion’s share of responsibility for derailing the international effort to end violence that has killed more than 15,000 Syrians.

Like Russia, China wants to preserve its freedom to deal with critics and minorities at home as it sees fit. Beijing, which has a strong interest in maintaining the global stability necessary for its manufacturing economy to boom, has been happy to take the back seat, going along with Russia on the vetoes — or abstaining, as in the case of a resolution against Libya last year that allowed NATO to lead a bombing campaign against Muammar Gaddafi’s regime.

However, Russia also sees its Security Council seat as its chief weapon for its opposition to the West, something Moscow believes increases its importance in the world by giving it Cold War-era clout. Russia’s ambassador to the UN, Vitaly Churkin, defended his country’s veto by saying it was designed to “fan the flames” by countries motivated by their own “geopolitical ambitions.”

So, China may be letting Russia take the lead — and thus most of the flack, as per usual — but it is right there waiting in the wings ready to follow up.

China is against intervention on principle, largely as a way to counter Western hegemony. Beijing believes every state has the right to sovereignty, and no other nation has the right to impinge upon another's in their quest for it — even when rights abuses are being perpetrated.

Conveniently, this stance has served as a nice cloak for doing business with dictators of repressive regimes, namely in Asia and Africa (see vetoes to intervention in Myanmar and Zimbabwe in 2007 and 2008, respectively).

Most of the time, as is the case with Syria, China has economic growth as its priority. Damascus was the old-school hub on the Silk Road, and China still considers it to be important today. According to the European Commission, China was Syria's third-largest importer in 2010.

So, I think China is the bigger A-hole for the following two reasons: 1) being cowardly and letting Russia do their dirty work, and 2) brazenly pursuing economic interests as thousands of Syrians perish.

Somewhat ironically though, it was China's economic interests in Libya (which are larger than in Syria) that ultimately prompted Beijing to abstain from the "no-fly zone" vote at the UN. An abstention in that instance basically amounted to China tacitly condoning the intervention, and allowed for the no-fly zone to proceed.

Ultimately, China felt that their investments in Libya were being jeopardized by violence there, which then prompted them to change their tune on intervention.