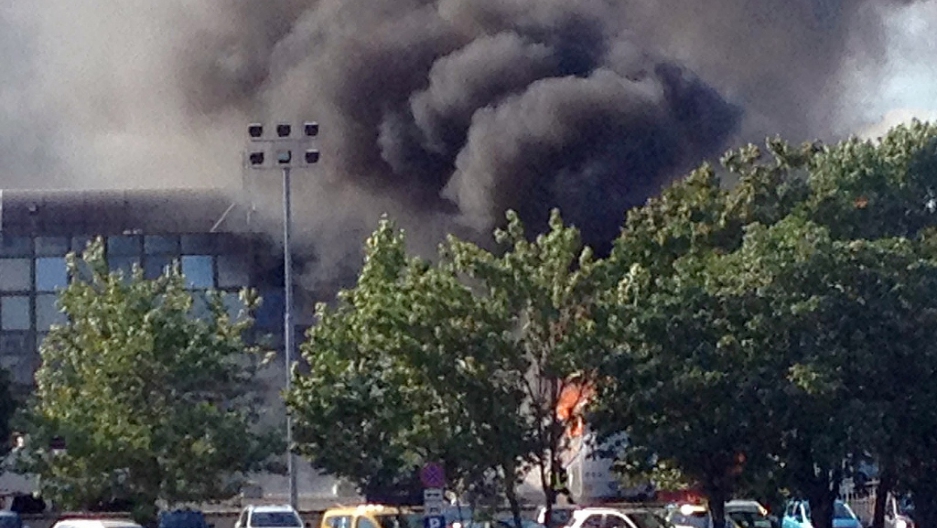 A picture shows smoke rising over Bourgas airport on July 18, 2012. At least four people were killed and dozens wounded on Wednesday in an attack on a bus packed with Israelis at a Black Sea airport in Bulgaria that the government in Israel blamed on archfoe Iran.
Share

A deadly bomb attack on a bus full of Israeli tourists in Bulgaria was likely the work of a male suicide attacker carrying a fake US passport, the Sofia News Agency reported, quoting the Bulgarian Prime Minister, Boyko Borisov.

The FBI, CIA and Israeli authorities are helping Bulgarians investigate Wednesday's attack, which killed at least seven people and wounded 34 others, when the bus exploded at Burgas airport, by the Black Sea.

Initially, authorities believed a bomb had been placed in the bus's luggage compartment, The Jerusalem Post reported, but investigators changed tack after counterfeit papers were discovered on the body of a Caucasian male. The Post reported that the man's body had also sustained the most severe damage, suggesting that he had detonated a device located on his person.

The passport that the suspect was carrying identified him as a resident of Michigan. According to the Associated Press, he was also carrying a Michigan driver's license. American investigators believe both documents to be fake, Prime Minister Borisov said.

In the hour before he boarded the bus, the suspected bomber was filmed on security cameras walking around the airport. Bulgarian authorities have released the footage (below); it shows a tall, white man with long hair, wearing shorts, a T-shirt and sneakers. He is carrying a large backpack behind and a bulky shoulder bag in front.

Fingerprints and DNA samples have been taken in a bid to identify him, Bulgaria's Interior Ministry said.

Netanyahu has since accused Lebanese Hezbollah of carrying out the attack on Iran's behalf, Bloomberg said.

According to the Wall Street Journal, Israel's deputy foreign minister, Danny Ayalon, says the government is preparing to submit a formal complaint to the United Nations against the two allies.

Both Iran and Hezbollah have denied any involvement, the Journal said. Iranian state TV dismissed the allegations as "ridiculous."