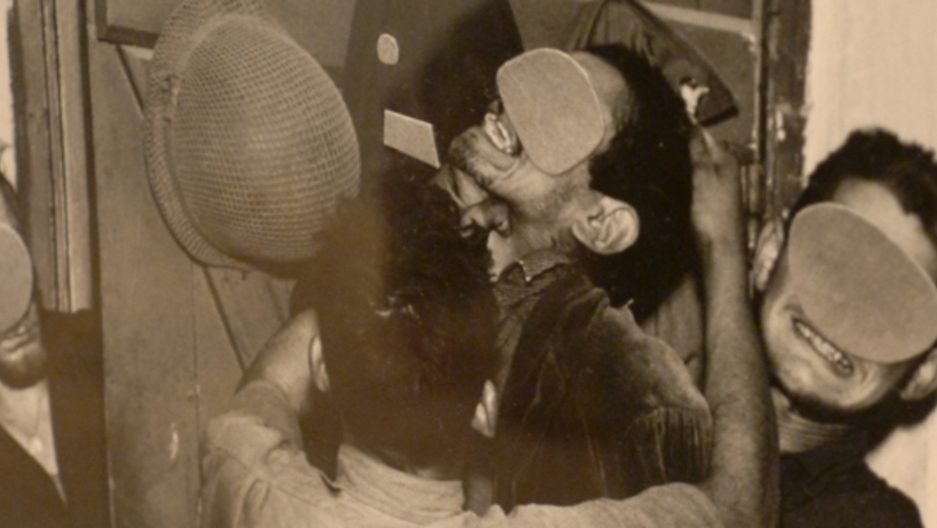 The French Army's exhibition on its 130 years in Algeria does the unthinkable. It recognizes its widespread use of torture during the Algerian War for Independence. One curator says this exhibit heralds a new era in openness in the military, with regard to France's colonial period. In this photo French military personnel are seen torturing a suspected FLN member.

Share
This year marks the 50th anniversary of Algeria's independence from France. Freedom was won through war, one that saw terrible atrocities committed by both sides. Despite that history, relations today between the nations have pretty much normalized. France is Algeria's largest trading partner. Hundreds of thousands of Algerians live in France. But there's a small group of Algerians who have never found reconciliation. They are the Harkis; they fought on the French side during the war, against their own countrymen. Serge Karel, who started life with an Arabic name, joined the French army in 1957. "I enlisted, becoming a Harki, because my father had fought for the French in WWI," Karel said. "Both my brothers fought for France in Indochina. For me serving France was the obvious thing to do. It was impossible to consider joining the other side." Karel was one of some 250,000 Harki who defended colonial France from Algerian independence fighters. When France was driven out in 1962, Karel expected to retreat to Europe with his French comrades. "But our commanders gathered us all together, took away our weapons, and just wished us good luck. I thought they were joking," Karel said. They weren't. The French army, under the government of Charles de Gaulle, left tens of thousands of Harkis behind. The victorious Algerians began to slaughter them, and their families. Karel was caught within days and imprisoned. "Each morning my captors paraded me before the townsfolk who would beat me, spit on me and throw rocks at me," he said. "I was tortured all over my body. They cut slivers off my tongue with wire cutters. My mouth became so infected I couldn't eat." By some miracle, Karel managed to escape and reach France. He was expecting a hero's welcome. Instead, they stuck him in an internment camp. "It wasn't Guantanamo, but it was similar," he said. "It was the shame of France, sticking entire families behind barbed wired like that. It was shameful." Like all the Harkis, Karel was eventually released. He went on to rebuild his life, finding work, starting a family, but he said France has never treated the Harkis well. Now 75, Karel said he understands that some Algerians consider him a traitor, but he can't understand how the French look down on him – sometimes in humiliating and very public ways. In 2006, a French politician named George Freche called the Harkis sub-human. "The French Army massacred your people in Algeria during the colonial period," he said during a confrontation in Montpelier, "and yet you still licked the Frenchman's boots." Some 90,000 Harkis managed to reach France after the war and they are still waiting for an official apology from Paris, said Fatima Besnasi, daughter of a Harki, and head of a national Harki association. "France is probably still ashamed, but I want that shame to be publicly stated," she said. "Above all, I want a French president to declare that France recognizes its responsibility for abandoning the Harkis in 1962, and how that led to the massacres in Algeria. France must also assume responsibility for interning our parents in camps." Movement towards accepting responsibility has been slow. In 2001 then President Jacques Chirac said France hadn't known how to protect her own children, a reference to the Harkis. In 2012 former President Nicolas Sarkozy said France "should have protected the Harkis from history." France's new president, Francois Hollande, has said he would flat out apologize. The Harkis are waiting. But while official France drags its feet, there are signs that French society in general has come to accept France's role in the Harki tragedy. The French Army has also stepped forward. At the Army Museum in Paris there is now an exhibit on the military's 130 year presence in Algeria. In it, the army recognizes its widespread use of torture during the Algerian war; there is even a section, albeit small, on the Harkis themselves. The museum's Emannuel Ronvoisy said 30-years-ago such an exhibit would have been unthinkable. But he said times are changing, and this is just the beginning of a new openness about the French colonial period. That's not all. This year there has been a slew of books, articles and documentaries on the subject. Benjamin Stora, a historian, said he thinks the Harkis have been given their rightful place in history, even if the government hasn't officially apologized. Stora said the Harkis now have their own National Day on September 25 and have monuments in their name. "We now have more French films about the war in Algeria than you Americans have about Vietnam," he said. But he added it's not enough; it seems the Harkis' wounds are too deep to heal. For Serge Karel, turning the page hinges on what France's president says, or doesn't say. The state must speak up, he said, since it was the state that abandoned him. "My life is good now," he said, "but I haven't forgotten anything. President Hollande, he has made the promise. But he must act on it as soon as possible because we Harki are all dying off."