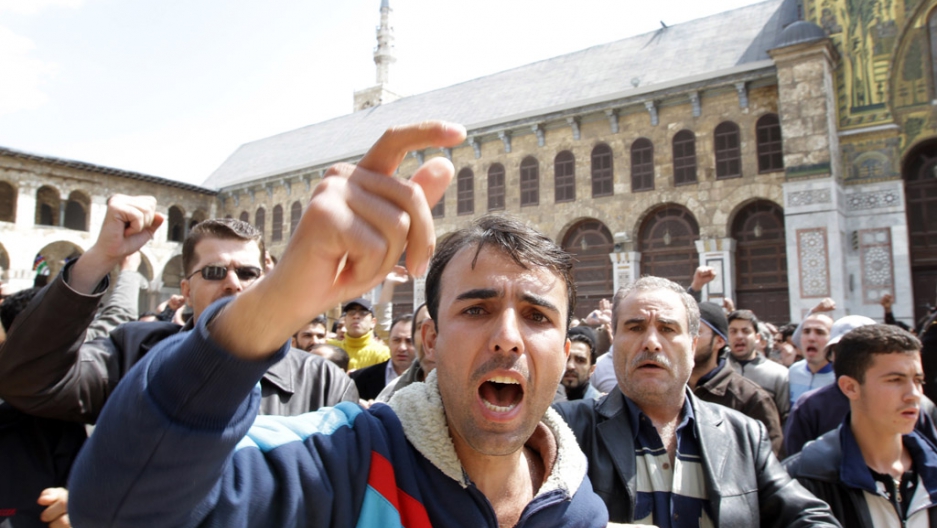 Hundreds of Syrians march from the Omayyed mosque in the centre of Damascus' Old City towards Souk Al-Hamadiyeh street on March 25, 2011 chanting "Daraa is Syria" and "We will sacrifice ourselves for Syria," as protests spread in Syria from the opposition's southern epicentre of Daraa to Damascus and a town south of the capital, where authorities moved to arrest at least five demonstrators.
Credit: -
Share

Important dates and events during the uprising against President Bashar al-Assad in Syria. More than 16,000 people have died since March 2011 leading up to the Damascus bombing on July 18, 2012.

MARCH 2011
Day of Dignity protest organized through Facebook for mid-March. Dozens chant slogans against President Assad’s Baath Party, in power since 1963. A week later, 100 people killed during violence in Damascus, Banias, Latakia and Daraa. Assad attempts to quell violence by releasing some political prisoners and lifting a 48-year-old “state of emergency.”

JULY 2011
Hundreds of thousands protest near Hama and Deir Ezzor, and scores die. Assad fires the Hama governor and the army kills 100 there on July 31. It’s a bloody month in Hama, Damascus, Aleppo, Idlib, Homs and Deraa. Activists meet in Istanbul in an attempt to form an opposition. Death toll at 1,500.

More from GlobalPost: Inside Syria: A revolution divided

AUGUST 2011
Violence rages as President Barack Obama and Western leaders call for Assad to quit. In Hama, 200 die the first week of the month and hundreds more in Deir Ezzor.

SEPTEMBER/OCTOBER 2011
About 30 killed in Homs and Rastan as death toll reaches 2,200 with another 10,000 imprisoned. Rallies call for security forces to defect. A new Syrian National Council presents front against foreign and domestic opposition. Russia and China veto a UN resolution condemning Syria.

NOVEMBER 2011
Tanks kill seven in Homs and the Free Syrian Army responds with its first significant action by attacking a Damascus military base. The Arab League imposes sanctions and suspends Syria after it fails to implement a peace plan and withdraw troops from residential areas. Syrian embassies around the world see protests.

DECEMBER 2011
Thousands of protesters greet Arab League observers in Homs, but the mission only lasts a short time because of the violence. Two suicide bombings kill 44 in Damascus, attacks the opposition says were government sponsored. Assad appears on American TV, telling ABC only a “crazy” leader would kill his own people. “We don’t kill our people ... No government in the world kills its people, unless it’s led by a crazy person.”

More from GlobalPost: Syria: Inside the latest assault on Saraqeb (VIDEO)

JANUARY 2012
A car bomb in Damascus kills 26, and a few days later a mortar attack kills French journalist Gilles Jacquier in Homs. UNICEF says as many as 384 children have died in the conflict.

APRIL 2012
More than 100 killed on April 9 while six people in Turkey are wounded and Lebanese cameraman is killed after shots are fired across borders. The UN-sponsored ceasefire comes into effect April 12, and monitors begin four days later.

More from GlobalPost: Inside Syria: There’s no place like Homs

MAY 2012
The Security Council condemns government use of heavy weaponry and the militia killing of civilians in Houla. At least 108 people die, including many children, in attacks in the region of Houla on May 25. France, the UK, Germany, Italy, Spain, Canada and Australia expel senior Syrian diplomats.

JULY 2012
Suicide bomb kills Syrian defense minister Dawoud Rajha on July 17. “Friends of Syria” agree to increase rebel aid at a meeting in Paris. Brigadier-General Manaf Tlas, who headed a unit of Syria’s Republican Guard and a long-time Assad ally, defects. Nawaf al-Fares, Syria’s ambassador to Iraq, defects and joins the opposition on July 11. Army and militias kill as many as 220 on July 12 in Tremseh. Opposition says entire families are wiped out, while the UN suggests defectors and activists are targets. On July 17, Damascus sees some of its heaviest fighting as armored vehicles clash with rebels.

August 2012
Syria's Prime Minister Riyad Hijab reportedly fled to Jordan with his family. Conflicting reports coming out of Syria said he was fired prior to fleeing the country. "I announce today my defection from the killing and terrorist regime and I announce that I have joined the ranks of the freedom and dignity revolution," Hijab said in a statement read in his name on Al Jazeera television.