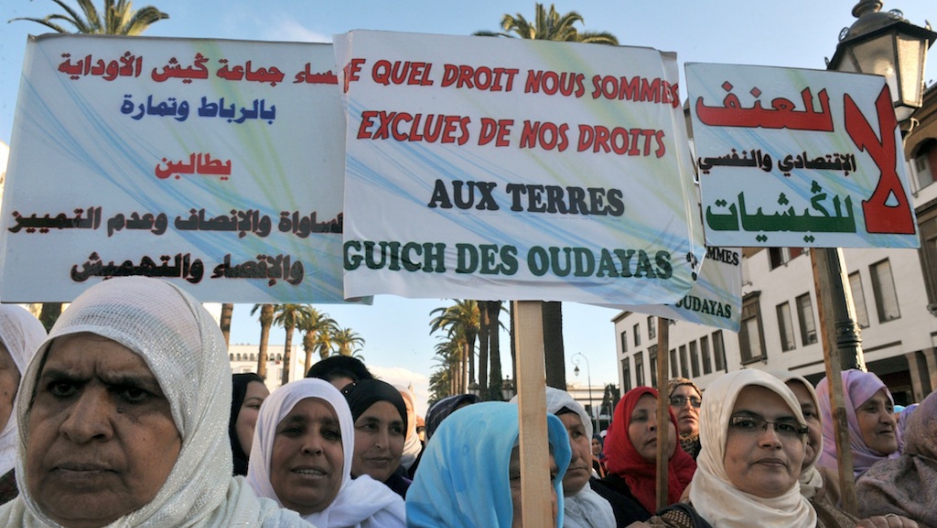 Moroccan women attend a rally during International Women's Day in Rabat in 2011. The poster reads 'We are denied the rights to our land'. Women across tribal areas are seeking changes in laws that would allow them to inherit family land.
Credit: ABDELHAK SENNA
Share

RABAT, Morocco — When Rkia Bellot’s family sold their communal land in 2004, each of her eight brothers received a share of the proceeds. But Bellot, a single woman, got nothing.

That’s because Bellot’s family land was part of the 37 million acres in Morocco governed by the orf, or tribal law. When this type of family land is sold, the unmarried or widowed women in the family, collectively called the Soulaliyate, often become destitute.

Bellot, now 66, wanted a better fate for herself, and launched a campaign against the practice with the help of a national NGO. Her fight to win ownership rights for women has emboldened fellow Soulaliyate to take on Morocco’s male-dominated judicial system and ancient traditions.

But the going can be tough for the millions of Moroccan women affected — in the face of little education, no skills and the ill will of the family.

“Morocco finds itself in a very contradictory position,” Bellot said. “On one hand the kingdom has signed all of the international conventions that call on men and women’s equality. And, on the other hand, we still encounter cases like this where women have no right to their own lands.”

The imbalance was particularly acute for Bellot, who had supported her entire family since age 20, when her father died. Yet her brothers gave her nothing from the sale, saying their hands were tied under tribal law.

Bellot's hometown is Kenitra, a port city 25 miles north of the capital of Rabat. After the land sale, the men in her family built nice houses for themselves and their immediate families. Their single female relatives, newly homeless, were relegated to a large shantytown on the periphery of Kenitra. Those homes, built mostly of mud and reeds with corrugated metal roofs held down by cinderblocks, were unstable. One spring, several collapsed during heavy rains. Today, the shantytown in Kenitra has been cleaned up, but women still face opposition when lobbying for property rights.

The troubles of Aziza Innouch, also part of the Soulaliyate, began with the death of her father last year in Ain Cheggag, a village 16 miles outside of Fez. A widow with three children, Innouch had lived on the property her entire life, but when she asked her brother for her share of the land, he denied her requests.

The family land is fertile, and Innouch, who lives in a two-room cement home she purchased from her parents, says she hoped to sell her portion to provide for her children and herself. However, without the land, she was forced to take any work she could find around the village, usually weeding and picking crops in a neighboring family’s fields. The work is hard, and hard to find, as many farmers prefer younger women to pick crops.

Innouch and other women from the tribe, some of whom have received death threats or even been put in jail for demanding rights to their land, have tried taking their case before the town council, but all their written requests have been ignored. When they go to confront the caid, or village chief, in person, they say the response is not much better.

“The caid uses big words and then we can’t understand what he’s talking about,” Innouch explained.

Innouch believed she might have more success by appealing to the Moroccan court, but in April, on the day she was supposed to present before a judge in Fez, her brother arrived at the hearing with a document stating that Innouch violently beat their mother.

The court said that the document, which had been signed by a local doctor, was grounds for imprisoning Innouch. However, her brother agreed to drop the assault charge if she would also drop her case demanding land inheritance, so she did.

More from GlobalPost: Lesbians in Morocco: Should we stay or should we go?

Bellot says that she had a similarly frustrating response when she approached tribal leaders years ago.

“They would say, ‘Well, we can’t do anything, it’s the tribal law.’ I researched until I was 100 percent sure that this was just a brazen injustice.”

Bellot sought help from a lawyer in Rabat, but he told her that chances of success through the legal system were slim. So, along with a small group of women from Kenitra, Bellot sought help elsewhere—from the Democratic Association of Moroccan Women (ADFM), a national NGO that advocates for the advancement of women’s human rights throughout Morocco.

The ADFM adopted Bellot’s cause and began training the women from Kenitra in civic leadership and public speaking. In addition, the ADFM covered the cost of transportation so that the Soulaliyate women could afford the 50 Dh (about $7 USD) trip to Rabat to participate in sit-ins and demonstrations in front of Parliament. As the ADFM learned the extent of the Soulaliyate land problem, they expanded their efforts to include women from all areas of Morocco. But in a country where illiteracy rates among rural women are over 80 percent, this often presented a challenge.

“Most of the women are illiterate so these communication tools had to be adjusted to each case,” said Khadija Ouelammou, who is in charge of handling all Soulaliyate issues at the ADFM’s Rabat office.

Although they provide considerable support for the women, the ADFM makes it clear they are not speaking for the women, nor will they do all the work. In each village, they identify one Soulaliyate woman who can act as a liaison between the ADFM and the community, and they leave most of the organizing to the local leader.

Bellot organized a protest of 500 women in front of Parliament in 2007. Finally, three years later, she saw results when the Ministry of the Interior issued a circular — a government order — that instructed tribal leaders to recognize the rights of Soulaliyate women to receive money when their family’s communal lands were sold.

Bellot and her colleagues’ successes have drawn international attention. On a recent visit to Morocco, Michelle Bachelet, the Executive Director of the UN Women’s Program, delivered a special address to the Soulaliyate women.

“You, the Soulaliyates, succeeded in mobilizing the media and public opinion against the violation of your rights. I congratulate you for obtaining official recognition of women’s rights,” she said.

But according to many Soulaliyate women like Innouch, there is still much more to be done. Many communities have ignored the circular from the Department of the Interior that instructed tribal leaders to compensate women when land is sold.

Innouch says that she refuses to stop working until her story is heard and she receives her share of the communal land. She has been in contact with the ADFM and says she is starting to learn the words she needs to confront the village chief.

In the next months, she plans to start a local association that can organize local Soulaliyate women to meet with the tribal council and secure inheritance rights for themselves in the village.

The solution, says Bellot, will not come without political will from the government. She supports the ADFM’s petition for a nationwide law — more compelling than the 2005 letter or 2007 circular — to guarantee that Soulaliyate women have inheritance rights to communal land. The law would allow Soulaliyate women who live on communal lands to have equal access to communal property, along with the right to farm the land or otherwise use it for private means, and to receive fair compensation when communal lands are sold.

Bellot says she will not stop until the government acts, but she sees some rays of hope. For one thing, in Ain Chekaf, a small community just outside of Fez, a local NGO says that the community has adjusted to life without the tribal law fairly seamlessly.

What led the Soulaliyate women in Ain Chekaf to protest for their right to own land?

They say they heard the story of Rkia Bellot.

With reporting assistance from Oumaima Azzelzouli

For more of GlobalPost's coverage of women in North Africa and the Middle East, check out our Special Report, "Life Sentence: Women & Justice in Afghanistan."