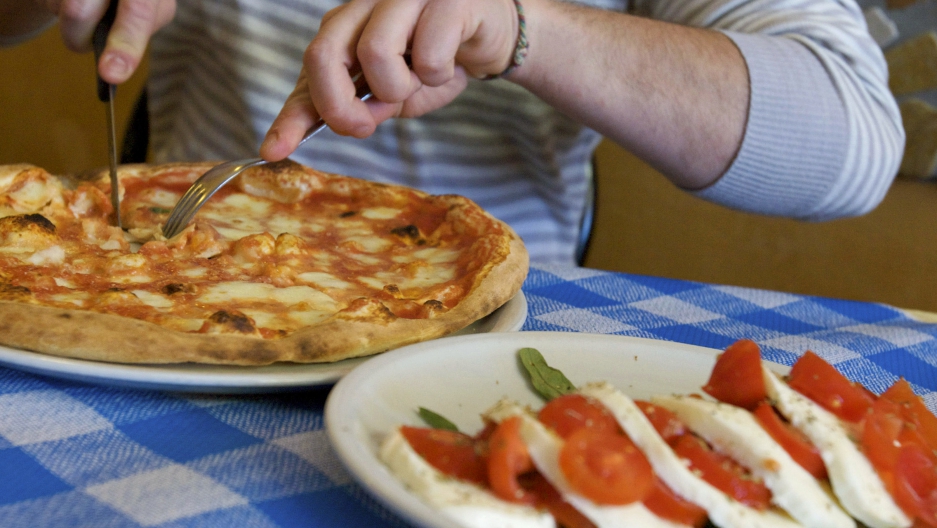 A client eats a pizza Margarita (Bufala Mozzarella cheese, Tomatoes) and an Insalata Caprese (salad made with tomatoes and mozzarella) in a Naples' restaurant on March 28, 2008.
Credit: ROBERTO SALOMONE
Share

Italy's biggest buffalo mozzarella maker, Giuseppe Mandara, has been arrested on charges he had close ties to the mafia.

Mandara, 56 — who once dubbed himself the "Armani of Mozzarella" — was arrested with three associates near Naples, reports said.

"We have seized the whole company," Paolo Di Napoli, an officer from the environmental protection section of the Carabinieri police told Agence France-Presse.

The company is also accused of producing counterfeit cheese — allegedly mixed cow's milk with more expensive buffalo milk that is the key ingredient in the trademark soft white cheese.

The company has also been accused of producing batches contaminated with ceramic shards from a faulty machine, Britain's Daily Telegraph reported.

Police said the links between Mandara and the mafia went back to the 1980s, when the Casalesi clan helped rescue his business from bankruptcy with cash injections.

According to the Telegraph: "The clan is based in and around the town of Casal di Principe, at the heart of a region famous for its mozzarella, which is produced from the milk of domesticated buffalo."

Mandara mozzarella is sold across the world, according to the BBC.

It is a key ingredient in classic Italian recipes such as the caprese salad and the trademark Neapolitan pizza.

After his arrest, Mandara was shown being led away by police with a cigar in his mouth, BBC wrote.