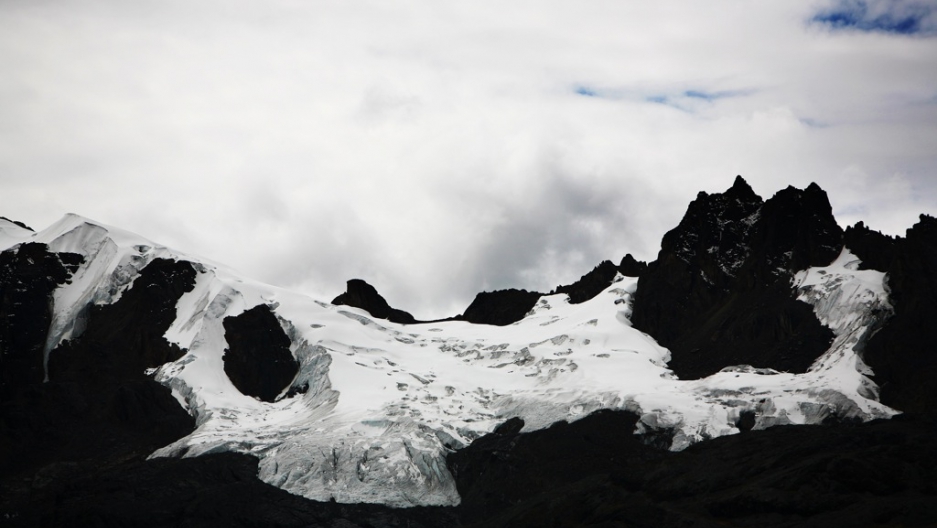 ANTISANA, Ecuador — Our crampons crunch into the ice and the wind whips the tepid drizzle into our faces.

High on the glacial flanks of Antisana, Ecuador’s fourth highest summit, the signs of climate change are unmistakable.

"It breaks my heart to see the way these mountains are changing,” he adds. As he speaks, storm clouds loaded with water vapor from the Amazon gather around us, threatening to make our tour of Antisana a miserable experience.

Helmets on, ice axes in hand and roped together to manage the risk of falling into a crevasse, we wind our way up the mountain’s main glacier.

As we approach 16,000 feet, a huge rock-field and alpine lake come into full view below us. It is a breathtaking, deeply troubling sight.

Just a decade ago, the whole area — at a guess, the size of New York’s Central Park — was blanketed by the glacier.

But the warming climate has raised the equilibrium line — the altitude at which the glacier remains stable without gradually melting away.

Later, Ecuadorean glaciologist Marcos Villacis tells me that between 1979 and 2007, Antisana lost roughly 40 percent of its glacier cover — 3.3 square miles.

Like the poles, the Andes are unusually sensitive to climate change, with areas above 12,000 feet expected to experience particularly strong rises in the mercury. In the last 25 years, average recorded temperatures on Antisana have already jumped by 1 degree Fahrenheit.

That poses huge problems for Ecuador, where millions depend on Andean run-off for their water.

Subsistence farmers will be hit but so will city slickers — Antisana and the surrounding spongy grassland known as the “paramo” provide the 2 million residents of the Ecuadorean capital, Quito, with one-third of their water.

“Where it is going to be most critical is if the climate of the paramo is totally altered,” says Othon Zevallos, head of EPMAPS, Quito’s municipal water authority.

Compared to the glaciers, the paramo’s delicate ecosystem and unusual capacity to store and gradually release water are little studied or understood.

EPMAPS is already preparing to spend hundreds of millions of dollars over the next 15 years to help compensate for the lost water. That includes the construction of a 13-mile tunnel through the Andes, the world’s second-highest mountain range, to bring water from the Amazon.

It is also buying up more than 50,000 acres of ranchland established on the paramo around Antisana, to protect it from the heavy hooves of horses and cattle, as well as the highly destructive grazing of sheep, which rip up the grass by the roots.

Interestingly, llamas and alpacas, the Andes’ traditional livestock, have much softer pads on their feet and only eat the tips of the grass, allowing the paramo to thrive.

Antisana is typical of the Andes, home to 99 percent of the world’s tropical glaciers, says Bernard Francou, a glaciologist with the French government’s Development Research Institute. In Bolivia, Peru and Ecuador, where most of the glaciers are concentrated, losses in ice cover range from 30 percent to 50 percent.

He cautions that the picture is complicated, and that there are still many unknowns. But across the region, from Venezuela to Bolivia, the snowline is gradually moving upwards, roughly 300 feet for every degree Fahrenheit, with an expected temperature rise in the high Andes upwards of 6 degrees.

“Initially we are actually observing an increase in the flows [of melt-water] but this will not last for long, maybe a few more decades,” warns Francou. “Then, of course, there will be less. How much less, we don’t know yet.”

As we descend, Ignacio and I pass a series of gushing streams that have carved deep gashes into the glacier’s surface.

Normally, glaciers melt principally from their underside, yet these streams are not unusual given the intense sun here, just a few miles south of the equator. But as this glacier slowly vanishes, the volume of surface water may be atypical.

As we descend further, we bump into two students from Ecuador’s National Polytechnic university who are tugging at a tube embedded in the glacier. The pair, the only other people we see in three days on Antisana, are measuring the glacier’s depth as part of a research project supervised by Francou.

Not only is the glacier shrinking from the bottom up. It is also losing between 14 inches and three feet in thickness every year. During El Niño years, when the temperature rises further, it can shrink by up to six feet.

After chatting with the students, Ignacio and I head back to basecamp. "As the snow and ice disappear, a lot of the classic routes in the Ecuadorean Andes will become unclimbable,” Ignacio tells me.

“The ice is what stops loose rocks and boulders from falling down the mountains, and now that it is disappearing, many of these routes will just be too dangerous.

"As a father of a 2-year-old son, I really wonder what this landscape is going to be like when he grows up."