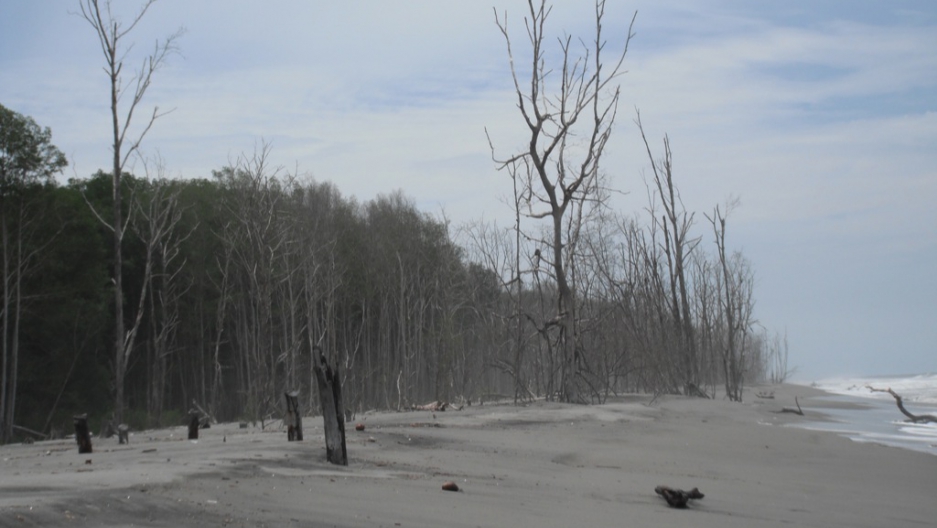 LA TIRANA, El Salvador — “Where would we go?” asks a baffled Nahun Diaz as we survey the dead mangrove trees jutting like giant skeletons from the windswept Pacific beach.

Apparently triggered by climate change, the rising ocean has advanced nearly 1,000 feet since 2005, he and his neighbors say, destroying the mangrove forest where they eke out a precarious living collecting “punche,” a local crab species.

On a good day, wading through the mud at low tide, Diaz can collect two dozen or so, which he then sells for about $3.50.

With that meager income, Diaz and the other villagers of La Tirana, in the Bajo Lempa region of western El Salvador, complement their subsistence farming and fishing. They use the cash to buy basics such as clothing, cooking oil and soap.

There now remain another 1,500 feet of mangroves. Diaz and his neighbors are at a loss as to what they will do when that is also overrun by the crashing waves.

This tiny Central American nation will lose between 10 percent and 28 percent of its coastal territory in the next 100 years, according to El Salvador’s Ministry of the Environment and Natural Resources (MARN).

Those two scenarios are based on whether sea level rises by 5.1 inches or 43.3 inches, two extremes predicted by some current climate change models.

The UN’s Intergovernmental Panel on Climate Change warns that sea level rise has already begun. It’s caused by both the thermal expansion of the oceans and flows of melt-water from the Arctic and other ice masses.

Now, it threatens to plunge many of El Salvador’s most vulnerable citizens into even deeper poverty.

“We have no electricity, no running water and no medical post,” says Diaz, a 26-year-old father of three, and the village president. “But at least we have the punche and we are happy here.”

The left-wing government of President Mauricio Funes is actively seeking international funds to help El Salvador, one of the poorest nations in the Americas, cope with climate change.

“The government, of course, wants money,” says Ricardo Navarro, president of CESTA, the Salvadoran branch of Friends of the Earth. “But it has done little to show that it is managing its own environmental responsibilities, or to cut El Salvador’s own carbon emissions. Without committing to that, it will be even harder than normal to get money from foreign donors.”

Yet it is not just rising seas that, according to scientists, make El Salvador highly vulnerable to climate change. Climate chaos, in the form of increasingly frequent storms and unpredictable rainfall, is also already wreaking havoc here.

A mile inland from La Tirana, the village of Octavio Ortiz lies next to the Lempa River, the country’s largest waterway.

“Mitch was the first time. It came up to the roof,” says Herminia Arqueta, as she recalls how the Lempa catastrophically burst its banks during the unprecedented 1998 hurricane that killed thousands across Central America.

But since then, the Lempa has repeatedly flooded, inundating the homes of Arqueta and her neighbors, albeit on a smaller scale.

“Now it is virtually every year,” says the 46-year-old widow and mother of five who grows or rears all of the food her family eats. “Come September, you have to always be prepared. It was never like this before.”

During the last major storm, named 12E by meteorologists, in October 2011, the floor of her cinder-block, two-room house was under two feet of water for three weeks.

She also lost an entire harvest of corn and rice financed with a $1,000 bank loan, which she still has to pay back.

Arqueta is so desperate that she is considering selling five of her seven dairy cows — her most prized asset — at $200 a head.
In addition to providing a badly-needed source of nutrition for her and her three youngest daughters, aged 11 to 18, the milk from those cows also generates her only regular source of income, some $2.50 a day.

“It would be a disaster losing them,” says Arqueta. “We barely survive thanks to them.”

El Salvador experienced just one such extreme storm — defined by MARN as either a severe tropical cyclone or torrential rain triggered by a major low-pressure system — in both the 1960s and 1970s, and two in the 1980s.

But then something happened. There were four in the 1990s and eight in the 2000s.

The effect of those storms has been compounded by El Salvador’s historical legacy of ecological devastation. In the Americas, only Haiti has seen a greater proportion of its surface area deforested.

More from El Salvador: Can a gang truce hold?

Now, with just 2 percent of its original forest cover standing, El Salvador’s natural watersheds are unable to absorb and slowly release the runoff from the storms that strike Central America every fall and winter.

The result? Catastrophic flooding downriver in the Bajo Lempa.

“The mismanagement of the environment over decades has made us more vulnerable to climate change now,” says Navarro pointedly. “If we still had our forests, we would be much better able to cope with the storms.”

As we paddle back from the beach through the still waters of the mangrove forest to La Tirana, the sound of the crashing waves slowly fades into the background.

But despite all the climate modeling going on in many of the world’s top research institutions, no scientists have yet come to study this isolated stretch of the Salvadoran coast.

And I am unable to answer Diaz’s plaintive question: “How long will it be until the waves reach La Tirana?”