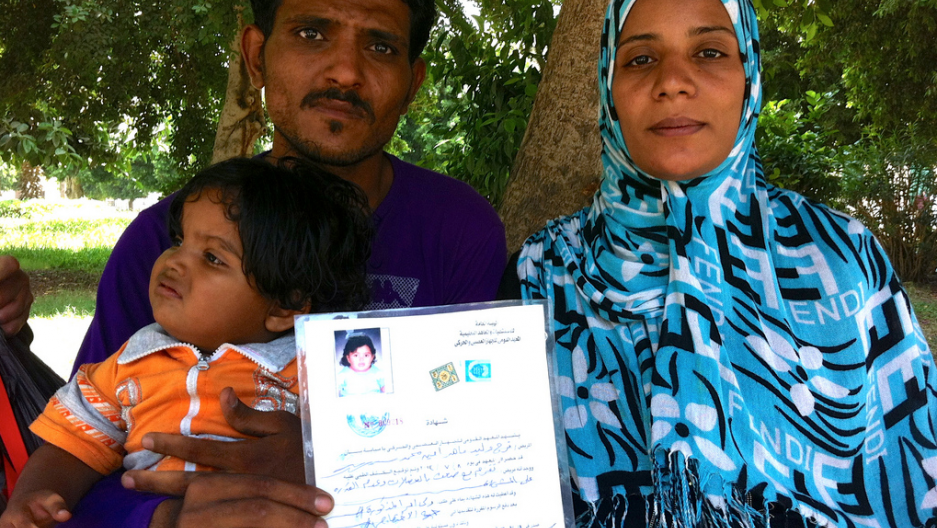 Walid Maher is asking the president for a better job or help with his 3-year-old daughter's medical bills. He earns about $3 a day. (Photo by PRI's The World.)

This never would have happened when Hosni Mubarak was president.

On Friday evening, a few dozen protesters gathered outside the gate of Kasr al-Ittihadiya, one of three presidential palaces in Cairo. It was a small demonstration by Egyptian standards.

On this street, next to the place where the ousted dictator used to conduct affairs, Egyptians knew they could be stopped just for walking down the sidewalk in a group of five or more people.

A large demonstration here would not have been tolerated.

Hundreds of riot police were lined up outside the palace. And they stood by, looking bored, as protesters sent a message to their new president.

“Mohammed Morsi was brought to power by the revolution,” said activist Mohammed Talaat. “He has an obligation to free thousands of protesters still in military custody. This should be his top priority.”

Talaat said he hoped the president is being honest when he says he is listening to the concerns of the people. They have no small amount of concern.

That was apparent on Saturday morning outside Abdeen Palace in downtown Cairo, another seat of government where President Morsi is expected to conduct official business. Outside one of the entrances, several dozen people gathered to submit personal petitions to the president himself.

Mahahten Abdel-Moneim Ibrahim came to Cairo from the Nile Delta town of Mansoura, a few hours drive away. She held a hand-written plea to President Morsi and waited for her turn to enter the palace and submit the petition to officials inside.

Ibrahim said her 34-year-old son got married almost a year ago. But he could not afford the rent and lost his apartment. Now, he is living at his parents’ home and he is desperate. The young man even threatened to kill himself out of shame, she said.

“Please, can the president help her son and daughter-in-law find a place to live?" she said.

When asked if she expected Morsi to fix things, Ibrahim said, “Sure, God willing.”

A young father named Walid Maher came to the palace with his pregnant wife and their disabled 3-year-old girl.

“I make $3 a day selling packets of tissues on the street in Cairo,” he said. “My daughter’s medical bills add up to about $30 a week.”

The toddler can’t talk or walk, he said, and she needs surgery that costs more than $30,000.

Maher said he came to ask Egypt’s president for a better job, or at least some housing assistance, just to get by.

Morsi is said to be locked in a power struggle with the powerful Egyptian military. But listening to people’s stories outside the palace offered a close-up view at the president’s biggest challenge: meeting the daily needs of millions of people living at the bottom of Egypt’s crippled economy.

The former leader with the Muslim Brotherhood has promised the Egyption public big things. He has vowed to deal with the following five priorities in his first 100 days: traffic, trash, security, food and fuel. On top of that, Morsi’s government opened up two public complaint offices.

And they are still coming in, from Egyptians like 60-year-old Mohammed Abu-Zeid Shayhoun.

Standing outside Abdeen palace, Shayhoun said he is nearly blind and can no longer work. He lives with his wife and four kids in a one-room apartment in Cairo and he brings in a pension of about a $1 a day.

“I went to local officials to ask for assistance and they told me to go ‘ask the revolution,’ ” Shayhoun said. “It was us, the poor people, who made the revolution happen. If President Morsi doesn’t help us, we will have another revolution and we’ll get rid of him too.”

The ruling military council says it wants to hand over power to a civilian authority, but the generals still control most of the levers of political power in Egypt. Morsi is staking his political success on electoral politics. The question is, has he set himself up for failure by raising impossibly high expectations?

Mohamed El-Baltagy is a member of parliament and a senior official with the Muslim Brotherhood’s Freedom and Justice Party.

“No one leader can solve everyone’s problems,” Baltagy said, at the party’s headquarters in downtown Cairo. “But President Morsi takes these petitions from the public seriously.”

Baltagy says it's not the time or the place to be making demands of the new government, though.

"People will see the president is serious, when he starts to deliver on his promises," he said.