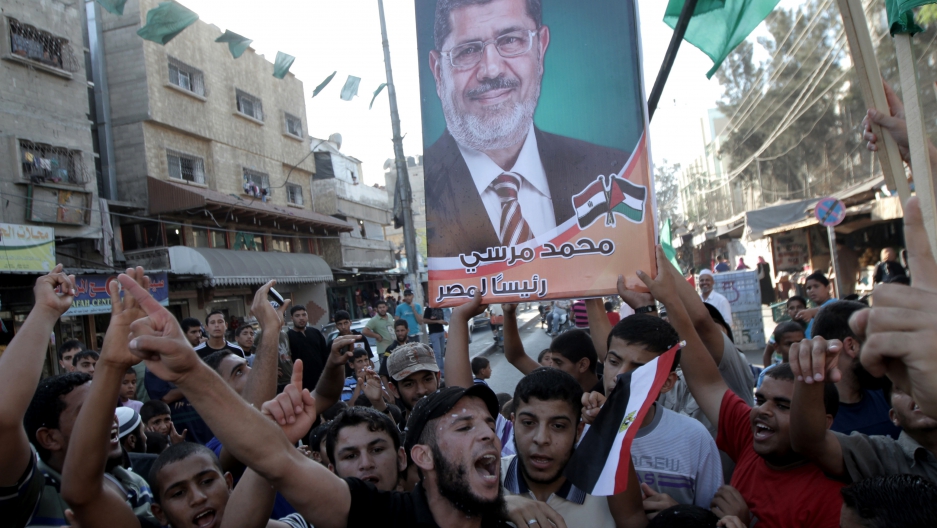 Palestinians wave Egyptian flags and posters as they celebrate the victory of the Muslim Brotherhood's presidential candidate, Mohamed Morsi, in the Egyptian elections in Rafah town, in the southern Gaza Strip, on June 24, 2012.
Credit: Said Khatib
Share

Officials, analysts and rights activists here in Gaza say the recently elected Islamist leader is in a unique position to at least make some progress toward that end.

As an important first step, Morsi could help unite the rival Palestinian factions, Hamas and Fatah.

The two have been bitter enemies since they fought a brief civil war in Gaza in 2007, leaving the coastal enclave ruled by Hamas and its sister territory, the West Bank, administered by Fatah. The rift has further stalled negotiations with Israel for a Palestinian state.

Officials on both sides of the divide, as well as independent observers, expect Morsi, a fresh-faced leader sworn in earlier this month, to compel the opposing groups to form a caretaker government, and potentially end the crippling economic blockade on Gaza by re-opening Egypt’s crossing at Rafah.

“Morsi can hold the keys to, or play the role of catalyst in, some sort of brokered reconciliation,” said Dr. Sabri Saidam, the deputy head of Fatah’s West Bank-based internal legislative body, the Revolutionary Command Council.

Mahmoud Abbas, Fatah leader and president of the Palestinian Authority, is scheduled to meet Morsi in Cairo on July 18.

“It’s clear there’s a new era in Egypt,” Saidam said. “Perhaps Morsi will put some energy in the moment to make reconciliation [among the factions].

Some doubt that Morsi will be able to stand up to the United States, which labels Hamas a terrorist organization, and which might try to prevent him from making any meaningful headway.

In a meeting with Morsi on Saturday, however, US Secretary of State Hilary Clinton called on Hamas and Fatah to reconcile, indicating there might be room for compromise.

“It has to be a bargain. Morsi should say to the United States: ‘I cannot live with the siege on Gaza and the division of the Palestinians,” said Eyad Sarraj, a Gazan psychiatrist involved in the reconciliation talks, and who served as a consultant to the Palestinian delegation at the Camp David peace accords in 2000.

“He should say: ‘If you want to have relations with Egypt, this is what I want. I am not Mubarak.’ There’s a good chance the Americans will accept.”

Palestinians are hopeful that Morsi — unlike his US-backed predecessor, Hosni Mubarak — will be more willing to break with the stalemate of the past and act as a neutral, strong negotiator that is less beholden to outside powers.

Leaders of Morsi’s Freedom and Justice Party said uniting the Palestinian factions are a top priority in order to end the suffering of Palestinians in Gaza, which is still hemmed in by a joint Israeli-Egyptian blockade that prevents free travel and commercial exports.

Right now, roughly 1,000 people travel between Egypt and Gaza each day — but no commercial goods are allowed through.

“[Reconciling the factions] is definitely a priority, because the blockade is a direct result of the division between Hamas and Fatah,” said Abdel Rahman Saeed Al Shourbagy, the head of the Freedom and Justice Party in Egypt’s North Sinai province, which borders Gaza.

“This is causing suffering among the Palestinian people, and Morsi will not tolerate injustice during his rule.”

More from GlobalPost: In Israel, life under fire isn't always so bad

Hamas and Fatah signed a landmark, but short-lived, agreement in the wake of the Arab uprisings last year, but the deal has since faltered. Both sides accuse the other of backtracking on crucial aspects of the accord.

Outside of those two issues, the restructuring of the Palestine Liberation Organization — a council representating all Palestinians, even those outside the West Bank and Gaza — is on the agenda.

Hamas, itself an offshoot of the Muslim Brotherhood in the Palestinian Territories, expect Morsi to support his Islamist counterparts in Gaza.

“We call upon Egypt to make this crossing open around the clock. And to liberate it from the restrictions imposed on it,” Hamas Prime Minister, Ismail Haniya, said at the inauguration of the new crossing at Rafah on the Palestinian side last week.

“We want it to be a commercial crossing between Gaza and Egypt. We want to open a new page with Egypt,” he said. “Egypt has always been with and is still supporting Palestine. Gaza needs the will of Tahrir Square to liberate it.”

But one senior United Nations official in Gaza, speaking on condition of anonymity, said Palestinians here “are over-optimistic about the ability of Egypt to change their daily lives.”

Morsi indeed has mammoth domestic issues to deal with, including working out his powers with the military, resuscitating an ailing economy, shoring up international support for his government and presiding over the drafting of a new constitution.

“We need to have some quiet in Egypt first, allow Morsi to carry out his first 100 days,” Sarraj said. “Then he can calculate the issue of Gaza and Hamas. But it is still a very important issue to the Muslim Brotherhood.”