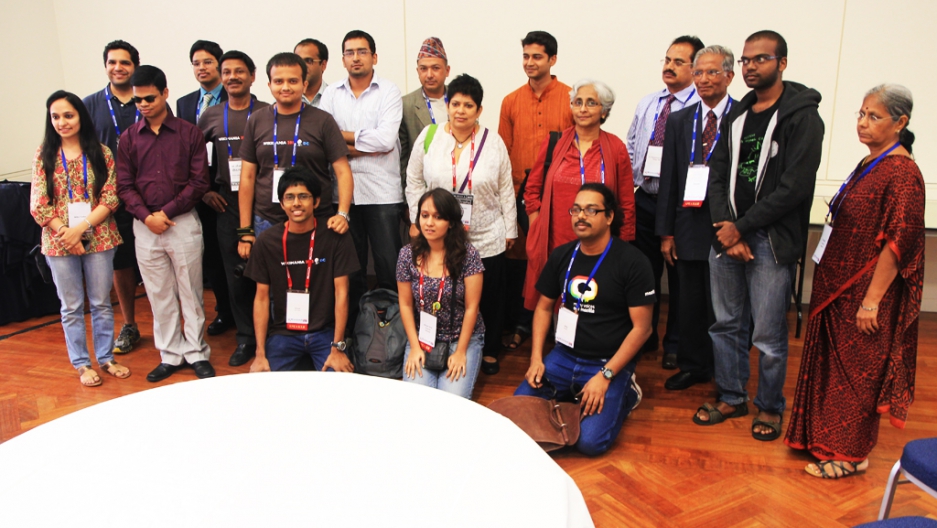 Wikipedians from India gather at the Wikimedia 2012 conference in Washington DC. India has had a Wikimedia chapter since January 2011.
Credit: Faine Greenwood
Share

WASHINGTON, DC - You may use Wikipedia for gathering information on just about everything. But have you stopped to consider the people who put it all together? Strictly volunteers, Wikipedia writers and editors are both remarkably diverse and extremely passionate about what they do.

For them, Wikipedia isn't just a hobby—it's a way of life and part of an international movement in information-sharing.

Who are these people, anyway?

What unifies them? A passion for knowledge—especially free knowledge.

Here are six Wikipedians who write articles and work behind the scenes to keep Wikipedia running.

Patricio Lorente got his start in Wikipedia in Buenos Aires, where he works for La Plata University. "In the end of 2004, beginning of 2005, I decided to give [Wikipedia] a try," says Lorente.

Lorente was recently named to the Board of the Wikimedia Foundation, where he hopes to focus on reaching people in non-English-speaking countries. "Everything we do...should be intended to empower local communities," Lorente says.

"I really don't like the name Global South," he adds. "It seems like there's a single entity there, and there's no single entity.... It’s not the same to develop an outreach project in South Africa and in Kenya, in Argentina, in Bolivia. If you don't take into account these differences, you're not going to succeed."

Twenty-five-year-old Anirudh Singh Bhati’s Wikipedia journey began when he realized there were no articles about his university online—so he created one.

As Bhati, a native of Ahmedabad, India, continued to write articles on subjects ranging from law to Indian politics to Southeast Asian history, he realized Wikipedia was useful in school, as well.

"I would just hear what was being taught, and do some research and create an article," says Bhati.

After six months on Wikipedia, Bhati had made about 3,000 to 4,000 edits. Now, Bhati is one of seven co-founders of Wikimedia India, which first launched in January 2011.

So what can academics and students get out of Wikipedia editing? Lots, says Bhati.

"It's different than sitting in a class and learning a subject. That's a one-way communication. It's not the same as researching the whole thing and writing about it.”

Did you know Wikipedia's editorial ranks are dwindling? That's a major problem, especially considering Wikipedia has approximately 480 million readers a month, supported by only 80,000 active editors.

That's why San Francisco-based Karyn Gladstone has stepped in to aid Wikipedia in its quest to recruit new editors. As the Wikimedia Foundation's Director of Community Operations, she’s behind many of Wikipedia’s experiments in attracting a more diverse editorial pool.

"Not everyone has the time to sit down and write an entire article,” she says. “My goal would be to get people to contribute, in whatever way fits into their lifestyle,” says Gladstone.

More from GlobalPost: Homework without Wikipedia

“People seem to get a lot out of editing Wikipedia,” she says. “They find self expression, people enjoy looking at how many times something they wrote was viewed by other people..... Most people who edit Wikipedia regularly think it's fun.”

Wikipedians are making inroads just about everywhere, including at the National Archives of the United States. Twenty-five-year-old Dominic McDevitt-Parks was recently hired as the Archives' first Wikipedian in residence, where he serves as a liaison to the Wikipedia editor community.

So how did McDevitt-Parks, a self-described Latin American history nerd, become interested in Wikipedia? “I felt like Wikipedia, for me, was the best mechanism for self-study ever,” he says.

A dual-degree masters student in the History and Archives Management program at Simmons College in Boston, McDevitt-Parks feels Wikipedians represent a new form of volunteerism.

“For the National Archives, working with Wikipedia seems kind of natural.”

For Frenchwoman Florence Devouard, who edits under the username Anthere, Wikipedia is not just a hobby, but a calling—and a business. One of Wikipedia’s first leaders, she succeeded founder Jimmy Wales as the Chair of the Board of Trustees for the Wikimedia foundation between 2006 and 2008.

Devouard got started with Wikipedia in 2001, upon realizing Wikipedia France, which she co-founded, was short on articles. In 2004, she joined the board of the Wikimedia Foundation.

As for women’s participation in Wikipedia? “We are not numerous, but we are high quality,” she says. One third of Wikimania 2012 attendees were women; Devouard speculates that women have less free time to edit, especially in middle age.

But there’s one way to solve the time problem: recruit retirees as editors. “We can pair teenagers with older people,” Devouard says. “Older people are much more polite...they don’t bite as much!”

This 29-year-old Iranian English professor uploaded an article to Wikipedia on a scientist friend in 2004, which was soon flagged for deletion. In the process of fighting the decision, he got hooked. Mardetanha now has 80,000 global edits, with around 50,000 edits in Persian.

So why does Mardetanha devote so much time to Wikipedia?

“It helps you to bring knowledge to people who don’t have enough money to buy a computer, to be in a good city, to live close to a library,” says Mardetanha.

“You donate your knowledge, the things you have in your mind, to people who need it more than you. It’s pretty awesome.”

Wikimania 2013 is slated to be held at Hong Kong Polytechnic University.