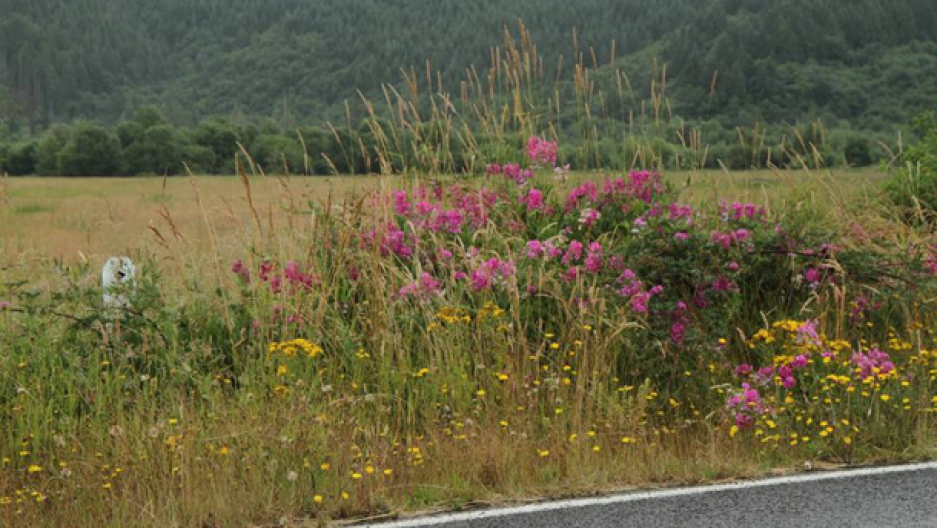 This county road in Lane County, Oregon, is not sprayed with herbicides. But state highways in the same area routinely get hit. (Photo courtesy of Lisa Arkin.)

As Lisa Arkin pilots her Subaru wagon along a highway outside Eugene, Ore., she looks over at the shoulder and shakes her head.

Just past the Willamette River, you can see acres and acres of dead vegetation along the highway, dead from herbicide spray. Arkin is executive director of Beyond Toxics, a non-profit that’s been trying to persuade the state of Oregon to find other ways of maintaining the highways.

"When they spray, people with immune deficiencies — someone going through a cancer treatment, someone with allergies or asthma, you might have children in the car, you might be a pregnant woman — you have no idea that you have driven through miles of a recent spray," she said.

It's state policy to use herbicides along highways. This particular county, Lane County, however, has a no-spray policy. So it makes the distinction between country roads and state roads that much easier to see.

"We start to see–flowers," Arkin said. "And vegetation that is still green."

Lane County is home to the University of Oregon, so opposition to chemicals is common. Organic agriculture is also popular here. Farmer John Sundquist has been an outspoken opponent of the state's spraying policy.

"I have testified before you several times in the past urging you to protect citizens and the environment by stopping the poisoning of state-maintained roads," he testified to a legislative committee last year. "And I asked you to enjoy the green, beautiful, poison-free, salmon and wildlife-enhancing roadsides of Lane County."

So far, he's found little support among state officials to halt the use of glyphosate and other chemicals that disrupt plant metabolism. They can be sprayed once or many times a year.

Will Lackey oversees the Oregon Department of Transportation's spraying program. He says the goal is to create a six to eight-foot cleared area along the road, in order to provide for drainage, vehicle recovery, to mitigate fire hazards and to provide good sight lines along curves.

"We target a lot of just noxious weed control," he said. "We have people out on four-wheelers or even just backpack spraying, just going after individual plants."

In contrast to Oregon, Washington has tried to cut back on its use of herbicides on state highways. They haven't been totally eliminated, but roadside maintenance manager Ray Willard says a review of herbicide use found that a lot was unnecessary.

"I think what was happening at that time is a lot of the decisions that were being made, were being made by the crews out in the field, and so there really wasn’t as much oversight," he said.

The state reduced its herbicide use by about two-thirds. Some areas, it worked well. But in other places, they found it was becoming much more expensive to maintain the natural shoulders. So, in those areas, spraying resumed.

"If we can make very precise, specific applications we can do that very safely in terms of worker exposure and environmental exposure and we are much more efficient and effective in terms of our budget and use of the taxpayers’ money," Willard said.

"I don’t think it’s good for our employees nor do I think it is good for society to be using herbicides when other alternatives are available," she said.

Lackey said Achterman's message was heard. His department has set a goal of reducing herbicide use by 25 percent over the next five years.