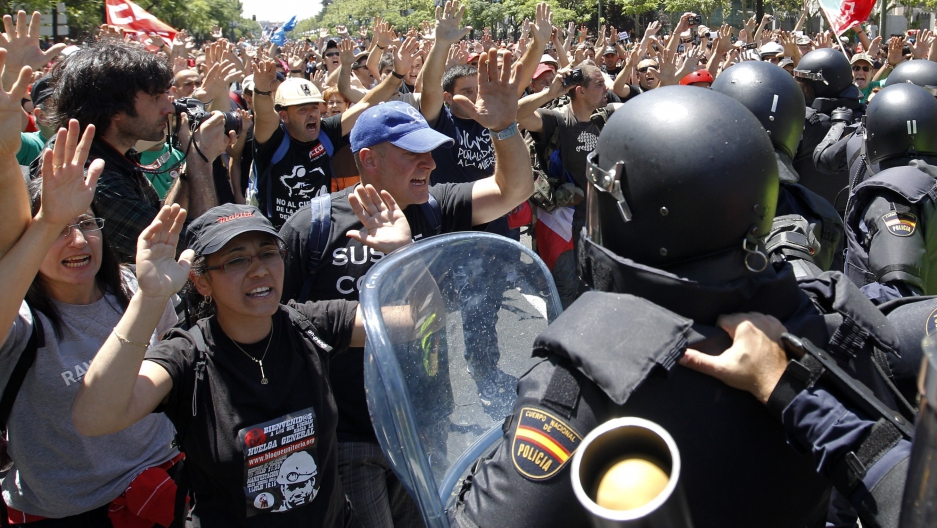 Protests have been limited so far. That may soon change.
Credit: Cesar Manso
Share

MADRID, Spain — Beatriz Martinez graduated with a degree in art history three years ago. She’s worked only eight months since then, mostly telemarketing.

And Diego, who declined to give his full name, is a freelance photographer. He’s spent most of his time volunteering with a protest group that tries to protect families from eviction since his commissions dried up.

More than half of people under 25 here are out of work. That's Europe’s highest rate, ahead of even Greece, which has come close. Spaniards are worried the strain it’s exerting on society is putting stability at risk as the government prepares to cut unemployment benefits among other tough measures aimed at meeting the obligations of a euro-zone bailout.

More from GlobalPost: Will the euro crisis kill soccer in Spain?

However, it says the real situation is worse than the figure shows. Of the 2.4 million under 30 who have jobs, half of them are working on precarious short-term contracts. Another 200,000 are believed to be on unpaid or poorly compensated "internships" the union criticizes for offering no real training. It says many are schemes for unscrupulous businesses to exploit cheap labor.

Hanging out with friends in Madrid's gritty Lavapies neighborhood, Martinez says “nobody” entertains hopes the situation will soon improve. "I lost my last job a week ago, and more than half of my friends are in the same situation,” she elaborates. “And the ones who aren’t probably will be in a couple months."

Like so much that's wrong with Spain's economy, the soaring youth unemployment has its roots in last decade’s property boom.

By the height of the boom in 2007, more than a third of Spaniards between the ages of 18 and 24 had dropped out of high school, more than double the European Union’s average.

"A lot of these kids who left school early in the boom days to work in construction are pretty much unqualified for anything else," says William Chislett of the think tank Real Instituto Elcano.

"No one has any answers in terms of where new jobs will come from,” he adds. “The generation under 30 is pretty much a lost one in this country."

At the other end of the spectrum, there’s glut of overqualified workers.

In most European countries, 40 percent of high school graduates attend university and 60 percent enter vocational training. “In Spain it's the other way round," says Cristina Bermejo Toro, youth secretary at CCOO. "We have people loaded down with degrees, titles and diplomas who are completely unsuited for our labor market."

A growing number of young Spaniards are trying their luck abroad to escape the gloom.

Spain sucked in immigrants from Eastern Europe, Latin America and Africa during the boom years. Now people are flowing out of the country. Official figures show a net flight of almost 89,000 people in the 12 months leading to May. Argentina, Brazil and Germany rank among favored destinations.

Emigration hasn’t reached the levels of neighboring Portugal, where the crisis triggered an exodus to former colonies such as Brazil, Angola and Mozambique, as well as northern Europe. But Spaniards are worried their country may soon lose many of its best and brightest.

With no end in sight to the recession as the government cuts public-sector jobs in an attempt to salvage its finances, few see any chance of improvement.

"There's an enormous feeling of frustration and a sense of hopelessness in the future, that people are going to be worse off than their parents," CCOO’s Bermejo Toro explained. "Their expectations are evaporating."

The disappointment has fed into the “indignados” mass protest movement that ignited in Madrid in May 2011 and has spread to countries around the world.

However, the movement appears to have lost steam in Spain. Despite sporadic flare-ups — including clashes between police and striking coal miners from the northern Asturias region who led a "black march" into Madrid last week — foreign observers have been surprised by the lack of unrest.

Part of the explanation lies in Spain's strong family ties. Many young people still find support from parents and other relatives who saved money during the boom. Spaniards living with their parents well into their 30s is not uncommon.

But there are fears the crisis will strain family networks as it drags on, and that discontent will fuel social upheaval and a Greek-style rejection of mainstream politics.

"More than a million families have no economic resources at all right now," Bermejo Toro says. "Those people can't support their children. If the government cuts unemployment benefits again, I really think we'll see a social breakdown."