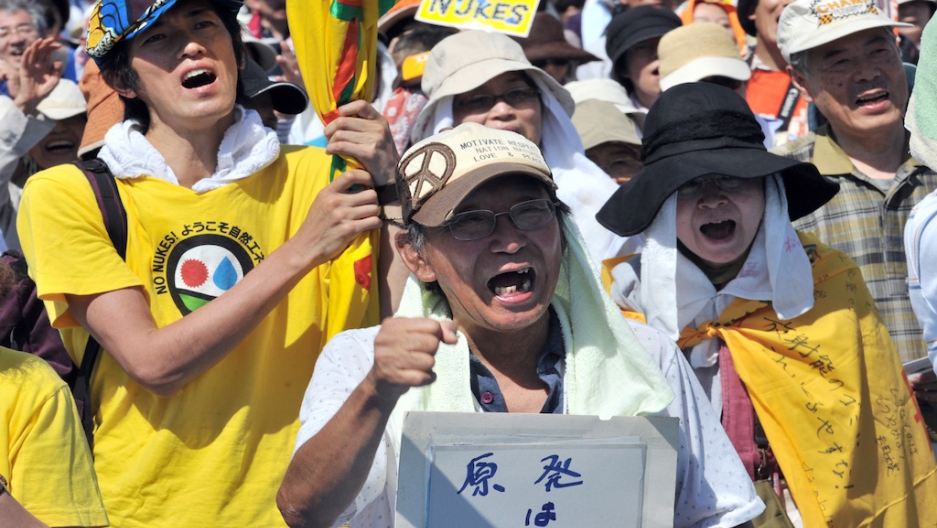 People hold placards to protest against nuclear power plants in Tokyo on July 16, 2012. Tens of thousands of people rallied in Tokyo demanding an end to nuclear power, the latest in a series of anti-atomic gatherings following the tsunami-sparked disaster at Fukushima.
Credit: Yoshikazu Tsuno
Share

TOKYO Japan — In the end, the final head count was secondary. Whether you believe the police figure of 75,000 protesters or the organizers' estimate of 170,000, today's anti-nuclear rally in Tokyo was the biggest the capital has seen for decades, and a sign that popular opposition to nuclear power has endured during the 16 months since the Fukushima disaster.

The searing heat didn't stop a huge crowd from squeezing in to Yoyogi Park to listen to speeches by one of Japan's most celebrated figures in the anti-nuclear movement, the Nobel literature laureate Kenzaburo Oe.

Oe, along with the composer and musician Ryuichi Sakamoto and other activists, is putting together a 10 million-strong petition demanding the closure of all of Japan's nuclear power plants. The group has presented the government with some of the 7.5 million signatures it has already collected.

Their goal of a nuclear-free Japan received a setback last month with the restart of a reactor at Oi power plant in western Japan. A second reactor at the plant is due to go back online later this week.

All 50 of the country's working reactors had been turned off in the months after Fukushima for maintenance, and must pass newly introduced stress tests before they can operate again.

Despite polls showing that a majority of Japanese opposes the restart, the prime minister, Yoshihiko Noda, ordered the reactor back online to avoid possible power shortages in a region that includes the industrial city of Osaka.

The anti-nuclear campaign has given Oe and other aging left-wing intellectuals renewed prominence in a movement that is beginning to break out of its traditional ideological confines.

Many among the crowd came from a generation that cut its activist teeth during protests against the US-Japan security treaty and the Vietnam War in the early 1970s.

But post-Fukushima, the natural anti-nuclear constituency has been joined by younger people who, in many cases, are campaigning for a cause for the first time.

They include the disparate groups and individuals, brought together by Twitter and other social media, who have besieged Noda's official residence in Tokyo every Friday evening for the past several weeks.

Again, estimates of how many are involved vary wildly: organizers claim about 150,000 protesters turned out on June 29; the police insist there were closer to 17,000. Another demonstration is expected this weekend, followed by a candlelight vigil surrounding the Diet building on July 29.

A recent investigation into the causes of the Fukushima Daiichi meltdown has added to the momentum, although some have criticized the "made in Japan" hypothesis offered by the panel's head, Kiyoshi Kurokawa, in the report's preface.

The disaster had been "man-made," the panel said in the body of the report — the result of "collusion" between the government, nuclear regulators and the plant's operator, Tokyo Electric Power Co. (TEPCO).

After decades of acquiescence, people no longer believe official claims that nuclear power is inherently safe and will continue to deliver an energy dividend to a resource-poor nation, Oe said shortly before the demonstration.

"The people of Japan decided to leave everything in the hands of the experts ... we trusted them," he said. "That structure endured, and ended in tragedy in Fukushima. The people of Japan used to consider themselves the beneficiaries of nuclear power, but now they're the victims."

For Satoshi Kamata, a journalist and co-organizer of the protest, the movement marks a sea change in the way pressure is being applied to the government.

"This is the first time in a long time that pressure is coming from the inside, and from individuals rather than trades unions and other groups," he said. "This is like nothing we have ever seen before."

But the noisy crowds in Tokyo have so far failed to move Noda. "He's being extremely Japanese about this," Oe said. "He's trying to forget that Fukushima ever happened and just wants to put it all behind us."

Noda is reportedly aware of the commotion outside his residence every Friday evening. The problem for Oe and his growing band of activists is that, so far, he does not appear to be listening.