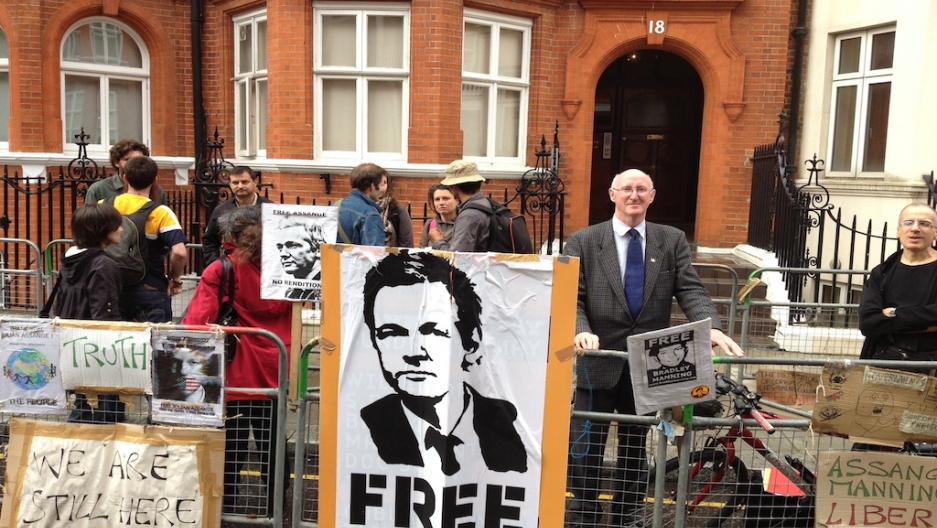 Outside the Ecuadorian Embassy a gaggle of supporters of WikiLeaks founder Julian Assange are clustered under umbrellas and tucked in doorways trying to stay dry.

Their placards, laminated against the rain, state their case: “Free Assange” and “Asylum for Assange. No to Rendition.”

One that reads “Freedom of Expression is a Right” is handwritten in black ink and the words run like tear-stained mascara down a white cardboard poster in a steady downpour.

An armed Scotland Yard officer in uniform is posted at the entrance of the Embassy. Several more police hover on the fringes and in unmarked cars on the narrow street known as Hans Crescent just across the entrance from Harrods. The streets are packed with tourists and shoppers on Friday afternoon in the run up to the Olympics, but few take notice of this little stand-off between the protesters and the British government’s attempts to extradite Assange to Sweden where he still faces allegations of sex-related offenses.

Assange, the Australian-born creator of WikiLeaks, fled into the Ecuadorian Embassy in the end of June hoping that the left-leaning government there might grant him asylum and perhaps even citizenship.

Assange caused an international uproar when WikiLeaks released a trove of some 750,000 sensitive documents and diplomatic cables related to the wars in Iraq and Afghanistan and other delicate international issues. The documents were first obtained by Bradley Manning, a young Army soldier who had access to classified documents in Iraq and illegally downloaded them. He was arrested in May 2010 and faces trial in September on charges of releasing classified documents to unauthorized sources and aiding the enemy, a capital offense. Assange provided the documents to the New York Times and the Guardian who in turn published fact-checked and redacted versions of the documents.

The United States views Assange’s role in the leak of the documents as a crime and many observers consider it likely that U.S. prosecutors will seek to bring charges in connection with their publication.

Assange’s political asylum case is built on a fear that if he is extradited to Sweden that he will end up being extradited to the U.S. where he could potentially face serious, criminal charges. Many prominent international and American figures have supported his asylum bid, from Oliver Stone and Michael Moore to Daniel Ellsberg of the Pentagon Papers.

For now, Assange is ensconced inside the first-floor flat of the Embassy here in London’s posh neighborhood of Knightsbridge. An Embassy official answered the door Friday and then a young man with black Buddy Holly glasses named Joseph came out to politely explain that Assange is not doing interviews right now.

But earlier, I spent some time with Vaughan Smith, the founder of the Frontline Club, who has stood by Assange for nearly two years through his odyssey in the limelight and his legal ordeal.

Smith’s Frontline Club is a gathering place for journalists near Paddington which has become home base in London for many of the world’s foreign correspondents (including this one).

Smith has taken some heat for his support of Assange. Some journalists have disagreed with Smith’s assertion that Assange has as much right to be a member of the Frontline club as any other self-proclaimed journalist. Assange is in the business of digging for information and publishing it, and for Smith it is really that simple.

I am a founding member of the Frontline Club, which opened its doors in 2003. I wrote a pretty tough column in this space on Assange, challenging the notion that trafficking in stolen documents is journalism. But as the smoke settles on the Assange affair and the facts come into focus, it is becoming clear that Smith took a bold and principled stand.

Smith was right to stand up for Assange and defend his release of hundreds of thousands of documents and diplomatic cables that dragged the U.S. and U.K. and other governments into the glaring light of transparency on the wars in Iraq and Afghanistan, even if they came kicking and screaming.

Over a long lunch with Smith at the Frontline Club, we talked about the Assange affair and the sad state of traditional journalism as we knew it back in the lush days of mainstream media when we were covering Afghanistan in the 1990s. But we also shared the excitement in the air about opportunities that lie ahead in the digital age.

“In the final balance sheet, I think any professional journalist who studies the facts would conclude that the release of documents – the sum of them all – was a great public service,” said Smith.

The British press in particular, he said, personalized the Assange story, and missed the larger point of the documents and what they told the world about how power works.

Smith said he had done a Google search of British newspapers several months ago and found that the word “Assange” appeared 7 to 8 times more often than the word “WikiLeaks.”

Yet, the media accuse Assange for chasing the limelight, Smith points out. At the Associated Press, the ratio of Assange-WikiLeaks was 3 to 1, and it's now 2 to 3, in Wikileaks' favor. But, in newly industrialising countries, the focus is more on the content of the documents, not the man. Smith points out that a Google search of the Hindustan Times revealed that Assange is mentioned only once for every three times that WikiLeaks is mentioned. The Hindustan Times alone did 20 front pages on the release of the documents.

“That suggests to me that the world is more interested in the content than the man and that perhaps we in the Western media misunderstand just how valuable these documents are to the developing world,” said Smith.

“Assange has given us information that allows us to understand how our governments act in the world, and how corporations act in the world… If diplomats have secrets to keep, it is their job to keep them. We as journalists and as representatives of the public’s right to know should be arguing for the least amount of secrets possible,” said Smith.

As a father of five children and a retired Captain in the Grenadier Guards, a storied British army regiment, Smith is heir to a large farm in Norfolk that has been in his family for 250 years. He’s hardly a radical.

“I’m a member of the establishment, a mischievous one, but a member nonetheless,” says Smith, who has allowed Assange to stay with him on his family farm for much of the last two years.

“We as journalists are defined, and best understood, by our ability to be tolerant of many points of view. Assange challenges us as journalists to rethink what we do and I think that is a good thing,” said Smith, who hosted a press conference for Assange at the Frontline Club and eventually the club granted him membership.

“There is a tendency of journalists to guard their profession, to see it as a club, that it is somehow exclusive,” he says, as we sit back in the leather couches of the Frontline Club surrounded by the photos, signed books, framed photographs, famous front pages and the memorabilia and keepsakes of the old guard of mostly British foreign correspondents.

Smith smiles at the irony laden in his words before I can call him out on it.

He turns a glass half-filled with white wine in his right hand and quickly adds, “He’s stirred up journalism, and he’s challenged our notion that we hold the exclusive right to control the information. We don’t. Not anymore.”

In the throes of the complex process and paperwork required to prepare a case for political asylum in Ecuador, Assange has been meeting with lawyers on and off, particularly Gareth Pierce, the fierce human rights lawyer who represented so many Irish Republican activists in the height of The Troubles in Northern Ireland.

Among the Assange supporters there on the sidewalks was Jim Curran, 65, the head of the Irish Civil Rights Association and a long-time activist against the use of extradition of Irish prisoners. Wearing a tweed jacket pierced with a pin of an Irish flag, he said the history of the British exploiting extradition for political purposes has a nearly 500 year old history and that Assange is just the latest victim.

Niall Taylor, 45, a high school history teacher and an Assange supporter, said, “WikiLeaks is about letting us know the truth about what our governments are doing in our name, and you can’t have democracy without that.”

Taylor spoke with a thick Scottish accent and had a Red Sox cap pulled down tight against the rain. The fact that he has chosen this baseball team to follow, of course, says everything we need to know about his enduring faith in and penchant for underdogs and lost causes. He said he was well aware the Red Sox have been dwelling in last place this summer, but he was still a fan.

When asked why he is spending his afternoon in the rain showing his support for Assange, he said, “It’s important to support people who are telling the truth. That’s it, really.”