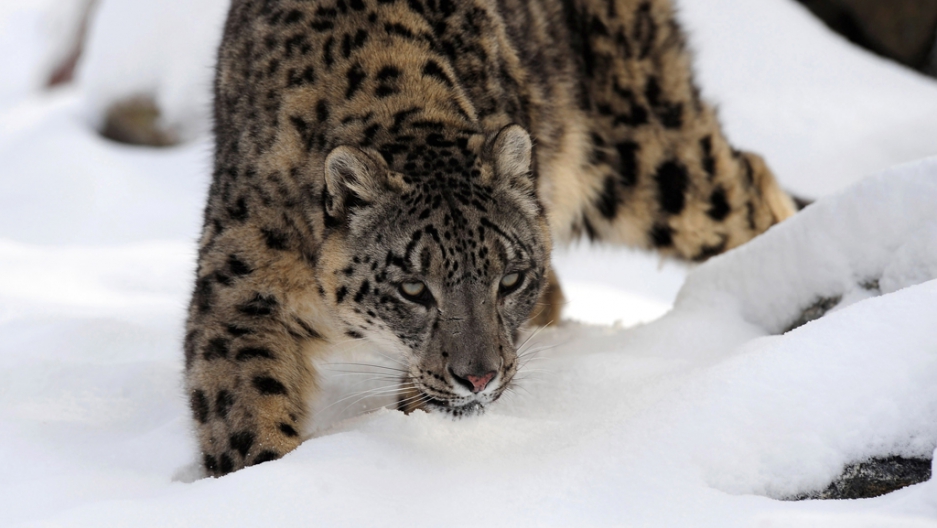 A Snow Leopard walks in the snow at Banham Zoo on January 7, 2010 in Norfolk, United Kingdom.
Credit: Jamie McDonald
Share

Scientists have videotaped a mother snow leopard and her cubs in their den in Mongolia's Tost Mountains — the first time a family of these notoriously elusive big cats has been both located and filmed in their den.

The dens were closely monitored by scientists hoping to record snow leopard behavior and add to the limited knowledge of their reproductive habits.

To the researcher's delight, two of the dens have been occupied by snow leopard mothers and their cubs.

Scientists managed to shoot video of mother and cubs using a camera mounted to "an extended pole" according to a press release. Researchers have also been able to weigh, photograph, and microchip the wild cubs while their mothers are away hunting.

“Knowledge about the first days and weeks of life is vital to our understanding of how big cat populations work, and how likely it is for a newborn to reach adulthood and contribute to a healthy population," commented Dr. Howard Quigley, Panthera's executive director of jaguar and cougar programs.

"A valid conservation program requires such information, which this new development in snow leopard research provides."

Snow leopards are one of Central Asia's most iconic and mysterious animals, and relatively little is known about their habits in the wild. Weighing up to 120 pounds, the agile cats have remarkably long, fluffy tails, which they use for balance as they hunt on steep mountain cliffs.

Their beautiful fur and tendancy to hunt domestic animals has driven their numbers into a steep decline. Endangered, they are now rarely seen, and tend to hold on only in the most remote places.

“We have spent years trying to determine when and where snow leopards give birth, the size of their litters, and the chances a cub has of surviving into adulthood," said Dr Tom McCarthy, executive director of Panthera's Snow Leopard Porgram.

"This is one of those exceptional moments in conservation where after years of effort, we get a rare glimpse into the life of an animal that needs our help in surviving today’s world. These data will help ensure a future for these incredible animals.”