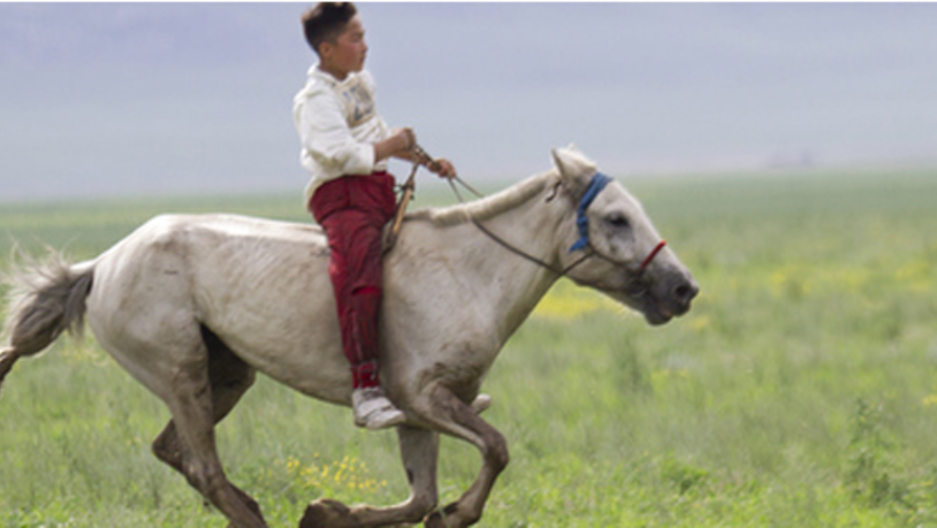 A young jockey races through the grasslands of Mongolia during a race in Ugtaal's Naadam celebration.

Share
Inside a ramshackle stadium in the Mongolian town of Uugtaal, around 40 kids prepare for a 14 mile horse race. They encourage their horses — and themselves — with a song. A few hundred people are participating in this county-level Naadam. The events mainly take place in this small brick arena on the edge of town. Just before the race, the small jockeys gather on their horses to fortify themselves with "airag," a mildly alcoholic drink made from mare's milk. They pour some on their horses' heads and hind quarters. The kids are led out to the starting line by a man carrying a Mongolian flag. Then, they race out into the open steppe. The Naadam events date back to the 13th century, around the time of Genghis Khan. The games were said to be a way to mark victorious campaigns and to train young warriors. Sanjmyatav, a wrestling referee, said the skills have been passed down from father to son for generations. "After judging wrestling competitions for about 17 years, I have seen generations of wrestlers," he said. "They are wrestling just as their fathers, grandfathers, and ancestors did centuries ago." In recent years, as Mongolia has experienced unprecedented economic growth and urbanization, the popularity of the ancient Naadam games has been growing as well. People who have left their villages for the nation's capital, Ulaanbaatar, travel back to their hometowns for local celebrations. "During Naadam, people who were born here or whose families come from this region want to return," said Munkbayar a racehorse owner. "Even I came from Ulaanbaatar." He said he thinks everyone wants to come back and people who haven't met for a long time meet each other at Naadam, because it only happens once a year. But things aren't entirely traditional. And there are trappings of modernity: Trucks selling coca-cola, ice cream bars, and plastic toys set up each morning outside of the stadium. Wrestling, the mainstay of Naadam, is now a professional sport. These days fans can enjoy the festival on TV and cameramen film the horse race from SUVs. And the roster of events has grown. Another traditional game has been added. Inside the stadium, just yards from where pairs of burly young men wrestle, four elders sit in a row playing a game called "shagai." It involves small, carved pieces of bones that are plucked from about five feet away at targets made of sheep ankle bones, lined up on a platform. The object is to knock down as many of the target bones as possible, along the lines of bowling. Spectators yell out 'Uhai,' a Mongolian form of 'Hooray,' as a way to encourage the players. Despite Mongolia's rapid modernization, there seems to be little chance that at least one of its traditions is going away anytime soon. "Mongolian Naadam is very nice," said a local female onlooker. One of the county's top archers is a woman. Not uncommon in these games, despite their supposed "manly" nature. She's optimistic about Naadam's future. "Mongolians have never stopped the ancient traditional game," she said. "And it is becoming even more popular. Horses are getting faster, and there are more wrestlers and archers. Naadam is improving and growing. And now Shagai is being added. It is good and I hope these sports continue to develop in Mongolia." Outside the stadium the young horse racers whoop and holler as they reach the finish line after a 30 minute sprint. 10-year-old Maralmaa takes home the glory, while her horse's owner receives a cash prize. Lauren Knapp is a Fulbright Fellow based in Mongolia. Her work comes to us thanks to The Vanishing Cultures Project, which Documents Traditional Cultures Going Through Rapid Change.