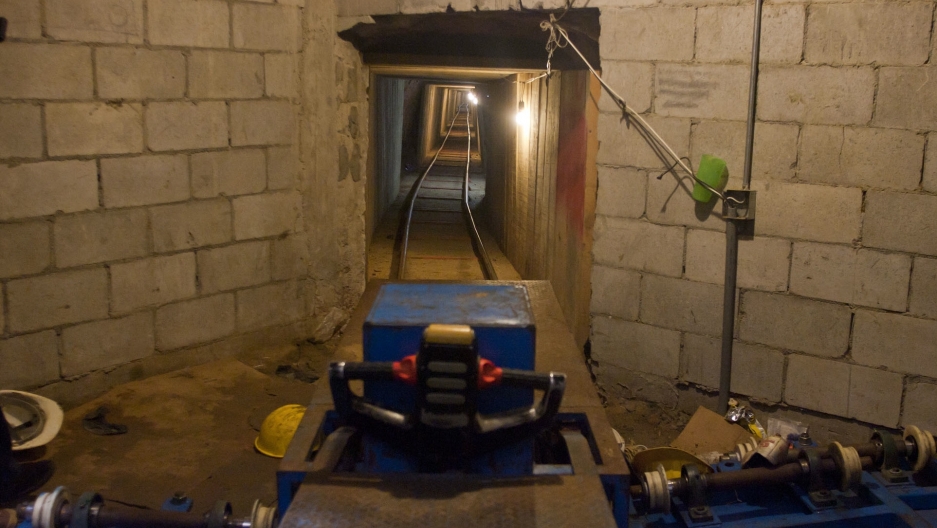 Magic tunnel: Put drugs in one end in Tijuana, Mexico, and zoom through the tunnel! The package arrives in San Diego, California. Mexican authorities found this tunnel in November 2011. Dozens of others have popped up over the years.
Credit: Francisco Vega
Share

GUADALAJARA, Mexico – The Mexican army on Thursday seized 40 tons of marijuana stashed at the entrance to a drug smuggling tunnel in Tijuana – the third such secret passage discovered on the US-Mexican border in less than a week.

According to the Associated Press, the unfinished tunnel started in a warehouse and extended nearly 1,200 feet, including more than 300 feet into the United States, and was equipped with a railcar system.

On Wednesday, the army stumbled upon another drug smuggling tunnel, this one 755-feet long, running across the Sonora-Arizona border and fitted out with ventilation and small cars to transport drugs into the United States.

Last Saturday, authorities found a finished, plywood-lined tunnel in a vacant strip mall storefront in the southwestern Arizona city of San Luis that stretched 720 feet across the border to an ice-plant business in the Mexican city of San Luis Rio Colorado.

More from GlobalPost: Drug-smuggling tunnel from Mexico to US discovered (VIDEO)

Tunnels have become a common way of transporting huge quantities of heroin, marijuana, methamphetamines and other drugs across the border as US authorities tighten control.

According to the AP, more than 70 secret passages have been found on the border since October 2008.