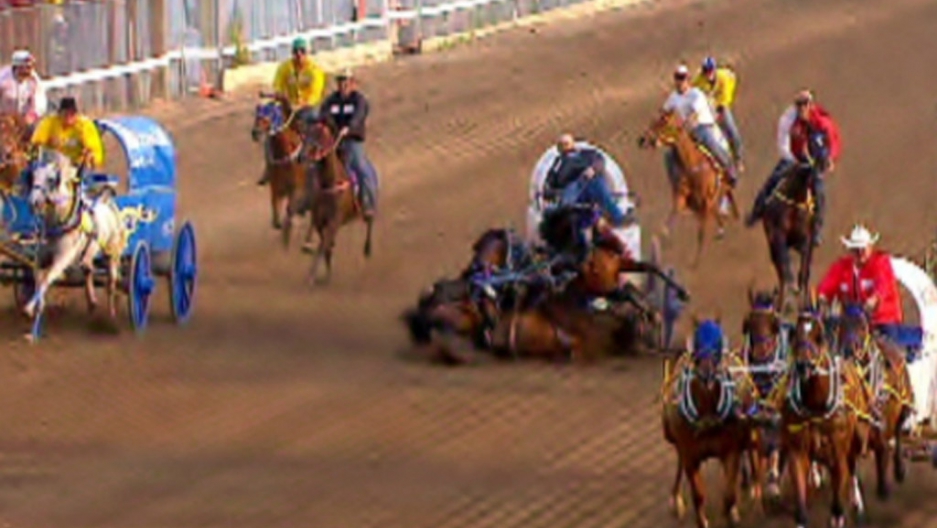 One of Chad Harden’s horses apparently collapsed and died during a chuckwagon race at the Calgary Stampede on July 12, 2012, causing the others on the team to crumple to the ground. Three horses died.
Credit: CBC
Share

The Calgary Stampede has “run out of excuses,” animal activists say, after three horses died during a chuckwagon race at the annual rodeo late Thursday.

The Calgary and Vancouver humane societies each called for the races to end after the gruesome incident on the racetrack during chuckwagon races.

“The Stampede has run out of excuses,” Vancouver Humane Society spokesman Peter Fricker said. “Now is the time to take real action to stop these horses from dying.”

“Clearly, the Stampede’s much publicized safety improvements have failed to make the race any safer,” he added. “Horses continue to die needlessly. This has to stop.”

Chuckwagon racing is a rodeo’s fastest and, perhaps, most dangerous event.

Cowboys race wagons pulled by four-horse teams through a figure eight before heading around the racetrack.

It is rodeo’s version of NASCAR and, just like the stock cars, it’s equally thrilling and terrifying – especially the crashes.

More than 50 horses have died since 1985, the Vancouver Humane Society said.

On Thursday, one of Chad Harden’s horses apparently collapsed and died during the race causing the others on the team to crumple to the ground.

One other horse was injured, CBC reported. Stampede veterinarians had to euthanize two horses on the track.

Harden told reporters that his family is devastated.

“We love those horses,” he told CBC. “The outriding horse is an 18-year-old horse; I’ve had him for 13 years. He’s part of our family; he’s supposed to be my kid’s horse.”

They’ve halved the number of “outriders” in the event to two, and mandate strict veterinarian checks of all horses before and after races.

“It’s a sad situation, but we will investigate the incident to determine what happened in the hopes we can prevent it from happening again,” Stampede spokesman Doug Fraser told The Post.

The Stampede is 100 years old this year.

The Calgary Animal Rights Coalition is planning a protest on Saturday, while the Calgary Humane Society said the crash reinforces why the group opposes “the use of animals for entertainment,” according to the Calgary Herald.